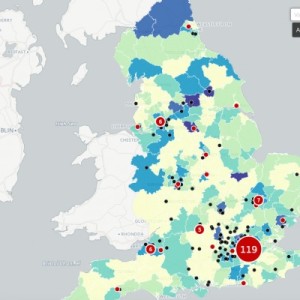 It is increasingly recognised that some of the most important open data is published by local authorities (LAs) – data which is important to us like bin collection days, planning applications and even where your local public toilet is. Also given the likely move towards greater decentralisation, firstly through devolution to cities, the importance of the publication of local open data could arguably become more important over the next couple of years. In addition, as of 1st April, there is a new transparency code for local government requiring local authorities to publish further information on things like spending to local land assets. To pre-empt this likely renewed focus on local open data we have begun to develop a prototype map to highlight the UK’s local open data ecosystem.

Already there is some great practice in the publication of open data at a local level – such as Leeds Data Mill, London Datastore, and Open Data Sheffield. This regional activity is also characterised not just by high quality data publication, but also by pulling together through hackdays, challenges and meetups a community interested in the power of open data. This creates an ecosystem of publishers and re-users at a local level. Some of the best practice in relation to developing such an ecosystem was recognised by the last government in the announcement of a group of Local Authority Open Data Champions. Some of these were also recipients of the funding for projects from both the Cabinet Office and through the Open Data User Group.

Outside of this best practice it isn’t always easy to understand how developed smaller, less urban open data agendas are. Other than looking at each councils’ website or increasingly on the data portals that forwarding thinking councils are providing, there is a surprisingly large number of places that local authorities could make their open data available. The most well known of these is the Openly Local project but at the time of writing this now seems to be retired. Perhaps the best catalogue of local authority data is on Data.gov.uk itself. This has 1,449 datasets published by LAs across 200 different organisations. Following that there is the Open Data Communities website which hosts links to LA linked datasets. Using data from the latter, Steve Peters has developed the local data dashboard (which was itself based on the UK Local Government Open Data resource map from Owen Boswarva). In addition, local authorities can also register their open data in the LGA’s Open Data Inventory Service and take it through the ODI’s data certification process.

To try to highlight patterns in local authority open data publication we decided to make a map of activity around the country (although in the first instance we’ve focused on England). Our aim has been to show where the data publication hotspots are, the quality and breadth of the publication, as well as how it is loosely associated with broader data activity – such as local open data businesses, meetups and ODI nodes. The first step in creating our map was to draw together relevant datasets. We started with the data powering Steve Peters’ local data dashboard which came from Open Data Communities. This provided us with a list of all the local authorities in England as well as their open data landing pages and any additional open data portals that are available.

Each composite was summed to generate the total score and no weighting was applied. All data and calculations are shown in this Google Sheet. Having created this scoring across local authorities we then used CartoDB to map the information which you can see below with the full map accessible here:

The map also includes the data on data meetups from the work that Juan Mateos-Garcia undertook as well as an overlay of the ODI data on open data businesses and nodes. This is very much a first go at visualising this data and we’d welcome comments and suggestions on our approach. At the moment we haven’t found a nice way to display data in relation to upper and lower tier open data publication and so they overlap and look a bit messy – recommendations on how to approach this gratefully received. We could also improve the analysis by looking at the quality of the open data available not just whether it’s available on other websites as an indicator of accessibility. Please do highlight where we’ve got anything wrong or any ideas where we could improve our analysis.

A next step for us from an organisational perspective could be to see how this map looks when contrasted with the location of projects that we’re funding that are using open data for instance through the Destination Local project supporting some hyperlocal organisations to re-use local open data, or the Digital R&D Fund for the Arts data projects.

We think even this initial analysis highlights some interesting patterns. For instance there seems to be an urban/rural split where there is clearly greater number of open data availability about urban areas and cities compared to rural local authorities. This seems intuitively correct – and also seems to be a pattern in both the nesta analysis of Meetup data and the ODI open data businesses study. If you spot any other patterns or have any other insights please do leave them in the comments below.

This post was created automatically via an RSS feed and was originally published at http://www.nesta.org.uk/blog/local-open-data-ecosystems-prototype-map