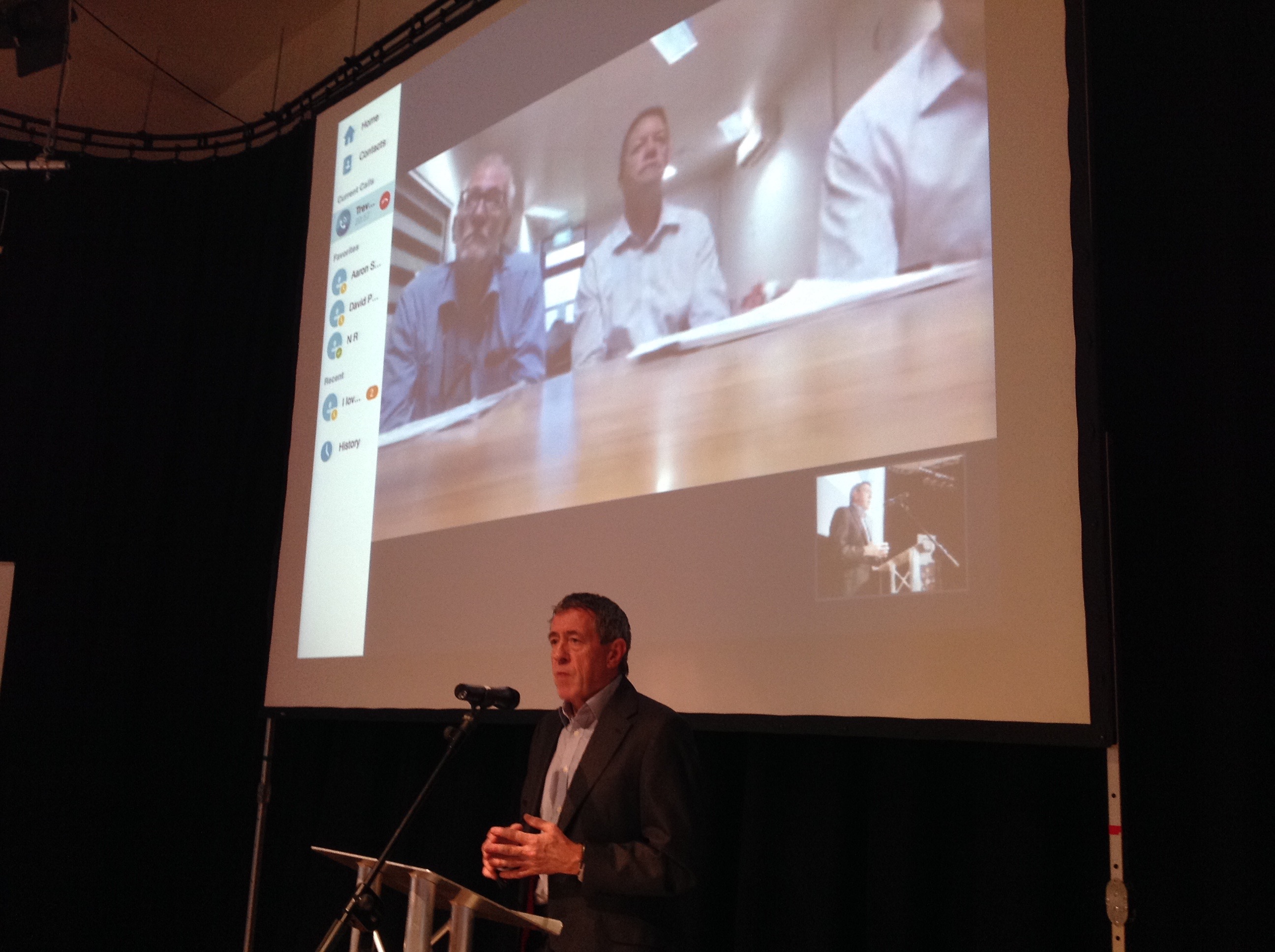 This is the first in a series of posts about an event: Using Data as a policy maker, which was held in Winchester, in November 2015.

Wearing my ‘Open Data Aha!‘ hat*, I teamed up with Southern Policy Centre and Know Now Information to organise Using Data as a policy maker, which was held in the Performance Hall in the Winchester Discovery Centre.

If you aren’t already familiar with them:

In this post I’m going to talk a little about the event, and focus on some aspects of a talk delivered over Skype by colleagues from the Australian City of Bendigo.

There was a superb lineup of speakers, including Trevor Budge and several colleagues from Bendigo in Victoria, Australia who sacrificed their evening to share their experiences with us, and Jamie Whyte who travelled all the way to to Winchester and back from Trafford by train, resulting in a very long day. The full line-up of speakers was:

John briefly welcomed attendees on behalf of Southern Policy Centre, and thanked Bendigo colleagues for giving-up their evening in order to share their experiences with us. He then handed over to Cllr Keith Mans, Deputy Leader of Hampshire County Council.

Cllr Mans summarised Hampshire County Council’s own data policy, which is to be open by default. He explained that the Council aims to routinely use open data as part of the evidence base for Council policy making.

I was really pleased to hear Cllr Mans add that he’s personally very enthusiastic about open data, and is a keen supporter of Hampshire Hub.

Although it was first thing in the morning for us in the UK, it was evening in Australia, and Cllr Mans quickly handed over to Trevor Budge and colleagues in Bendigo to share their experiences with us. As he did so, Cllr Mans mentioned that several of his own grandchildren live in Bendigo. Small world…

Trevor Budge and colleagues gave a fascinating talk about how data helps to inform policy and decision making in Bendigo. I was a little anxious early-on, when Trevor said words to-the-effect that the sheer volume of data relating to Bendigo can cause delays, as people want to probe more, before making a decision. Given the sums of money sometimes involved in public services, and the potential impact on people’s lives, I don’t think that’s necessarily a bad thing.

I was already aware that the Victorian Government is very strong on open data – it’s been progressively opening-up spatial and other data on data.gov.au, including statistics to other departments and the public – but what I was less aware of is just how bigan issue (lack of) water has become in Australia in recent years.

The city of Bendigo is in one of the driest areas in Australia, and is already being impacted very heavily by climate change. Consequently, data about water is absolutely critical to policy and decision making.

While “average” rainfall (at 525mm per year) in Bendigo doesn’t look too bad when viewed over several years, that average is calculated from extreme wet and (most recently) extreme dry. Most farmers have been unable to harvest a crop in the last year, and every drop of water is precious.

Call that a farm?

Some farms in Australia are vast, running to hundreds of thousands of hectares. Much of the natural vegetation was cleared over a 150 year period to make space for grazing and crops, and it’s believed this has contributed to the extreme dryness currently being experienced throughout much of Australia.

Once vegetation is cleared, there’s nothing to bind the topsoil, much of which then gets lost through erosion. Additionally, salt is a major issue, as it’s brought to the surface when evaporation exceeds the amount of water added. There are now strict controls in place to try and mitigate this. I was amazed to hear that even the largest landowners have to get permission to cut down just a couple of trees on their land.

Data as a resource

With such great emphasis on water, erosion, salt and vegetation, really detailed mapping is needed, and organisations like the Bureau of Meteorology provide vast amounts of very detailed data. This requires huge computing capacity, which is increasing exponentially all the time. They map not just high level weather data, but also provide maps tailored to different segments of customer base, including farmers, state government, and policy makers.

There are climate mitigation measures, such as the government buying pollution credits from big business. Water is bought and sold for irrigation and agriculture, and is assigned a use – you cannot buy or sell water unless it’s been an assigned a use.

Regulation and control exist at local, state and federal level and – while these extreme measures haven’t completely resolved the problem – the signs are that fundamentally it’s working, and crops like rice and cotton are being replaced by higher value crops.

Since the event, I noticed the excellent National Map which gives map-based access to spatial data from Australian government agencies, including all sorts of water-related layers.

I’m conscious this could become a lengthy blog post, so I won’t go into detail about the other aspects of the Bendigo talk which caught my attention, but it’s worth noting that that data (private, shared, and open) is being used to inform policy in various other areas.

Indicators are another good example of how data is helping to inform policy. Instead of a lengthy debate about priorities, policy makers used the indicators, and the entire debate about what would be the top three, took just five minutes. They are:

Data through many lenses

The are so many ways of looking at the data, that Bendigo uses a variety of apps and websites, some the links for which are included below:

In my next post I’ll take a look at some of the other excellent presentations given during the event.

* Not literally – I don’t actually possess an Open Data Aha! hat**
** having said that, I might just get one – wonder what type of hat it would be?