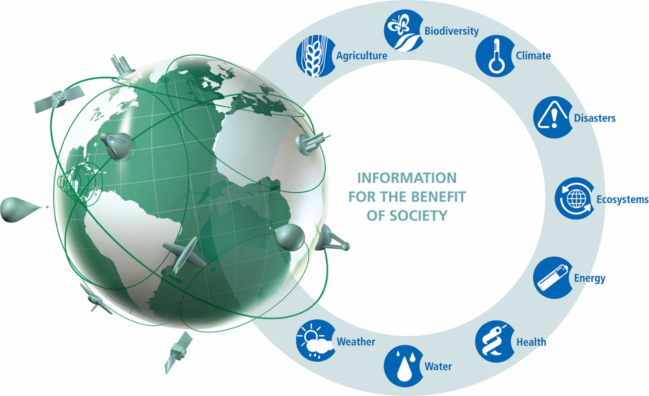 Partners of the Global Open Data for Agriculture and Nutrition (GODAN) initiative call for political leaders at COP21 to make the most obvious data open; “farmers need weather data in order to adapt to climate change”.

Since the release of the first assessment report on climate change in 1990 the Intergovernmental Panel on Climate Change (IPCC) has used shared data to drive the scientific proof for climate change and it’s repercussions for society. Members of the World Meteorological Organisation (WMO) have worked on sharing data and interoperability in order to improve the shared understanding of climate change and create general consensus on this subject.

This work is still ongoing to provide society with the best knowledge about climate change as is possible but it is clear that IPCC has already succeeded in delivering a firm scientific foundation for policy. Without the willingness of contributing organisations to share data among each other it would not have been possible to produce the assessment reports we have. Increasingly climate change scientists have been using open data to do their work as more data comes available through open data portals.

Over the course of time, since 1990, our understanding of adaptation has become more mature as the public realizes that, even if we succeed in dramatically reduce the amount of greenhouse gases (GHG), we will still face climate change from our past emissions.

This notion urges our generation to think about vulnerabilities and the impact of climate change on society.

The World Farmers Organisation conclude in their COP20 statement: “As parties work towards a new climate agreement in Paris next year, we urge them to acknowledge that farmers are particularly vulnerable to climate change and without support their livelihoods and global food security is at great risk. Parties need to urgently agree on a framework for ambitious and far-reaching actions to support adaptation and mitigation in agriculture,”

Farming is currently part of the problem as well as a source for potential solutions; one Third of the world’s GHG emissions come from agriculture, the world, and especially rural areas and food production systems faces a huge challenge to adapt to climate change.

Climate Smart Agriculture (CSA) approaches can help. CSA approaches aim to invest more in managing climate risks, understanding and planning adaptation ánd exploring ways to reduce GHG emission. A nice example of a tool that can be used in this approach is the Agro Climate Calendar to assess the risks of farming practices subject to extreme weather and climate induced pests and diseases.

Overview of how climate and other factors influence food security through production aspects and others aspects of food systems. From AR5 WGII. The thickness of the red lines is indicative of the relative availability of refereed publications on the two elements used in AR5 WGII.

From CGIAR-CCAFS: “Climate-smart agriculture (CSA) is an integrative approach to address these interlinked challenges of food security and climate change, that explicitly aims for three objectives:

What is the role of open data for Agriculture?

We are living in an information age where data is increasingly becoming an integral part of our lives. In the future data will likely play a more central role in many aspects of society. People and machines become more connected with the internet and an. Farming will be no exception. A new generation of precision agriculture generates masses of useful data if only we can find ways to share it meaningfully. Data will be instrumental in the support of concepts such as CSA. To be able to achieve investments in managing climate risks, understanding and planning adaptation and exploring ways to reduce GHG emission there is a need for information and knowledge exchange. Unfortunately, for many parts of the world information is lacking because it has never been collected in the first place, or because there are barriers to making it freely available.

Investments in sourcing critical data sets and in making them open will be instrumental in achieving the CSA goals. Freely available information, especially in the context of developing countries can enhance the evidence based decision making for farmers and policymakers for better adaptation and mitigation. An example of activities to make data available is through the work by the Group on Earth Observation (GEO) on GEOSS.

Target sectors for the Group on Earth Observation (GEO) on GEOSS.

What datasets are likely to be useful for this approach?

The number one dataset of global value to agriculture, including farmers large and small is weather data. Especially in the context of adaptation, historical data, operational forecasts and climate change projections are all important and currently they are lacking in many parts of the world. So how about that app on our smartphones that seems to work worldwide? The present day global weather forecasts services found on smartphones are not very useful for most of the world’s rural areas as they are don’t deliver all the appropriate variables and don’t have the accuracy and fine resolutions needed for agriculture applications.

To protect livestock keepers from drought related asset losses insurance is a good coping and adaptation strategy. Satellite based information on crop status (NDVI) is used to assess the availability of fodder crops in dry areas of Eastern Africa for livestock farmers. This data is combined with livestock mortality data from the Kenya Arid Lands Management project to predict livestock deaths against which livestock herders can insure themselves. This livestock insurance service is initiated by a consortium of public, private and non-profit partners. The consortium pursued a comprehensive research agenda aimed at designing, developing and implementing market mediated index-based insurance.

Farmer in East Africa who has insured his herd with IBLI. Image courtesy from IBLI.

A recent collaboration between public (open) and private data sources is helping farmers take precautions to avoid drought damage in Colombia. Between 2007-2013 an association of farmers (National Federation of Rice Growers; Fedearroz), an international research centre (Centro Internacional de Agricultura Tropical; CIAT) and Colombia’s Ministry of Agriculture joined forces to identify the issues behind yearly reductions in rice crop yields, one of the most important food crops for the country.

Making use of both open and private data (the latter obtained from companies through special agreements), CIAT analysed large datasets from annual rice surveys, harvesting records, field experiments and weather data and identified the complex and region specific issues behind the decreasing rice crop yields. This led to the development of a climate-smart agriculture decision-making tool for the Colombian rice growers, which is openly available to anyone.

The impact on the agricultural sector as well as the Colombian economy was significant. Actions informed by this data helped farmers avoid extreme damage from the drought saving an estimated $3.6m of potential economic losses.

California is experiencing one of its most severe droughts on record. Water shortages pose a critical threat to the agriculture sector, which accounts for 80% of water consumption across the state. Economic estimates in 2014 predicted direct costs of $1.5bn to the agricultural sector, and the loss of 17,000 jobs on top of reduced food production. To ensure a safe and sustainable water supply, the California Department of Water Resources announced a water rationing plan, reducing water allocation to farmlands and cutting consumer water usage by 25%.

Open data is being used to inform how the state allocates its scarce water resources under these conditions. The drought has been visualised by the US Geological Survey (USGS) with publicly accessible open data collected by the USDA’s network of research facilities, on long-term physical, chemical, and biological data on agricultural sustainability, climate change, and natural resource conservation at the watershed or landscape scale. This allows researchers and policy-makers to monitor conditions and plan water management. Models based on the data, which is constantly updated, estimate actual water volume levels, water consumption and other factors, allowing for timely forecasting and decision making regarding how much water to use in agriculture.

The US Department of Agriculture (USDA) is also making research data related to the California drought open. Dr. Catherine Woteki, Under Secretary for the United States Department of Agriculture’s (USDA) Research, Education and Economics division, hopes this will “stimulate the use of open data by both the private and public sectors to give decision support for farmers on water use, crop choice [and so on].

Snapshot of the California Drought Monitor for April 22, 2014, the darker the color the more extreme the drought is. Image Courtesy: USDA.

In the past, farmers struggled with predictive climate models that failed to take into consideration local conditions, leading to inefficient risk calculations. Climate Corporation is an open data business that offers more accurate insurance and a commercial advisory service to help farmers manage and adapt to climate change. They do this through analysing huge volumes of data points from open and other data sources, to simulate weather events and assess risk to the yield of specific crops.

The company utilises open data from sources including the National Oceanic and Atmospheric Administration (NOOA), the Next Generation Radar (a network of 159 Doppler radar stations operated by the National Weather Service), as well as maps of terrain and soil types from the U.S. Geological Survey. Farmers can use the detailed weather forecasting data to enhance their cultivation practices and activities like spraying, fertilising and seeding. For example, using moisture and precipitation maps provided by the company, farmers can tell if a specific part of their fields is too wet to be ploughed. On an industry level, the impact of the company’s open data-powered service could be significant. In 2013 Climate Corporation’s customers farmed more than 10 million acres.

Cultivar testing is an important means of improving crop varieties. A wide range of trials are taking place on sites all over the world, addressing issues such as drought tolerance, heat stress, and soil management. However, almost all of the data generated has been inaccessible to other researchers – filed away on laboratory hard drives, or sometimes lost completely due to bad data management.

By compiling data from agronomic and plant breeding trials and making it open, the Global Agricultural Trial Repository (AgTrials) hosted by a CGIAR Research Programme on Climate Change, Agriculture and Food Security (CCAFS) offers a rich knowledge base to inform ongoing, collaborative research, while eliminating unnecessary and costly duplication of efforts. Scientists used 250 open AgTrials datasets to build crop models specific to the West Africa region. The models are used to project the local impacts of climate change, and define breeding programmes for adaptation.

The Guardian Post on ‘Will politicians embrace open data at the COP21 climate talks?’ 2015

Food and Agriculture Organisation (FAO) publication on What is Climate Smart Agriculture (CSA)? And why is it needed?

The Open Data Institute (ODI) guides on How to apply Open Data?

GODAN and ODI discussion paper on How can we improve agriculture, food and nutrition with open data?