↓ Skip to Main Content
Home › Benefits of open data › How Many Stars Would You Give the TSA? Review Federal Agencies on Yelp…and Maybe Get a Response

How Many Stars Would You Give the TSA? Review Federal Agencies on Yelp…and Maybe Get a Response 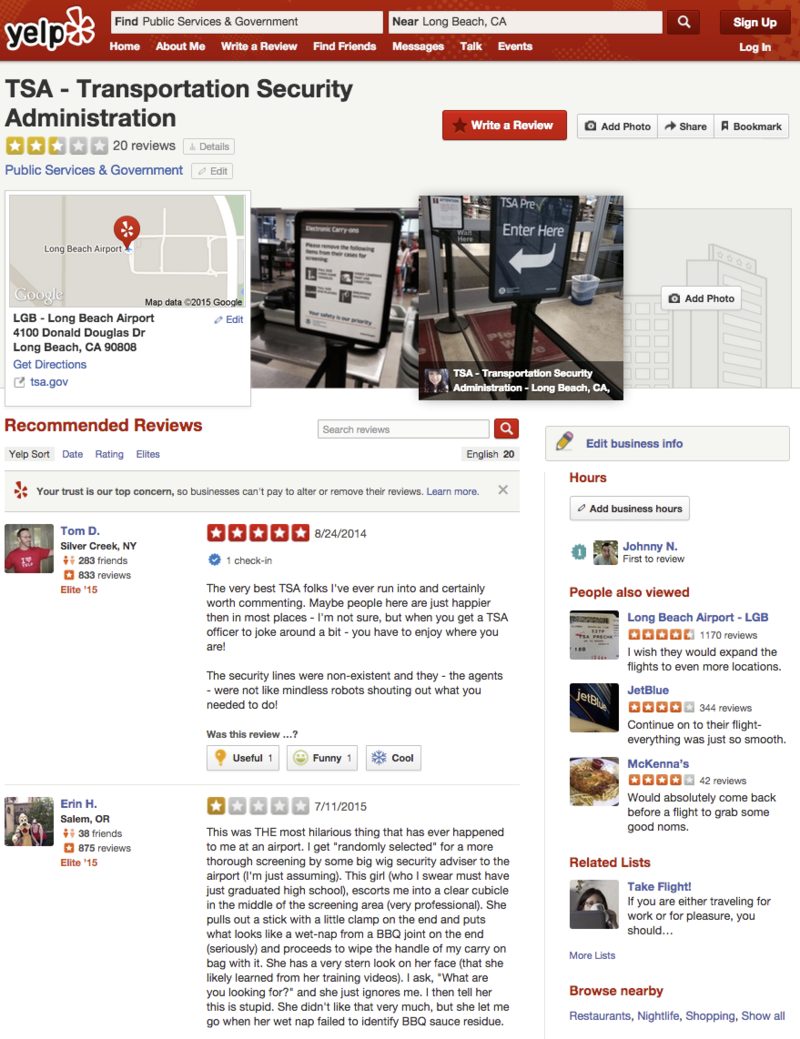 We are excited to announce that Yelp has concluded an agreement with the federal government that will allow federal agencies and offices to claim their Yelp pages, read and respond to reviews, and incorporate that feedback into service improvements.

We encourage Yelpers to review any of the thousands of agency field offices, TSA checkpoints, national parks, Social Security Administration offices, landmarks and other places already listed on Yelp if you have good or bad feedback to share about your experiences. Not only is it helpful to others who are looking for information on these services, but you can actually make an impact by sharing your feedback directly with the source.

It’s clear Washington is eager to engage with people directly through social media. Earlier this year a group of 46 lawmakers called for the creation of a “Yelp for Government” in order to boost transparency and accountability, and Representative Ron Kind reiterated this call in a letter to the General Services Administration (GSA). Luckily for them, there’s no need to create a new platform now that government agencies can engage directly on Yelp.

As this agreement is fully implemented in the weeks and months ahead, we’re excited to help the federal government more directly interact with and respond to the needs of citizens and to further empower the millions of Americans who use Yelp every day.

In addition to working with the federal government, last week we announced our our partnership with ProPublica to incorporate health care statistics and consumer opinion survey data onto the Yelp business pages of more than 25,000 medical treatment facilities. We’ve also partnered with local governments in expanding the LIVES open data standard to show restaurant health scores on Yelp.

All of these things fall under Yelp’s Consumer Protection Initiative, a concerted effort to empower and protect consumers on our site. We’re constantly looking for new ways to improve our user experience, so if you have other ideas for this initiative or feedback on efforts Yelp currently has underway, including this new agreement with the federal government, please share it here.