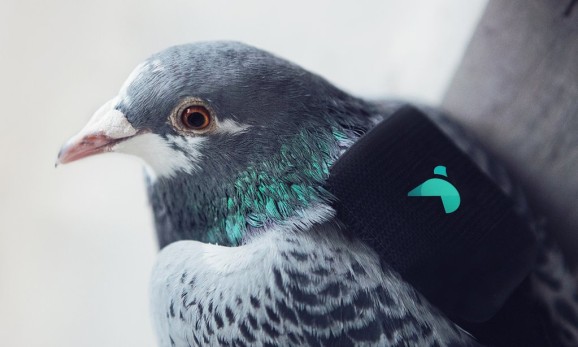 Perhaps it was only a matter of time before Twitter actually started working with real, live birds.

The company with a bird logo and that gave us the “tweet” has partnered with Plume Labs of Paris and DigitasLBi to launch a flock of Internet-connected pigeons to monitor air pollution in London.

Plume Labs is an IOT company that uses a network of sensors around the world to deliver targeted pollution reports to people’s smartphones. DigitasLBi is a global marketing and technology agency.

Yesterday was the first of three days the group plans to launch a team of 10 pigeons wearing small pollution-monitoring backpacks. The sensors were specially designed by Plume Labs and stuffed in small vests that are placed on the pigeons.

The sensors are able to monitor levels of nitrogen dioxide and ozone, the two main ingredients of urban air pollution, according to a press release from Plume.

The results of the so-called “Pigeon Air Patrol” and the results are posted directly onto the project’s Twitter account. Residents can also follow the birds on their own website that will also show their location.

And we’re off! The first #PigeonAir patrol flies from Brick Lane, monitoring air pollution as we go! pic.twitter.com/W8KnyrxnCe

The campaign is intended to draw attention to London’s air pollution issues. But the goal is also to inspire Londoners to join Plume’s new Air Patrol to become beta testers of the air pollution sensing device.

Plume is hoping to create a network of these sensors to crowdsource even more detailed readings of air pollution to compliment the data it pulls in from monitoring stations run by cities. The company has launched a small crowdfunding campaign to raise $14,000 and attract 30 recruits.

Launching last year, Plume was founded by Romain Lacombe, an influential advocate in France for the adoption of open data by governments. He’s trying to tap into the intersection of Big Data, Open Government, and Mobile to show that these things can have a meaningful impact by improving the quality of people’s lives.

“Pollution is a health issue as much as environmental issue,” said Lacombe in an interview with VentureBeat last year. “Living in Paris shortens your life by six months. Which is just crazy when you think about it. “If you have information, you can adapt your behavior and live a healthier life.”