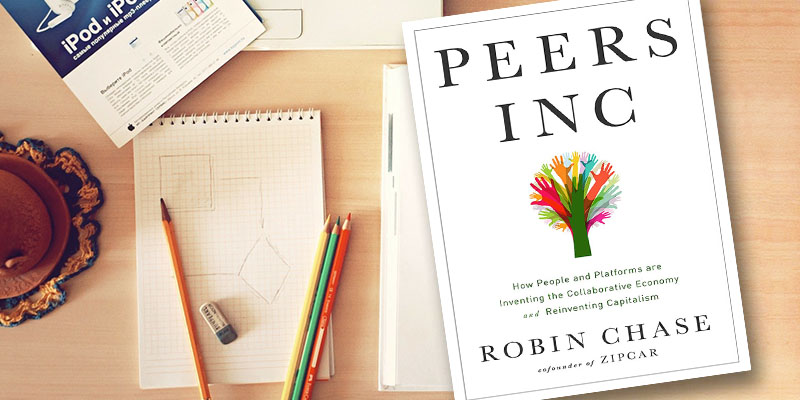 The rise of platforms and marketplaces is not just spurring a wave of startups around the world, but can also open new ways of re-organising capitalism, government and society.

The combination of ‘Inc’ (organisations like businesses or government) and peers (individuals and SMEs) via agile tech platforms has unleashed a new wave of micro-work, micro-businesses and micro-entrepreneurs, says Robin Chase, co-founder of ZipCar and the author of ‘Peers Inc: How People and Platforms Are Inventing the Collaborative Economy and Reinventing Capitalism.’

Chase was also cofounder of Veniam, BuzzCar and GoLoco, and has been named one of Time’s 100 Most Influential People in the World, a Business Week Top Ten Designer and a Fast Company Champion of Innovation.

“In a world of scarcity, Peers Inc organisations create abundance,” begins Chase. The combination of excess capacity, tech-enabled platforms and peer communities is disrupting industries ranging from transportation and hospitality to manufacturing and media.

The 290-page book is packed with examples and ideas, though the online companion could have offered more updates and trends. Here are my key takeaways and tips from the book, clustered into four categories: components, execution, implications for corporates and government, and future trends.

Though there may be variations across the world in how people may want to share their personal assets, Chase feels that this willingness is increasing, adoption of tech platforms is becoming mainstream, and a sense of responsibility to higher goals is growing.

The open source movement was an early pioneer of this wave, unleashing new ways of tapping already existing capacity like computing power, Internet connections and technical talent. App stores and sharing apps are the most visible and rapidly growing examples of Peers Inc. (See also my review of the bookZipCar’ by James Rolling.)

The advantages for participating peers can include flexibility, freedom, autonomy, safety, extra income, greater choice, better health and a sense of empowerment. Challenges may arise, however, in lack of benefits or workplace protections.

For the overall Peers Inc combination, the advantages can include faster experimentation, exponential learning and innovation, non-linear increase in value over time, smarter decisions, more effective performance, and less adverse environmental impacts. Examples include the rise of crowdfunding platforms (Kickstarter, Indiegogi) and activist tools (OpenIdeo). In sum, whole sectors of the economy, not just one company, can experiment, adapt and evolve quickly.

To enable these “miracles” to happen, four key steps need to be mastered: creation of the controlled kernel (core flexible platform and open rules of peer engagement), incentives for early peers to join, balancing of differing priorities of peers, and long term institutionalisation of community building.

The right balance needs to be found between structure and flexibility, privacy and openness. Ease of use, peer ratings, sharing of best practices, and early testimonials will help bring more committed peers. Fee levels and privileges need to fine-tuned through experimentation, eg. LendingClub moved towards favouring larger institutional lenders rather than smaller lenders; AirBnB removed large institutional members. Some such moves can be controversial, eg. Apple’s removal of reviewer AppGratis from its app store.

External factors and lots of luck can also come into play here, such as the train strikes and air traffic disruptions in Europe which boosted usage of ride-sharing platform BlaBlaCar! In other cases, disgruntled peers have formed their own lobbies as well, eg. App-Based Drivers Association. In the case of eBay, its support largely for buyers and sellers overlooked creators, who then went on to join Etsy.

As platforms grow, they may need to seek inputs from peers for future rules of growth. Sanctions of violators will need to be worked out, along with appropriate solutions for mediation, escalation and remedial action. Platforms which become too successful may end up in near-monopoly positions, and will either have to face government regulation or adopt self-regulation.

Strategies for large companies and government

While governments and the public sector have been responsible for national goods like transportation, energy and water, they need to factor in the “people sector” also and leverage emerging platforms. Aneesh Chopra, the first CTO of the US, made open-source and open-standard technology the norm for government IT. Vivek Kundra, the first CIO of the US, put into motion initiatives like Data.gov for sharing data sets with citizens and innovators. (See also my review of the book ‘Open Data’ by Joel Gurin.)

In many cities across the world, incumbents and their stakeholders have rallied against the rise of platforms like Uber. “What happens when the speed of innovation outstrips the pace of regulation?” asks Chase. In some cases, the emerging platforms have done a better job of realtime service ratings than incumbents; in other cases, there have been no clear dispute resolution mechanisms.

“Peers Inc is the atomisation of the company,” observes Chase. Policymakers and industry leaders will need to figure out who will have to bear the costs of worker health benefits, sick leave, vacation time, parenting leave, pensions and child care rights. Countries to watch include Denmark, which has developed a “flexicurity” hybrid approach of contractual safety and agility.

Some large companies have successfully embraced the collaborative economy and tapped into “edge environments.” This poses new challenges for patent regimes, but as the Centre for the Edge argues, success for firms will come not just from knowledge stocks but knowledge flows.

Successful examples include GlaxoSmithKline (opening up data and patents to combat neglected tropical diseases), Lego (opening up its Mindstorms robotics kit to developers and tinkerers), Tesla (opening up its electric battery patents), Sainsbury’s (opening up its sustainability strategy for scrutiny) and Quirky (bringing together designers and manufacturing experts for converting submitted ideas into products).

The future will be in H2H (human to human) companies, according to Veronique Laury, CEO of Castorama, a home-improvement business which has built a wiki for home improvement ideas and a marketplace for services, and also holds bar camps and online lectures.

Specialist firms such as CityMart have helped the municipal government of Stockholm figure out how to use crowdsourcing platforms to make the city more friendly for blind citizens, drawing on examples like Barcelona’s hackathons. Jeremiah Owyang, founder of Crowd Companies, has developed a migration path for corporates: product -> service -> marketplace -> platform.

The concluding section of the book offers fascinating glimpses into the future. Can Peers Inc models reduce the growing inequalities in society and reverse the concentration of wealth into the old industrial elite? What will the world be like with the rise of “benevolent dictators” such as the CEOs of companies like Google? Will new standards and formats define peer exchanges and services? Does Bitcoin represent a completely new kind of peer platform where even the core kernel is designed by peers and not lead influencers? Is there a risk that investors of peer platforms may steer them towards profits only, at a high social and environmental cost?

Peer platforms tackling climate change include 350.org (named after the 350 ppm pollution threshold). Many companies are positioning themselves as “B Corps,” where their charter includes financial, social and environmental goals, eg. Patagonia, Etsy, Change.org and The North Face.

Unilever has launched Open Innovation Challenges, co-creation centres called The Pitch, and an entrepreneur portal called Foundry. It has set new standards for responsible reduction of water usage and greenhouse emissions, along with increased usage of recycled materials. (See also my review of the book ‘Frugal Innovation’ by Navi Radjou and Jaideep Prabhu for related examples.)

While many of the examples cited in the book are from the US and Europe, peer platform initiatives are also emerging elsewhere – such as the environmental reporting and coordination by Global Forest Watch to tackle forest fires in Indonesia, Nirmal Kumar’s G-Auto rickshaw platform in India, and the design of mesh networks in Tunisia by Clibre along with the Open Technology Institute.

from YourStory.com http://ift.tt/1Es2m1O
via IFTTT