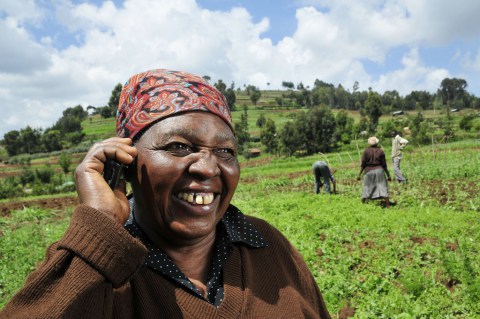 Next week will see the first continent-wide Africa Open Data Conference: bringing together governments, technologists and innovators from across the continent and beyond to explore the promise and reality of open data in Africa. GODAN will be there, hosting a series of sessions looking at where Agriculture and Nutrition data fits into this picture. In this post, based on feedback from the previous GODAN related discussions and events, we look at four key issues that those sessions will need to explore.

The GODAN initiative seeks to address long standing global problems related to food security, sustainable agriculture, and malnutrition. We believe these problems can be, at least in part, solved by better use of open data. Whilst there are promising examples, both of open data in Africa, and of open data for agriculture and nutrition, we are still in the early days of identifying and evaluating strategies to make the most of open data in delivering change.

Despite the scale of work in the open data area, there are still to few examples of impact in African agriculture, as we found in the review on smallholder impacts of open data. Making the most of open data in Africa is not just about taking approaches that have worked in Europe, America or Asia, and transporting them cookie-cutter style to other countries: different landscapes require different solutions. For example, research in Kenya and Uganda has suggested radio should be considered an important part of the open data ecosystem. In other contexts, voice-technologies and SMS have been part of making open data accessible. Policy approaches will also need to be tailored to local cases and contexts: understanding which stakeholders need to be involved in making data flow, and ensuring that it supports sustainable development.

Efforts to secure open data, and support re-use, cannot ignore issues of power and control. Fears about data being used to empower the already empowered have long been discussed in the open data world, but with the rise of the internet of things, sensor networks, and increasing volumes of data on agriculture generated at the farm level, new concerns have been raised that the open data debate might provide cover for ‘data grabs’, with powerful governments and corporates exploiting locally collected data.

It is important to explore the boundaries between data that local farmers and communities have a right to control, data that is created through the relationship between farmers and companies, where both parties have rights to the data, and non-personal data collected by governments. Openness can play a different role in each of these settings. If we are to avoid creating new data divides we need to consider not only the formal openness of a dataset, but who has the skills and resources to use it.

Farmers organisations can use existing open data to attract investments in agriculture, secure insurance and by controlling their own data improve their position with government in validating government statistics.

Open data encourages us to think about the value of datasets. That can lead to reactionary approaches that seek to lock down and privately exploit data. However, the idea of open data is that more value is unlocked when data is shared, contributed to a commons. Yet commons are not unregulated spaces: to function well they require relationships, norms of conduct and trust.

GODAN recently joined the new Global Partnership for Sustainable Development Data. The UN have suggested that if we are to be able to plan for, and monitor delivery of, the post-2015 Sustainable Development Goals, we are going to need a data revolution. New sources of data, and increased access to the data we have will be needed.

But what does this look like in the fields of agriculture and nutrition?

We need to consider best practices for collecting and sharing robust data on which plans and policy can be made. And with a focus on using ‘big data’ captured from satellites and mobile phones we need to consider responsible data practices, respecting privacy whilst ensuring policy is open to scrutiny. The role of the private sector in delivering sustainable development data is also a key topic.

Ultimately we need to make sure we understand the issues: is the issue really a data collection gap? Or are the problems down to the lack of capacity and standards for collecting and reporting data? How far is open data a solution to the data deficit that faced the last round of global development goals?

We need to promote open data to ensure all stakeholders, particularly farmers and consumers are empowered to benefit from data. And we need to do this in ways that avoid  creating new forms of dependency and exploitation.

Intermediaries play an important part in making data accessible, as does capacity building. What forms of intermediation and capacity building are best-placed to increase the use of open data in Africa? What kinds of data communities should GODAN and other open data networks be reaching out to in order to see agriculture and nutrition data used effectively to make a difference.

These are just some of the issues and questions that we hope will be on the table at the Africa Open Data Conference. Follow us via #AfricaOpenData and #GODAN.