Why Residents of Mexico City Are Organizing Themselves Against Parking Meters

Created automatically from RSS feedPosted on August 14, 2015 Posted in Journalism, Posts from feeds, Smart communities, Transparency
This post was created automatically via an RSS feed and was originally published at https://news.vice.com/article/why-residents-of-mexico-city-are-organizing-themselves-against-parking-meters

Mariela paid a meter for two hours to park on Amsterdam Avenue in Condesa, a trendy neighborhood in the middle of Mexico City. She paid with coins, and claimed to have returned shortly before her paid time was up, only to find her car had been clamped.

“I paid in time! This makes no sense!” she screamed at the two city parking workers who had just arrived. They stared blankly at her.

“You can go to an Oxxo or 7-Eleven and pay the ticket, and then we’ll come back and remove the clamp,” one of them said.

Mariela kicked the big yellow wheel clamp, and then called a taxi to drive her to one of the convenience stores.

Drivers flying into a rage upon receiving parking tickets are scenes of daily life in Mexico City. Just this July, a man was videotaped hauling a parking attendant on the hood of his car to prevent him from putting a clamp on his tire.

These dramatic and occasionally violent interactions between drivers and parking attendants have been building since 2011, when EcoParq, a program contracted by the Mexico City government, started installing meters around core neighborhoods in the city.

The meters were a direct threat to an aspect of life here that had long been considered normal — informal street attendants known as “viene-vienes” or “franeleros” who managed street parking in overcrowded Mexico City with nods to motorists and small coins.

Related: Can a President Accused of Corruption Convincingly Push an Anti-Corruption Law? Mexico Is Finding Out 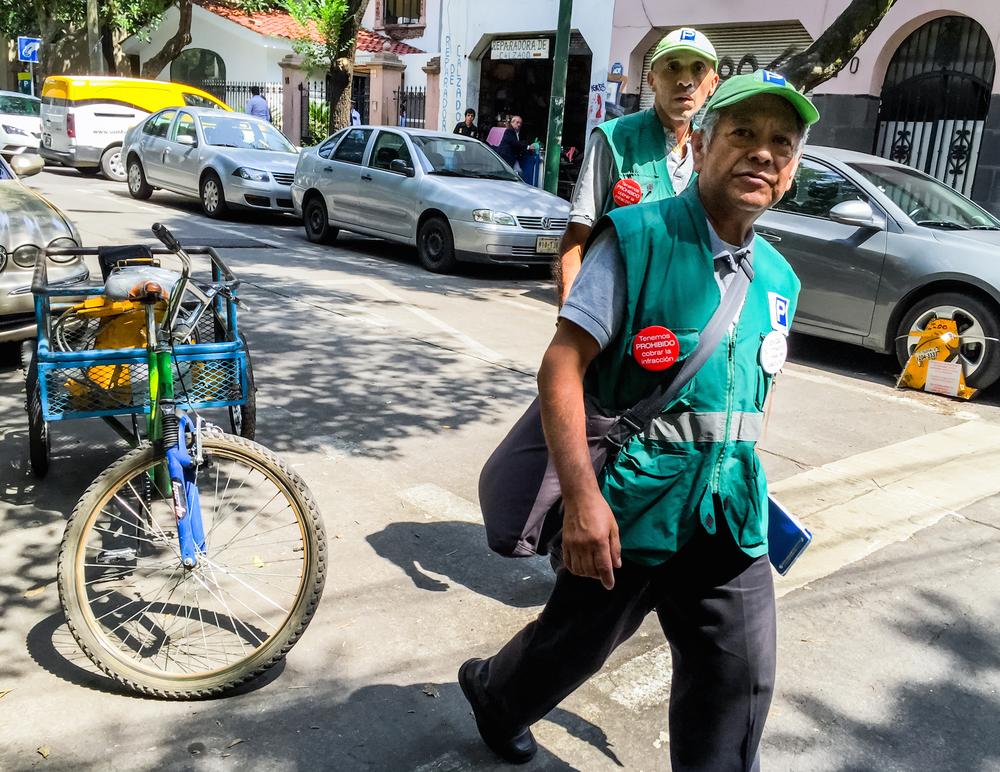 Workers with the EcoParq program are accused of placing clamps on vehicles even if motorists have paid at meters. (All photos by Phoebe Chung/VICE News)

The purpose of the meters is so “the city can begin to learn to ask for projects and solutions in an integral way,” said Dhyana Quintanar Solares, the general coordinator of Mexico City’s Public Space Authority, which manages EcoParq. “We like to think of [them] as a way for people to be able to modify their mobility habits.”

The “projects and solutions” she’s talking about are allegedly funded by the meters, and managed by committees appointed by EcoParq, although a VICE News investigation revealed almost zero accountability or transparency in how the coins collected are used.

Authorities say that 30 percent of meter revenue is reinvested in the neighborhoods where meters exist. For example, the Roma-Condesa committee decided to paint 164 new crosswalks — all featuring “a hipster walking a dog,” as Solares put it. In Roma’s Plaza Rio de Janeiro, they installed streetlights.

But these projects only aid in whitewashing the city, critics say, and aren’t remedying serious urban infrastructure problems in this metropolis of 20 million people.

More than 556 million pesos, or $34 million, have been collected by the meters, according to a July report La Jornada. Yet only 62 million pesos, or 11 percent, have been used for neighborhood improvement projects in just three areas of the city: Polanco, Lomas-Virreyes, Anzures, and Roma-Condesa, which are primarily middle and upper-middle class areas.

Between January and April 2015 alone, EcoParq collected close to 110 million pesos, or $6.7 million, from parking meters — about $2 million of which was supposedly intended for public projects.

In 2010, a man was shot and killed by a franelero in the city’s 10 de Mayo neighborhood.

EcoParq has a section of its website dedicated to revenue statistics, but there is no information on how that money is used or distributed. In fact, despite EcoParq’s claim to being a transparent program, there’s barely any information on the details and members of these committees at all.

EcoParq officials did not respond to repeated requests from VICE News for the committees’ contacts. Eventually, the agency simply replied that it didn’t have them.

In July, Mexican lawmakers voted to force EcoParq to disclose how it exactly uses the 30 percent of funds generated from the meters. EcoParq has yet to respond to these demands.

What is known is that the number of meters and issued parking tickets is growing, said Hector Puebla, an urban planner at EcoParq’s office. And as their presence increases, so do their corresponding conflicts.

Related: As Elections Approach, Mexico Is Handing Out Free Digital TVs to Millions of Voters 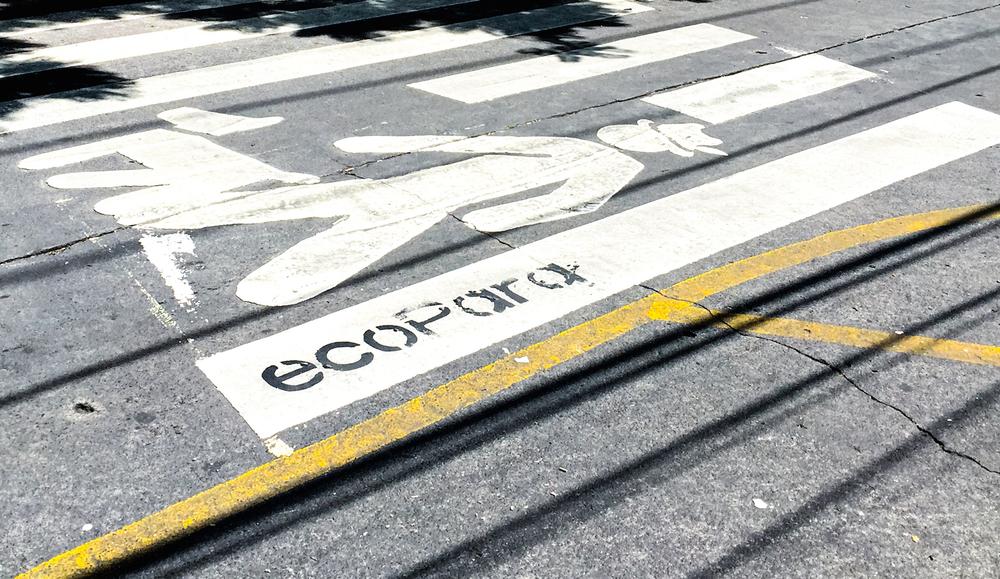 Meter revenues were used to paint crosswalks in the Roma neighborhood featuring a “hipster walking a dog.”

The parking meters are a threat to franeleros, informal valets who for the last 20 years have been parking, washing, and watching over cars in exchange for an expected donation. As meters continue to crop up, more franeleros disappear.

Jacobo Lucas is one of the few franeleros still standing in the Condesa neighborhood. He has worked the same block on Vicente Suarez since 1995. The neighbors, according to him, petitioned to keep the area parking-meter free so he could continue to work.

“The parking meters have to do with authority, and the authority never understands what society really needs,” Lucas told VICE News, as a woman nonchalantly handed him her car keys.

Jacobo Lucas’s routine sees him leave the house at 4 am in order to reach Condesa for his 6 am shift. There he works until 8 pm, three days a week, charging 20 pesos (or $1.20) per car.

‘Once you got to know a franelero, you could always count on having a parking space.’

He is a part of a group of franeleros that are putting together a publication dedicated to issues about their line of work in relation to the parking meters and police authority.

“I miss my franelero,” said Claudia Mendieta, who parks in the Narvarte neighborhood where she’s been working the last seven years.

Her franelero left when parking meters invaded the area.

“Once you got to know a franelero, you could always count on having a parking space,” she told VICE News. “Since they installed the meters, they’ve put the clamp on my car twice.”

Despite the benevolent relationships that are sometimes created between franeleros and their regular patrons, they’re also sometimes viewed as mafioso-style extortionists. Snubbing one can result in a slashed tire, a broken window, or worse.

In 2010, a man was shot and killed by a franelero in the city’s 10 de Mayo neighborhood. This past June a franelero hit a pedestrian and then escaped the police.

“It’s difficult for the parking meter program to seem like a good idea to the franeleros,” said Andres Sañudo, Coordinator of Parking Policies at the New York-based Institute of Transportation and Development Policy. “Yet, it’s the meters that are democratizing public space.”

Related: A Photojournalist Fled Veracruz Under Threat, But Murder Found Him in Mexico City 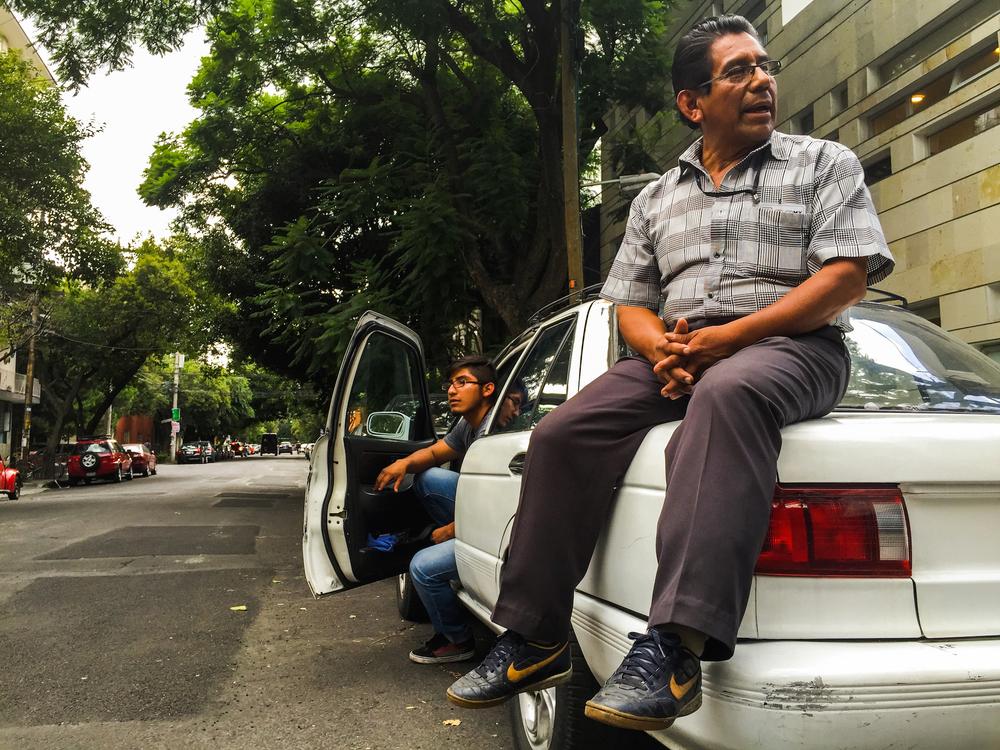 The notion that meters are “democratizing public space” is exactly what community organizations are challenging.

Coyoacan is one Mexico City borough that’s fighting the arrival of parking meters. The Universidad Autónoma Metropolitana (UAM) has even produced a documentary about their cause.

“Our struggle to deter the arrival of parking meters has been a constant issue of violence,” said Carlos Muñoz, an organizer with the group “Yo Amo Coyoacán: No Parquímetros” (I Love Coyoacan: No Parking Meters).

The group has organized several marches, a few of them ending in police brutality, Muñoz told VICE News. On one occasion, protesters were confronted with a brigade of 400 riot police. However, their efforts have continued to keep the borough free of meters.

The Napoles neighborhood has also seen regular protests against meters. According to the news site Publimetro, residents petitioned their local authorities to release data on how parking meter revenue is distributed. Benito Juarez borough chief Jorge Romero neglected to respond to their requests, and now residents are taking the issue to court. There is still no update on their progress.

In Napoles, between January and April 2015, 5,441 clamps were put on cars — that’s 45 clamps per day in an area where there are only 140 parking meters, an outrageous number considering it implies that 33 percent of parked cars were clamped at any given time.

According to a report on national chain Televisa, in 2013, a clamp was installed every five minutes, and in 2014, that figure rose to every four minutes. VICE News spoke with many Mexico City motorists who had tickets that said they paid in time to avoid being clamped — but got clamped anyway.

Despite the fact that roving meter attendants are now a part of the landscape in certain Mexico City neighborhoods, drivers are sometimes forced to wait for hours until an attendant comes to release a clamp. They must also pay the ticket before they’re even allowed to contest it.

To date, there are now 1580 meters throughout the city, and as that number continues to grow, so will distribution of fines. A parking ticket is 498 pesos ($30), and yet there is no explicit proof as to where that money goes. A franelero typically charges between 20 and 50 pesos a day, depending on the neighborhood and time.

“We have a right to be here,” Lucas said.

Yet, how much longer will he want to stay — or will the city let him?