Whitehall Monitor 2015: the Coalition in 163 charts 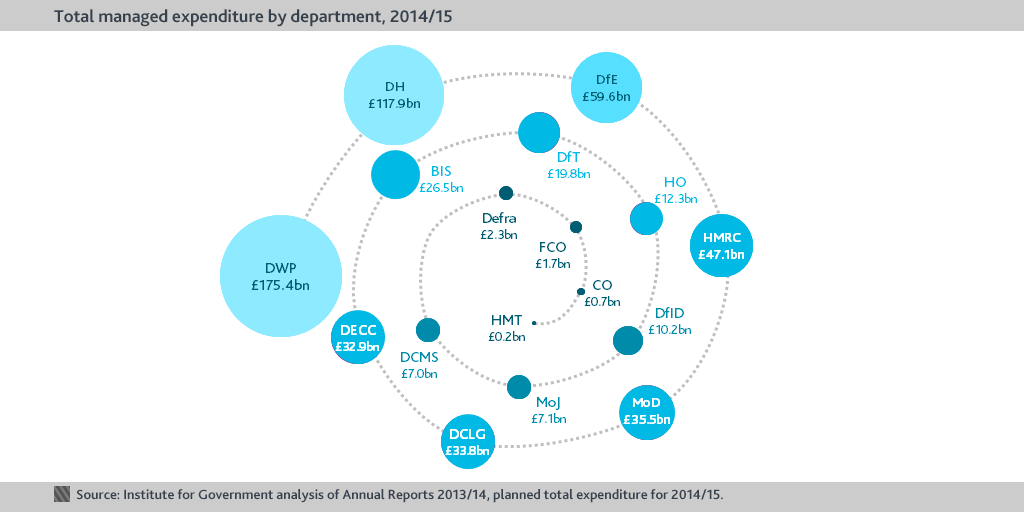 The Whitehall Monitor is the Institute for Government’s data journalism project. Today, just a week before the final Spending Review settlements are revealed, we launched our third annual report, ‘The Coalition in 163 charts’. Gavin Freeguard highlighted some of these charts to tell four stories about what has happened over the last five years, and where that leaves departments as they face a very tough spending review. Over the course of the Parliament government revenue went up, but so too did government spending. Overall however, the gap between spending and receipts (the deficit) narrowed, and it now stands at £90bn. Departments differ a lot in how much money they spend. Together, DWP and DH accounted for 50% of government spending in 2014/14. They dwarfed the Treasury – the sun around which all government spending revolves, which has a budget of (only) £200 million. Different departments spend their money in different ways: allocating funds directly to programmes; channelling funding through arm’s-length bodies (ALBs) and other organisations, or through grants (e.g. to local authorities); or allocating resources using a markets model, where the department commissions other organisations to carry out work on its behalf. This has implications for the control departments have […]