↓ Skip to Main Content
Home › Benefits of open data › Which are the largest cities in Britain? 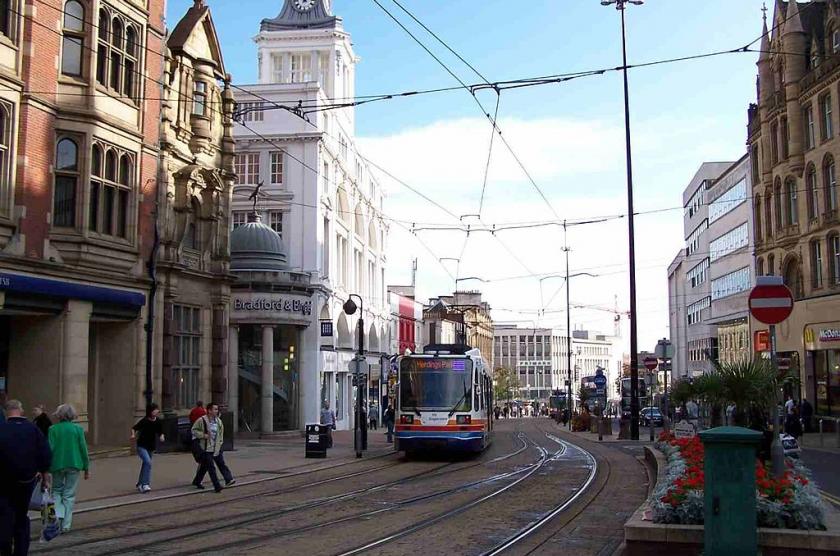 Which are the largest cities in Britain? 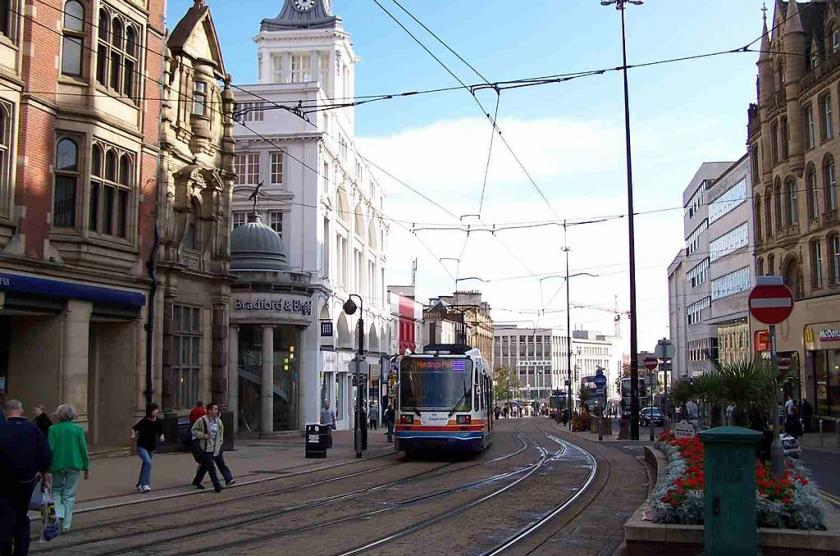 The other day, over on that Twitter, I was invited (no, really, I was) to help settle an argument: how big is Sheffield?

A property listing, for the old town hall, had suggested it had once been the nerve centre of the UK’s third largest metropolis. No one seemed quite convinced by this, for the very good reason that everyone involved could think of three bigger cities without breaking a sweat.

So, I’m going to go out on a limb here and say that, no, Sheffield is not Britain’s third biggest city.

But we like to do things round the book round here – so let’s crunch the numbers and establish, once and for all, a definitive ranking.

There’s one slight problem with this ambition: cities are surprisingly hard to define. And if CityMetric had a motto, it’d be whatever the Latin* is for “It depends how you count”.

The reason Sheffield had somehow sneaked its way into third place, despite manifestly not being the country’s third largest city, is because it’s the third largest individual local authority, with a population of around 553,000. Only Leeds (751,000) and Birmingham (1.1m) are bigger.

But already, you can see a problem with this definition: there isn’t a London-wide local authority that’s directly comparable to these places. Greater London is more sensibly compared to the other old metropolitan counties (West Midlands, West Yorkshire, etc). But while Greater Manchester is a pretty coherent entity these days, several of the others are still arguing about whether they’re one city or several.

Nonetheless, in the name of completism, here are the populations of England’s metropolitan counties…

…and of some of the bigger official “cities” they contain:

Right. Now that’s out the way, we can get onto the stuff that’s actually useful.

There are a number of other ways of defining city populations, of which perhaps the most obvious is the “urban area” – that is, the continuously built up zone. This, after all, is the thing that feels like a city when you are actually inside it – or, come to that, when you are flying over it in a plane.

The most up-to-date stats on this measure come from Demographia, a St. Louis-based consultancy, which every year gathers data on every city with a population of 500,000 or more and ranks it in its World Urban Areas Report.

In this year’s edition 13 British cities make that list. Here they are, in chart form: 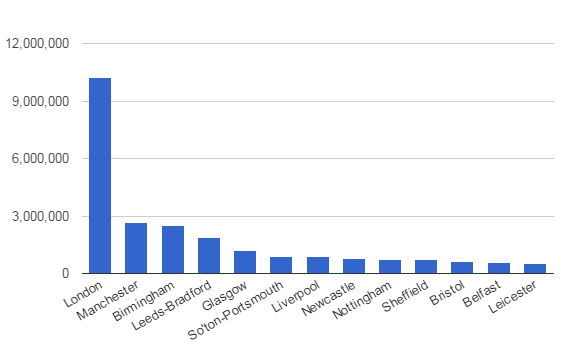 The dominance of London, though, renders the chart almost unreadable – we really only included it to give you some sense of the numbers we’re talking about here – so from here on in we’ll just present the figures.

So, now you know Leicester residents: you’re the 942nd largest city in the world.

A number of comments about this data. Firstly, on this definition, Britain’s historic second city Birmingham has been shoved into third place. Poor Birmingham.

Secondly, the only one of the four UK countries without a city of this size is Wales: Cardiff, with 467,000 residents, just misses ranking.

Perhaps the most unexpected entry here is in sixth place. No one would think of either Southampton or Portsmouth as a major city: considered as a single entity, though, which in terms of sprawl they are, they’re bigger than relative giants such as Liverpool or Newcastle.

Oh, and Sheffield barely makes the top 10, so is definitely not the third largest city in Britain. Just to be clear.

But there are other ways of visualising cities. For example:

PUAs are, essentially, collections of local authorities that function a bit like single cities. They were created by the Department for Communities & Local Government a decade or so back, as a statistical tool to help it draw comparisons between very different places. The aim was to come up with a list of areas less arbitrary than existing council boundaries; but which still allowed you to count largely independent but touching cities (Southampton and Portsmouth, say) as independent entities.

Our old friends at the Centre for Cities still use PUAs in their own research, and have conveniently published a map of how they looked in 2014. Here it is: 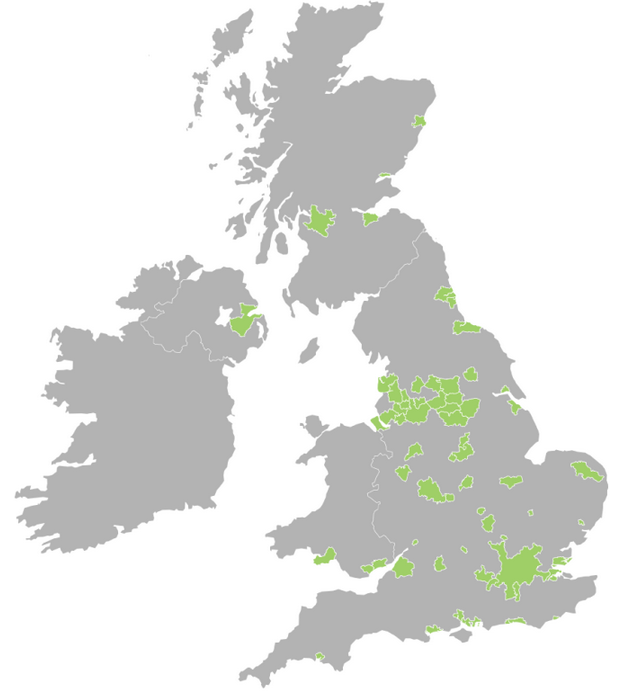 On these definitions, Leeds and Bradford are counted separately; Sunderland isn’t part of Newcastle, and Bolton, Rochdale and Wigan are not included in Manchester. These things obviously have a knock-on effect on the final figures for how big city populations are.

Those caveats behind us, here’s the top 10:

Manchester is rather shrunken; Birmingham is back in second place. Leeds, deprived of Bradford, has fallen a long way down the league tables. And Southampton and Portsmouth, two cities once again, are nowhere to be seen.

Let’s look at one last definition:

Metropolitan areas are, in the most literal sense, the big ones – not simply a city itself, but its suburbs, commuter towns and rural hinterland. On this definition, London isn’t Greater London – it’s a large chunk of the Home Counties, too.

The figures below are from a document published in 2007, and are based on data taken from 2001, so the numbers are pretty out of data (hence the inconsistencies with the other lists above). But it’s the best we’ve got so here, courtesy of the EU’s ESPON project, are the top 10.

Considered as a metro, rather than a city, Birmingham is way ahead of Manchester – a result of its better transport links to surrounding towns, perhaps. The twin cities of South Hampshire are back in the rankings, and several other cities look a lot bigger when the whole of their economic footprint is taken into account.

Glasgow, however, doesn’t: it barely makes the top 10. Compared to cities like Birmingham or Leeds, it doesn’t have much of a hinteland.

What we can do, though, is come up with a sort of typology: not a numbered ranking, exactly, but a sort of way of visualising which league cities are playing in.

The latter category is incomplete: other cities, like Cardiff, Edinburgh, Middlesbrough, even Brighton or Bournemouth, probably have a claim to be in there, too. Britain only has one city whose population even gets close to 10m, but a couple of handfuls of them are bobbing around the 500,000 mark.

But the point, in the end, is clear. No way in hell is Sheffield Britain’s third city.