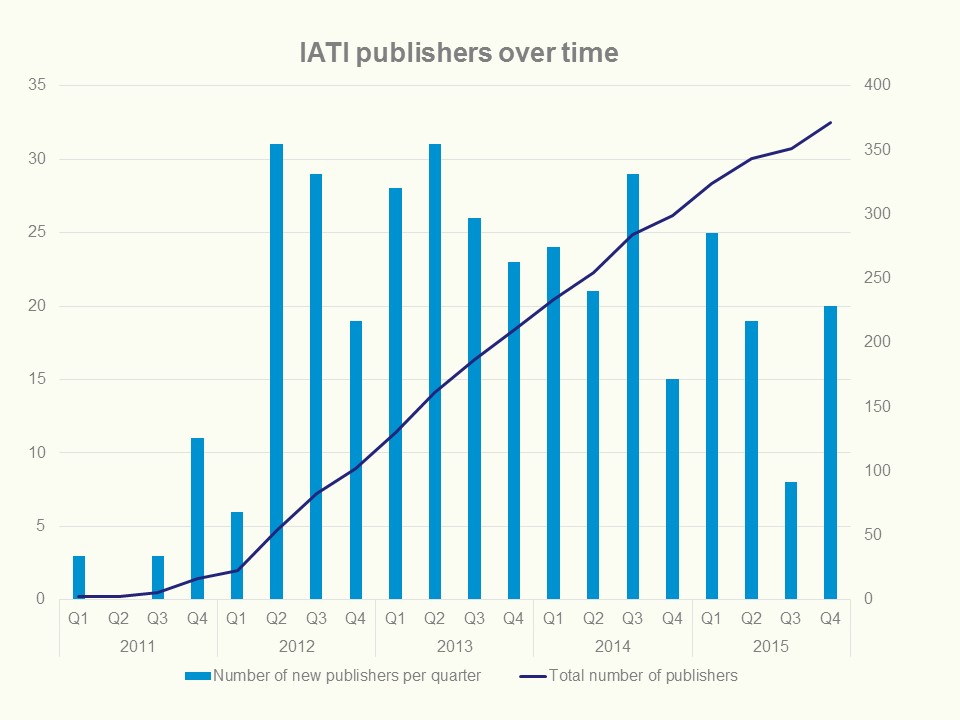 2015 has been another busy year for IATI. We’ve increased the number of IATI publishers, worked towards improving data quality and usage, and engaged in the post-2015 development agenda.

Here are our key achievements:

The number and variety of IATI publishers have grown

In 2015 72 new organisations published data to the IATI Standard for the first time. These include the European Bank for Reconstruction and Development (EBRD), the Romanian Ministry of Foreign Affairs and the United Nations Educational, Scientific and Cultural Organization (UNESCO). This brings the total number of publishers to 371 across 40 countries.

There has been some progress in improving IATI data quality

IATI’s Annual Report 2015 considered the quality of data being published against the three Busan dimensions (timely, comprehensive and forward-looking), and concluded that there have been great strides forward in the publication of timely data:

41% (US$32bn) is from publishers updating their data at least monthly.

We will continue to drive up data quality next year, through working with publishers and monitoring performance through the IATI Dashboard.

Our independent evaluation said that a priority for IATI must be to increase the use of data, especially at country level and we’ve seen real signs of progress.

Working closely with the Government of Myanmar and the European Union, Catalpa launched Mohinga, Myanmar’s first Aid Information Management System (AIMS). Mohinga is built upon Catalpa’s Openly platform and is the first AIMS to be based on the IATI Standard (making it ‘IATI native’). This means that the way in which data is stored directly corresponds with the requirements of IATI, a global first for an AIMS and one that is helping bridge the gap between local and international aid data.

In March, the Government of Ghana, in its role as a member of the IATI Secretariat, hosted a regional workshop on data use in Accra, with 18 African countries participating. This event provided excellent learning for IATI on some of the challenges that are faced in using IATI data at country level.

Our political outreach has gone from strength to strength

At FFD3 in July, IATI co-organised a well-attended side-event on the role of data standards in monitoring FFD commitments and we were name-checked in the Addis Ababa Action Agenda. IATI also became a member of the Joined-up Data Alliance and co-organised an event on joined-up data standards at the Open Government Partnership Summit in Mexico City.

The IATI Standard has continued to evolve

Our community has flourished

Seven new organisations joined the IATI Steering Committee as members, including the Governments of Nigeria, Burundi and Benin, bringing the total number of members to 70 organisations.

For the first time both our TAG (Technical Advisory Group) community and the IATI membership came together for a joint meeting in Ottawa in June to collaboratively take IATI forward, both on the technical and political level. This month, we were delighted that IATI’s Steering Committee meeting had record attendance of 90 participants from 30 different countries representing 54 governments and organisations. Some key decisions were taken about IATI’s future vision and strategy which bode well for an exciting and busy 2016!