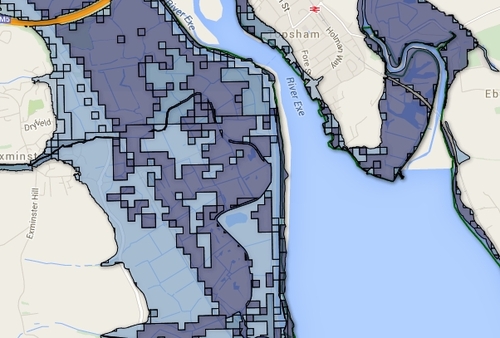 Created automatically from RSS feedPosted on November 13, 2015 Posted in Benefits of open data, Informing Decision-making, Posts from feeds, Public safety, Resilience
This post was created automatically via an RSS feed and was originally published at http://mapgubbins.tumblr.com/post/133121991510

Last week the Association of British Insurers (ABI) called on property search websites to include flood risk information in the material they present about properties for sale. Suitable open data for England is available from the Environment Agency, so why aren’t Rightmove and Zoopla using it?

There’s some merit to this idea. Property websites provide house hunters with all sorts of useful location-based information so why not help them factor flood risk into their decisions as well?

Renters might also benefit from ABI’s proposal for “traffic-light flood risk info”. Investigation of flood risk is a standard step in the conveyancing process, but renters are left to their own devices – and properties that won’t sell because of high flood risk often end up in the private rental market.

But I don’t expect property websites to jump at this. Their priority is to put buyers in touch with sellers (or tenants in touch with letting agents). They may provide local information as context but mainly they want to present every property in the best light.

Is this actually the information house buyers need, anyway? Flood damage can be disruptive, even traumatic, but for UK homeowners flooding is mainly a financial risk.

What house buyers really want to know is not so much the level of flood risk but how much it will add to their household insurance premiums. And that’s something they often won’t discover until they have committed to their new property.

Last month Tom Elliott MP asked the Environment Secretary if she would take steps to recommend that insurance companies make public their geographical data suppliers in respect of areas deemed to be at risk of flooding. Floods Minister Rory Stewart gave this response:

Insurance companies determine the flood risk element of the premiums they charge. Insurers use a variety of models to identify flood risk which may differ by area and organisation and will depend on their approach to risk and their underwriting strategies. Insurance companies do not have to disclose the criteria they use. The criteria and data suppliers that insurers use is commercially sensitive information which, if made public, could serve to distort the effective operation of the market.

I have a background in developing underwriting tools for the insurance industry, and normally I’d be sympathetic to that view. Managing accumulated exposure to flood events is tricky. The UK is one of the few states that still has a well-developed private market for flood insurance, but household business is competitive and has low margins.

Except … we don’t exactly have a private market for flood insurance anymore. This week the regulations for Flood Re took effect.

Flood Re is a government-backed pooled insurance scheme intended to make affordable flood insurance available to households at highest risk of flooding. The scheme has a target launch date of April 2016.

Insurers will be able to pass the flood element of eligible home insurance policies to Flood Re at a premium that will be capped based on Council Tax band.

The cap on premiums will be funded by a levy of about £10.50 per year on all home insurance policyholders, which means insurance for homes in high-risk areas will effectively be subsidised through taxation.

Flood Re is run by the insurance industry, but as Flood Re itself says:

The Office for National Statistics (ONS) will classify at least part of Flood Re’s income as public money, or will classify Flood Re as a public body. This adds a further unique dimension to Flood Re: it will be an industry-run, industry-led and industry-owned company, but with direct accountability to Parliament for its achievement of the policy objectives set out in legislation, and for its custodianship of public money.

Which as far as I’m concerned means the public should expect more transparency from Flood Re than we might from an ordinary insurance company.

The core problem is this: homeowners will have no real understanding of how Flood Re assesses flood risk at the individual property level. That data is closed.

Most of the technical documents about this

have been removed from Flood Re’s website; but I’ve cached an earlier set.

Publicly-funded flood data is becoming more open, yet insurers are introducing a national flood insurance scheme based on property-level assessments of flood risk that will not be at all transparent to policyholders.

On the one hand Government is applying the open data agenda to reduce information asymmetries in the market, and on the other hand Flood Re is reintroducing those asymmetries.

Building an evidence base

Flood Re and the insurance industry have no obvious motive to be transparent about how they assess flood risk. But Government could make Flood Re open up the Property Data Hub, or at least produce detailed location-based statistics on the costs of flood insurance once Flood Re is in operation, by exercising its FWMA power to request information.

Why should Government do that? Because in some quarters Flood Re is an unproven proposition. The Committee on Climate Change has been highly sceptical. And according to Defra civil servants, “the quantifiable economic costs included in the technical impact assessment of Flood Re continue to be greater than its estimated benefits”. It took a ministerial direction to keep Flood Re on track.

What Government needs now is an evidence base to demonstrate that Flood Re and the wider insurance industry are actually tackling the problem of unaffordable household insurance in areas of high flood risk. The best way to build that evidence base is transparently – by compelling insurers to release small-area statistics on the average cost of flood insurance, as open data that we can then analyse against other economic and social indicators.

The map image above includes Environment Agency flood risk data that is subject to the following attribution: “© Environment Agency copyright and/or database right 2014. All rights reserved © Crown copyright and database rights 2014 Ordnance Survey 100024198 Some features of this map are based on digital spatial data licensed from the Centre for Ecology & Hydrology, © NERC”. No idea about the bear. It’s very sad though.