Timeline: The government’s review on Freedom of Information Act

On a quiet, sunny, Friday afternoon in July the Conservative government announced that it would review the Freedom of Information Act.

A panel – The Freedom of Information Commission (with FOI Commissioners) – was formed to look at the scope of the Act and recommend changes.

The group of five will report on what they find about the FOI Act by November. This page will keep a running list of the developments that take place from the announcement to the findings and the fall-out from them.

July 20: Tim Berners Lee’s World Wide Web Foundation has also spoken out about the proposed review of the FOI Act. It said that there should be a transparency specialist on the panel and went on to say:

Open data initiatives rely on proactive disclosure, but it is vital that open data is reinforced by strong freedom of information mechanisms to ensure citizens can access what government agencies may not wish to disclose. We urge the Government to uphold its Freedom of Information Act, and appoint a panel member with expertise in government transparency to ensure all points of view are considered.

July 20: MySociety, the charity behind the open FOI making platform WhatDoTheyKnow, has said:

“But for FOI to really work it has to be applied across all departments, in all public bodies, with as few loopholes or exceptions as possible. If Government itself is shown to be sidestepping its responsibilities in transparency, then what is to stop other authorities from taking their cue from them? As we learned at our recent Alaveteli conference, during which we heard from practitioners running FOI sites in many countries, when bodies stop responding to requests, public accountability suffers.”

July 20: Amid growing concern about the impartiality of the FOI Commission Labour MP Wayne David told the House of Commons that it isn’t cross-party as Jack Straw doesn’t represent them.

July 20: The Green Party has said that any changes to FOI shouldn’t be changed, their Justice Spokesperson, Charley Pattison said: “Transparent and accountable decision-making is essential to a successful democracy. Freedom of Information requests have often been the strongest weapon used against corruption in government. The FoI Act already contains adequate protections for sensitive information; any further restrictions will most likely be to protect politicians rather than the public.”

July 20: Campaigning website 38 Degrees launched a petition to help protect the FOI Act. It said politicians are desperate to “water-down our right to hold them to account”.

July 19: Former Conservative MP Douglas Carswel, who defected to UKIP in the run up to the 2015 general election, criticised his former partying in the Mail on Sunday saying:

Over the past decade, digital technology has made it far cheaper and easier to disclose information. Claiming that the costs and bother of answering FoI requests are reasons not to is nonsense. Instead of rowing back from greater disclosure, a truly modernising administration should be looking to build on the Act by making disclosure the norm. Data should be made available without members of the public having to ask for it.

July 18: The Campaign for Freedom of Information attacked the review panel saying those on it had “made their careers by toadying up to the establishment”. Jack Straw, a member of the panel – and FOI skeptic – said that the review panel was openminded.

July 17: Trinity Mirror journalist David Higgerson says that the review is an “all out assault on the public’s right to know” as criticism of the review begins to grow. BuzzFeed reports that a number of MPs are already becoming outspoken about the changes and saying that FOI should be extended, rather than curtailed. Labour deputy leader candidate, at the time, Tom Watson told Buzzfeed:

In announcing the commission, the government are really saying they’re going to water down the act. This is the wrong direction.

I want greater statutory obligations on public bodies to reveal information in a more timely fashion … and I also want to extend the remit of the act to any private sector company providing a public service.

July 17: The Guardian report that the review of the FOI Act “may curb” access to government papers. It then goes on to publish the following cartoon based on an FOI disclosure that day about the UK bombing ISIS in Syria, despite the government saying this wouldn’t happen. 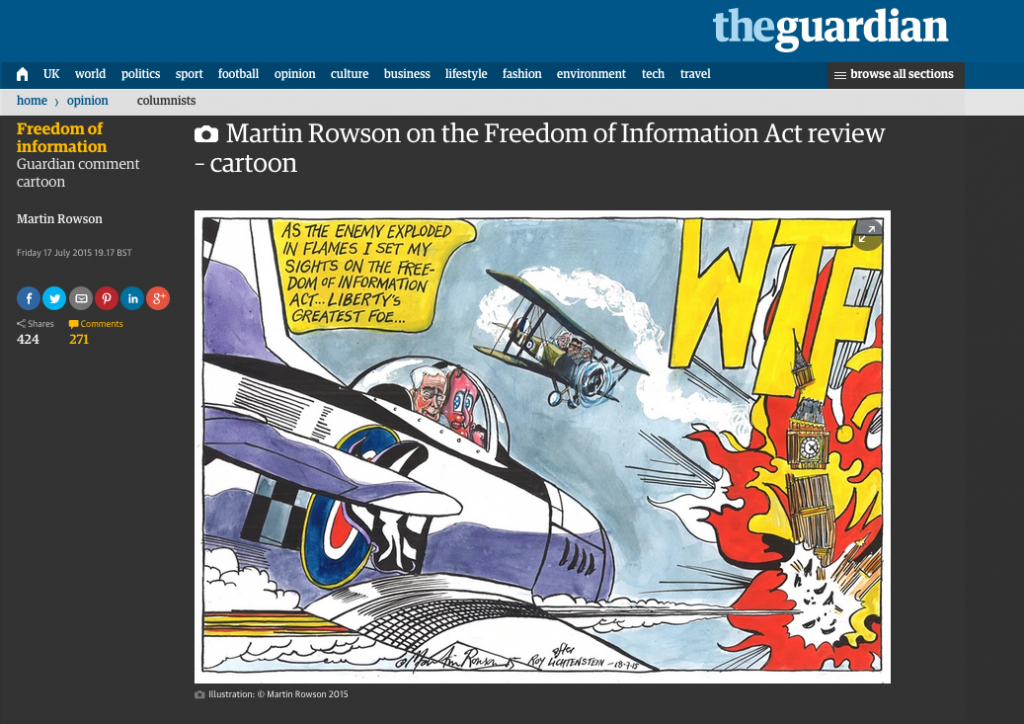 July 17: The government announce that a Independent Commission on Freedom of Information would be formed to look at the FOI Act. The group of five were drawn from a ‘cross-party’ group and will look at the public interest in disclosures, whether it is too easy to disclose information around advice given to ministers and government policy, and the cost of the Act. They will report by November.