Those “eight million foreigners” living in the UK

Created automatically from RSS feedPosted on August 26, 2015 Posted in Benefits of open data, Data Journalism, Informing Decision-making, Journalism, Posts from feeds, Transparency
This post was created automatically via an RSS feed and was originally published at https://fullfact.org/factcheck/immigration/eight_million_foreigners_uk-47537

Tomorrow’s release of statistics on migration is front page news today, but the Telegraph’s splash oversimplifies a little. The Office for National Statistics (ONS) is expected to announce on 27 August that the number of foreign-born people in the UK has hit eight million, but that’s not the same as the number of foreign nationals. 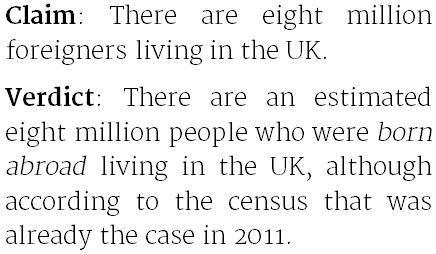 The “eight million foreigners” figure comes from a briefing released by the Migration Observatory at the University of Oxford (one of Full Fact’s expert partners during this year’s general election campaign). It’s a prediction of what the official ONS figures for 2014, out tomorrow, will show.

As the Migration Observatory told us, predicting the eight million figure is just a matter of putting two and two together.

…for a given definition of “foreigner”

The 8 million aren’t all foreign citizens, even if they were born overseas. Just ask the Mayor of London, born in New York. The number of overseas nationals was around 5 million last year.

The irony is that the source of these headlines, the Migration Observatory, doesn’t think that these landmarks are particularly significant in the first place. It says that:

“while the UK’s foreign-born population is expected to exceed 8 million for the first time in the published ONS data, the official statistics take some time to produce, which means that this threshold is actually likely to have been crossed more than a year ago.

In other words, ‘landmark’ moments at which statistical measures reach a certain point are often somewhat arbitrary.”

Migration Watch, a think-tank, makes a similar point about the extent to which this is “news”, saying that the last census recorded the foreign-born population at 7.95 million, as far back as 2011. That’s correct: the foreign-born population of England and Wales was 7.5 million according to the census, in Scotland another 370,000, and Northern Ireland 80,000 (excluding people born in the Republic of Ireland).

The census and the ONS figures are different because the data is collected differently. As is well-known, the census tries to literally count everyone, whereas other population estimates are based on a survey. It excludes most foreign students living in halls, for example.

The post Those “eight million foreigners” living in the UK appeared first on Full Fact.