↓ Skip to Main Content
Home › Benefits of open data › The Global Open Data Index 2015 is live – what is you country status?

The Global Open Data Index 2015 is live – what is you country status? 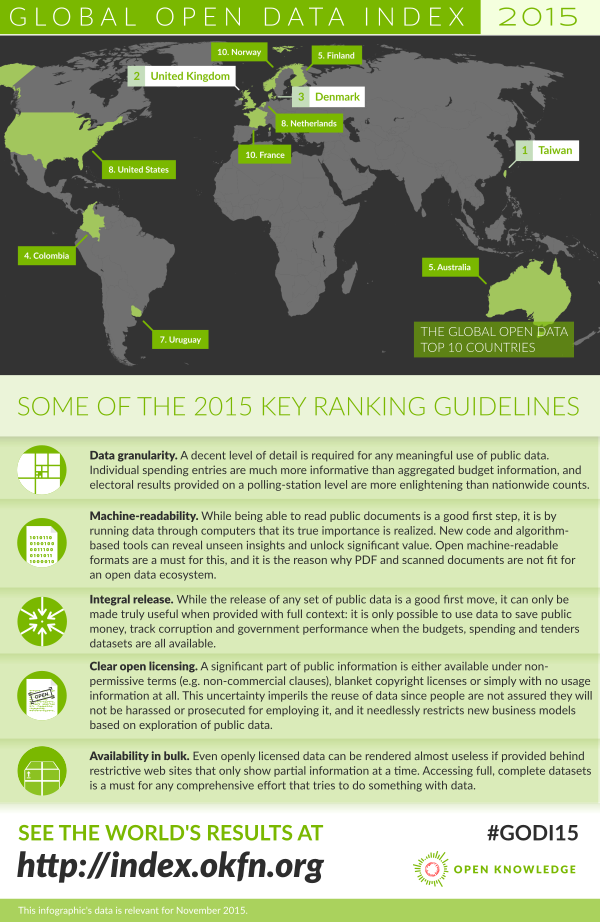 We are excited to announce that we have published the third annual Global Open Data Index. This year’s Index showed impressive gains from non-OECD countries with Taiwan topping the Index and Colombia and Uruguay breaking into the top ten at four and seven respectively. Overall, the Index evaluated 122 places and 1586 datasets and determined that only 9%, or 156 datasets, were both technically and legally open.

The Index ranks countries based on the availability and accessibility of data in thirteen key categories, including government spending, election results, procurement, and pollution levels. Over the summer, we held a public consultation, which saw contributions from individuals within the open data community as well as from key civil society organisations across an array of sectors. As a result of this consultation, we expanded the 2015 Index to include public procurement data, water quality data, land ownership data and weather data; we also decided to removed transport timetables due to the difficulties faced when comparing transport system data globally.

Open Knowledge International began to systematically track the release of open data by national governments in 2013 with the objective of measuring if governments were releasing the key datasets of high social and democratic value as open data. That enables us to better understand the current state of play and in turn work with civil society actors to address the gaps in data release. Over the course of the last three years, the Global Open Data Index has become more than just a benchmark – we noticed that governments began to use the Index as a reference to inform their open data priorities and civil society actors began to use the Index advocacy tool to encourage governments to improve their performance in releasing key datasets.

Furthermore, indices such as the Global Open Data Index are not without their challenges. The Index measures the technical and legal openness of datasets deemed to be of critical democratic and social value – it does not measure the openness of a given government. It should be clear that the release of a few key datasets is not a sufficient measure of the openness of a government. The blurring of lines between open data and open government is nothing new and has been hotly debated by civil society groups and transparency organisations since the sharp rise in popularity of open data policies over the last decade. While the goal of the Index has never been to measure the openness of governments, we have been working in collaborations with others to make the index more than just a benchmark of data release. This year, by collaborating with topical experts across an array of sectors, we were able to improve our dataset category definitions to ensure that we are measuring data that civil society groups require rather than simply the data that governments happen to be collecting.

Next year we will be doubling down on this effort to work in collaboration with topical experts to go beyond a “baseline” of reference datasets which are widely held to be important, to tracking the release of datasets deemed critical by the civil society groups working in a given field. This effort is both experimental and ambitious. Measuring open data is not trivial and we are keenly aware of the balance that needs to be struck between international comparability and local context and we will continue to work to get this balance right. Join us on the Index forum to join these future discussions.