Saving lives with Defibrillators in Trafford 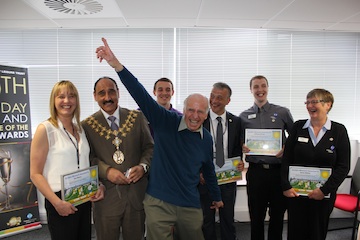 According to the British Heart Foundation:

a cardiac arrest happens when your heart stops pumping blood around your body.

If someone has suddenly collapsed, is not breathing normally and is unresponsive, they are in cardiac arrest.

The most common cause of a cardiac arrest is a life-threatening abnormal heart rhythm called ventricular fibrillation (VF), which is what happens when the electrical activity of your heart becomes so chaotic that the heart stops pumping and quivers or ‘fibrillates‘ instead.

Can you recover from a cardiac arrest?

The answer is basically a “Yes”, but there’s a big “if”. As the British Heart Foundation explains (I’ve just added emphasis):

It is possible to survive and recover from a cardiac arrest, if you get the right treatment quickly.

VF can sometimes be corrected by giving an electric shock through the chest wall, by using a device called a defibrillator.

This can be done in the ambulance, or at hospital, or it can be done by a member of the public at the scene of a cardiac arrest if there is a community defibrillator nearby.

There’s lots of evidence that defibrillators can save lives if they are used in the first few minutes following cardiac arrest.

Trafford has been particularly successful in getting defibrillators “out there”. Much of this is thanks to the former Mayor of Trafford, Cllr Dylan Butt, who decided to focus his charitable work on buying defibrillators and positioning them around Trafford. This is his campaign leaflet:

The story is best told by Jamie Whyte who heads up the Trafford Innovation and Intelligence Lab, but I’ll summarise the gist, and you can read Jamie’s own post about it: CLEAR! (DEFIBRILLATORS IN TRAFFORD).

Jamie’s team brought together a variety of data including, as Jamie says:

They also crowdsourced the locations of existing units (and found around 30), and mapped them to show where they were / any gaps (and also when they were available).

They then approached North West Ambulance Service,  who provided them with data on the number of ‘Red 1′ calls (immediate threat to life) that they had received over the previous year, by postcode sector (eg M33 4).

Knowing the position of existing units AND the number and nature of callouts enabled the Mayor’s charity committee to target their fundraising, and approach individual businesses near to each of the proposed sites.

At the last count, largely thanks to the campaign, Trafford had 72 defibrillators, several of which have been used ‘for real’ to save lives – this article in Trafford Leisure is a great testament: ‘Stayin Alive’ – Gordon ‘Trusts’ His life with Trafford Leisure.