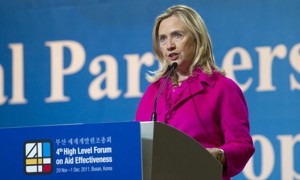 The 31st of December 2015 marks the deadline that donors set themselves to make their aid fully transparent. The Road to 2015 campaign was launched over a year ago to push donors to meet their commitment and we are now entering the home straight.

But we are not taking our foot off the pedal. To coincide with the upcoming deadline we announced last week that we have started collecting data for the 2016 Aid Transparency Index. This means we’ll be monitoring the quality of donors’ open data publication over the next three months. In early January we will have a dataset that tells us exactly who out of 46 of the largest and most influential donors have made it across the finish line, and which have not.

We hope that this will provide some additional impetus to donors to get more data out there ahead of the deadline. With so much happening during 2015, in the shape of the Financing for Development summit last July and finalisation of the SDGs in September, we believe it is crucial not to let donors off the hook for the commitments they have already made. If we are to take new commitments seriously then existing ones must first be met. Moreover, it is widely acknowledged that more and better data is needed to support the 2030 sustainable development agenda. Publication of open aid data to IATI is only one part of the puzzle, but an extremely important one. Last week the Global Partnership for Sustainable Development Data was launched in New York. We have joined the partnership, releasing a statement that includes our commitment to it. But we also included a condition that as donors make new promises, they should not be allowed to forget the promises they have already made. 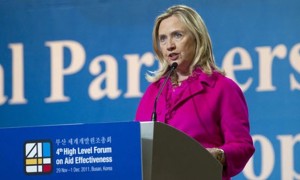 Former U.S. Secretary of State Hillary Clinton announces the U.S. will join IATI at Busan in 2011

Our message is simple: There is still time to act. In the past we have seen dramatic increases in the amount of information published during the time we collect the data for our Index ranking. Our last review showed that in Europe, major donors such as France and Germany had significant improvements to make. Others were still stuck in the pits. Italy, for example, has to date published no information to the agreed open standard (although they have joined the Global Data Partnership). In the U.S., spending by the State Department and Department of Defense is still not transparent, despite their commitment to make it so back in 2011. But the review also showed that improvement is possible in a short space on time. USAID, for instance, jumped 20% in terms of their data quality assessment in 2015. They achieved our ‘good’ category for the first time and put themselves on-track to meet the deadline.

So stay tuned to see which donors have made it, and which are still stuck in the garage.