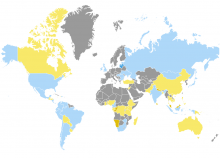 Created automatically from RSS feedPosted on August 4, 2015 Posted in Benefits of open data, Informing Decision-making, Posts from feeds, Transparency
This post was created automatically via an RSS feed and was originally published at http://www.opengovpartnership.org/blog/mark-robinson/2015/08/04/open-data-transparency-and-environmental-democracy-index

The Environmental Democracy Index (EDI) was launched by the World Resources Institute in May 2015. Produced by WRI’s Access Initiative, EDI is the first publicly available, online platform that can help strengthen country commitments to environmental governance and transparency under the Open Government Partnership. It analyzes legal indicators for 70 countries to measure progress under the UNEP Bali Guidelines on access to information, public participation and access to justice (www.environmentaldemocracyindex.org), three procedural rights known collectively as “environmental democracy.”

The EDI places data on 75 legal indicators and 24 practice indicators in the public domain, and provides rankings and comparisons of country performance on ensuring environmental democracy for citizens. This data enables governments to assess and compare their standing, and to stimulate efforts to strengthen environmental legislation. EDI is also a resource for the media and civil society organizations, who can use the data to monitor government commitments and implementation of legal provisions. It will be complemented by the Aarhus Convention Index, which WRI is developing for signatories to the Aarhus Convention as a means of monitoring compliance and progress on environmental democracy rights.[1]

Placing large amounts of environmental data in the public domain is intended to stimulate efforts to promote global solutions and public action to address environmental challenges. In October 2016, Manish Bapna, WRI’s managing director, will become the lead civil society co-chair of the Open Government Partnership (OGP), along with the Government of France. WRI and the French government are committed to increasing the number of OGP national action plan commitments on open government and environmental policy, and to giving a greater role to subnational governments in the OGP.

In providing accessible data on 75 legal indicators in the public domain, the EDI offers an important source of data to inform country action plan commitments in the environmental realm, which currently account for just 6 percent of the 2,000 commitments made to date, mainly on extractives and on environmental governance. The EDI data also provides a reference point for media and civil society oversight in monitoring these commitments, and can strengthen government capacity for implementation and enforcement of environmental laws in conformity with international conventions such as the UNEP Bali Guidelines and the Aarhus Convention.

Some surprising findings emerge from the first version of the Index. The top ten countries are: Lithuania, Latvia, Russia, the United States, South Africa, United Kingdom, Hungary, Bulgaria, Panama, and Colombia. These countries represent a mix of regions and income levels that shows that leadership in legislating environmental democracy is taking place in different contexts around the world. The top three highest scoring countries based on the legal indicator scores are all former Soviet states: Lithuania, Latvia, and Russia. In the mid-late 90s, these young democracies passed laws that placed an emphasis on transparency, citizen engagement, and access to justice. Lithuania and Latvia are also signatories of the Aarhus Convention, which was created in 1998 as the first legally-binding international convention for environmental democracy rights, demonstrating how this Convention helps to shape country performance in EDI.

EDI data also has direct relevance for government departments responsible for environment, human rights and governance, especially when complemented by other sources of data and indices on these topics.[2] EDI is a resource for bilateral and multilateral agencies in support of their engagement in less developed countries (LDCs).  The data generated by the Index contributes to country analysis and strategy in the environmental domain.  EDI country-level data can be used to inform policy dialogue, by highlighting deficiencies in environmental laws and their implementation in practice. For example, policymakers could use EDI to highlight the fact that their country does not proactively disclose pollution information, and use the finding to garner support with their constituents to create such a policy. Data produced under the justice pillar shows that only 10 of 70 EDI countries (14%) have legal mechanisms that help women access courts to obtain redress when their environmental rights are violated. Without assistance mechanisms to address economic and gender-based barriers, both women and the poor may be unable to access courts to seek redress for violations of their environmental rights.  Finally, the Index provides an entry point for capacity building efforts designed to strengthen environmental laws, their implementation and enforcement.

WRI has ambitious plans for scaling up the EDI in the next four years. We will expand the tool to include 30 additional countries, especially those in Africa and the Middle East. We will develop a full set of practice indicators that evaluate the extent to which national laws are effectively implemented, drawing on crowd-sourcing and mobile technology with civil society organizations. And we will support focused, capacity-building efforts with 10-15 governments that are committed to strengthening environmental law and practice. In the process, EDI is poised to make a substantial contribution to open and accessible data in the environmental domain, complementing other indices and supporting the development of environmental commitments in OGP country action plans.

[1] The Aarhus Convention is a multilateral environmental agreement through which opportunities for citizens to access environmental information are increased and transparent and reliable regulation procedure is secured. It has 47 signatories, including the European Union and 46 states. http://www.unece.org/env/pp/introduction.html