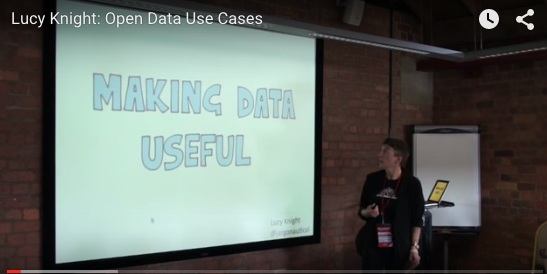 Back in the spring we hosted Local Open Data: Reaping the Benefits – a day devoted to raising awareness of the good stuff going on with open data at a local level. Now, with Open Data Camp coming to Manchester in October (and us sponsoring it), we thought it’d be a good time to share the videos of the speakers who came to the event. So if you missed it (or just want to catch up with it again) check out the videos and slides below!

Jamie Whyte leads the Intelligence and Innovation Lab at Trafford Council and is active in the Manchester open data community and speaks about Trafford’s Open Data Journey.

Bob Bailey works for Thomson Reuters as Chief Information Architect. He recently worked collaboratively with the Open Data Institute on Creating Value with Identifiers in an Open Data world and talks about the Value of Identifiers.

Lucille Brown leads the Smart Cities efforts for the Alliance across the seven Scottish cities. She previously spent a year working with Community and Engagement for OPEN Glasgow and speaks about Open Data, Smart Cities and the Scottish Cities Alliance.

Tom Smith is Director of OCSI a spin-out from Oxford University which works with public and community organisations to improve services. He also chairs the Environment Agency Data Advisory Group, and has been a member of the Cabinet Office Open Data User Group. He speaks about Local Open Data for Better Public Services.

Ian Watt is Board Trustee at CodeThe City, a civic hacking initiative in Aberdeen. He works with Open Data for the Scottish Government and is e-Government manager for Aberdeen City Council and speaks about Aberdeen’s Code for Europe.

Lucy Knight is the open data lead for Devon County Council, co-founder of ODI Devon and co-organiser of the Devon Open Data Forum. Her local authority role encompasses performance management, data management and transparency and her current projects include the Data Story Board concept and Beyond the Smart City. She discusses Open Data use cases.

The slides for all the presentations are available on our speakerdeck page.

Keep up to date with our news by signing up to our newsletter.
Thanks for reading all the way to the end!
We’d love it if you shared this article.