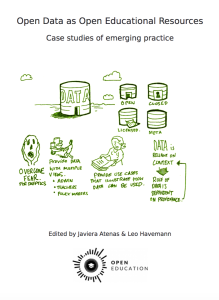 Book edited by Javiera Atenas and Leo Havemann: “…is the outcome of a collective effort that has its origins in the 5th Open Knowledge Open Education Working Group call, in which the idea of using Open Data in schools was mentioned. It occurred to us that Open Data and open educational resources seemed to us almost to exist in separate open worlds.

We decided to seek out evidence in the use of open data as OER, initially by conducting a bibliographical search. As we could not find published evidence, we decided to ask educators if they were in fact, using open data in this way, and wrote a post for this blog (with Ernesto Priego) explaining our perspective, called The 21st Century’s Raw Material: Using Open Data as Open Educational Resources. We ended the post with a link to an exploratory survey, the results of which indicated a need for more awareness of the existence and potential value of Open Data amongst educators…..

the case studies themselves. They have been provided by scholars and practitioners from different disciplines and countries, and they reflect different approaches to the use of open data. The first case study presents an approach to educating both teachers and students in the use of open data for civil monitoring via Scuola di OpenCoesione in Italy, and has been written by Chiara Ciociola and Luigi Reggi. The second case, by Tim Coughlan from the Open University, UK, showcases practical applications in the use of local and contextualised open data for the development of apps. The third case, written by Katie Shamash, Juan Pablo Alperin & Alessandra Bordini from Simon Fraser University, Canada, demonstrates how publishing students can engage, through data analysis, in very current debates around scholarly communications and be encouraged to publish their own findings. The fourth case by Alan Dix from Talis and University of Birmingham, UK, and Geoffrey Ellis from University of Konstanz, Germany, is unique because the data discussed in this case is self-produced, indeed ‘quantified self’ data, which was used with students as material for class discussion and, separately, as source data for another student’s dissertation project. Finally, the fifth case, presented by Virginia Power from University of the West of England, UK, examines strategies to develop data and statistical literacies in future librarians and knowledge managers, aiming to support and extend their theoretical understanding of the concept of the ‘knowledge society’ through the use of Open Data….(More)