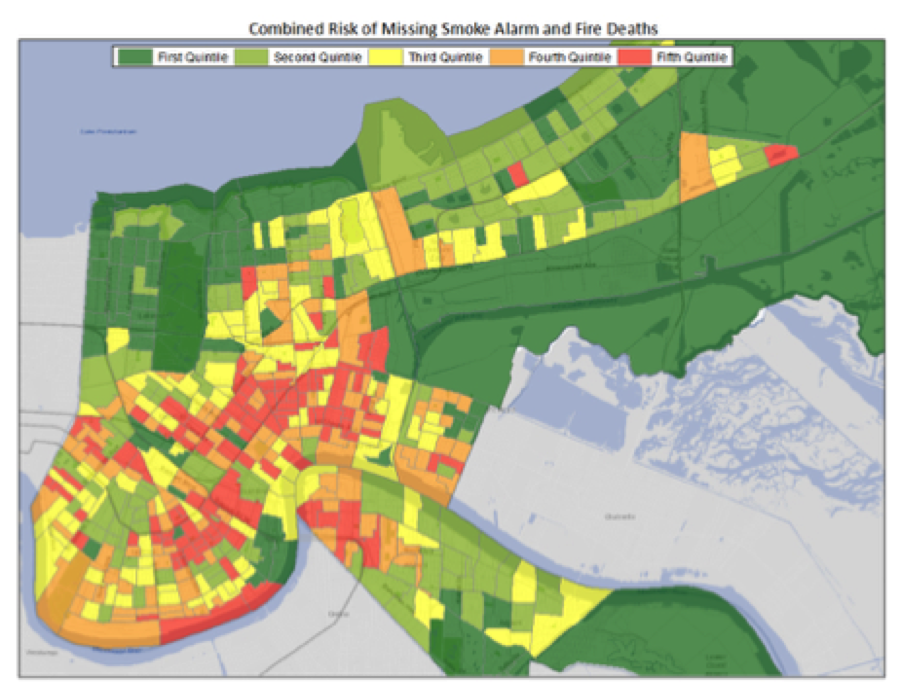 As people who are really passionate about data, we are constantly thinking about ways to use it to make the world a better place. Every 2 hours and 42 minutes a civilian death from fire occurs, according to the National Fire Protection Association. In 2013 alone, the US experienced 1.24 million fires, resulting in almost 20,000 deaths or injuries and causing over $11 billion in property damage.

Tragically, many of these deaths are preventable: three out of five home fire deaths occurred in buildings without working smoke alarms. The City of New Orleans is no exception to this rule. Between 2010 and 2014, structure fire led to 22 deaths. In all of these cases, no smoke alarms were present. On November 11, 2014, five residents, including three children died in a house fire in Broadmoor. The house did not have any working smoke detectors.

Increasing smoke alarm usage clearly has the potential to save lives. The challenge for cities is how best to target their efforts when information on which buildings have smoke alarms and which do not isn’t readily available. Recognizing the power of public data and analytics to improve City services, the New Orleans Fire Department (NOFD) and the Office of Performance and Accountability (OPA) led by Oliver Wise have started tackling this problem. Together, they have created a predictive model using publicly available data that is able to identify the areas of the New Orleans least likely to have working smoke alarms, yet most likely to sustain fire-related fatalities. The City announced this new initiative last week (see official press release and related coverage).

Enigma is proud to have provided infrastructure, technical assistance and peer review for this project.  Equipped with this analysis, the NOFD will conduct a targeted, risk-informed door-to-door smoke alarm outreach program. The effectiveness of the tool will be tested in the next few months through a NOFD-led survey, which will collect data on smoke-detector ownership in the blocks with the highest fire-fatality risk score. This prioritization tool, based on objective factors that are statistically correlated with missing smoke alarms, promises to save resources for the City while also reducing the number of fatalities.

The smoke detector ownership model (details presented here) harnesses the power of data science applied to publicly available data. Dylan Knaggs, an analyst at OPA, built a logistic regression model using the 2011 American Housing Survey (AHS). The outcome variable was measured with a question in the AHS, which asks respondents whether they have a smoke alarm in their house. The predictors used were a range of other property-related variables collected by the AHS. The variables that did the best job at explaining the variation in smoke detector ownership were poverty levels, building age, and length of stay in the residence.  Since the AHS goes down only to the city level, the team applied the model weights to poverty, building age, and length of stay data obtained from American Community Survey (ACS) to generate a risk score for each block group in New Orleans. To fine-tune the targeting of the areas with the highest risk of fire-related fatalities, the team augmented the missing smoke alarm score with a model that estimates the risk of fire fatalities by block group. The model uses as predictors the number of fires over the past 5 years, and the percentage of population within age extremes.  Averaging the standardized missing smoke alarm and fire fatality risk for each block group, the team created the final score that NOFD will use for its outreach program. These final scores are presented in the map below. The data and analysis will be posted to GitHub soon. 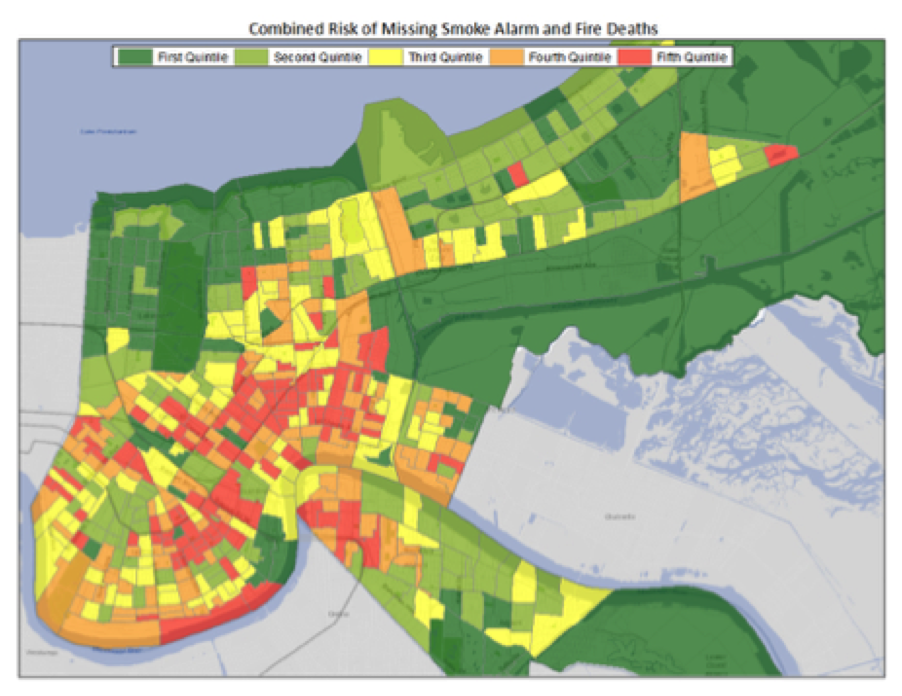 The immediate benefits of this effort are both preventative and operational. As a threshold matter, our research has shown that the people most vulnerable to death or injury in structural fires are the very young and the very old, likely due to a reduced ability to escape. Thus, providing early alerts to this vulnerable population should enable them to more successfully exit the structures. Moreover, as NOFD knocks on doors in these high-risk neighborhoods, they will gain significant insight about fire-prone buildings and thus they will learn whether persons at increased risk of injury or death in a structural fire are present, as well as the general condition and layout of the structure, critical information that may prove life-saving as they navigate a burning building.

Of course, the core mission of the smoke alarm program is to reduce fire-related deaths.  However, because such deaths are, statistically speaking, rare events that are dependent upon a wide range of factors, how to measure the success of the program? There are several possibilities. For example, as smoke alarms in high-risk buildings become more prevalent as a result of the program, there could be a decrease in the overall amount of time between the beginning of a fire and NOFD’s arrival on-scene, which would lead to fewer injuries sustained by firefighters as fires are brought under control before becoming more serious. This value could also be reflected in the amount of fire-related damage the buildings sustain. In any event, because the effort is data-driven in both outreach and outcomes, it will be possible to monitor progress and impact as the program moves forward. In short, now that NOFD can measure their progress, they can manage and improve it.

With this effort, NOFD and OPA have moved from passively handing out life-saving smoke alarms to actively reaching out to New Orleans’ most vulnerable residents, all thanks to a marriage of the expertise of firefighters with insights gleaned from open data. This entire effort will be open-sourced – OPA and Enigma will be posting the work to GitHub soon. The only data used in the analysis that isn’t freely available nationwide is the city’s fire incident data. We invite every city in the United States to add their own incident data to this model and launch a data-driven, outcome-focused smoke alarm program.  We at Enigma, with open data in our DNA, are proud to be a part of this important milestone in generating life safety from transparency.  Look for more in this space soon …

Mike Flowers & Raluca Dragusanu of Enigma; and Oliver Wise & Dylan Knaggs of the City of New Orleans, Office of Performance and Accountability