↓ Skip to Main Content
Home › Benefits of open data › On World Population Day, I’m older than 54% of the world’s population. What about you?

On World Population Day, I’m older than 54% of the world’s population. What about you?

How do you fit into the global population distribution? via population.io

I’m a huge fan of demography. I think it’s vital to understand the changing size, structure and distribution of the world’s population in order to make sense of pretty much any other trend – from poverty and inequality to urbanization and education.

Not only is population one of the most common denominators you’ll see in development statistics, it affects the decisions of individuals and policy makers on a daily basis. Where to buy a house? Where to invest in new public transport infrastructure or roads? How to plan social safety nets and welfare policies for the future?

But what about getting a personal perspective? How do you fit into the world’s population as a whole?

Using population.io to find your place in the world

Something the data lab team has been working on, along with collaborators from around the world, is The World Population Project – an interactive tool you can find at http://population.io/.

You enter your birthdate, sex, and country of birth, and you’re presented with a series of demographic statistics and visualizations. The chart at the top of the post shows my relative position it the World’s population (it’s effectively a population pyramid with no gender dimension) and the site then offers some other interesting perspectives on my life. 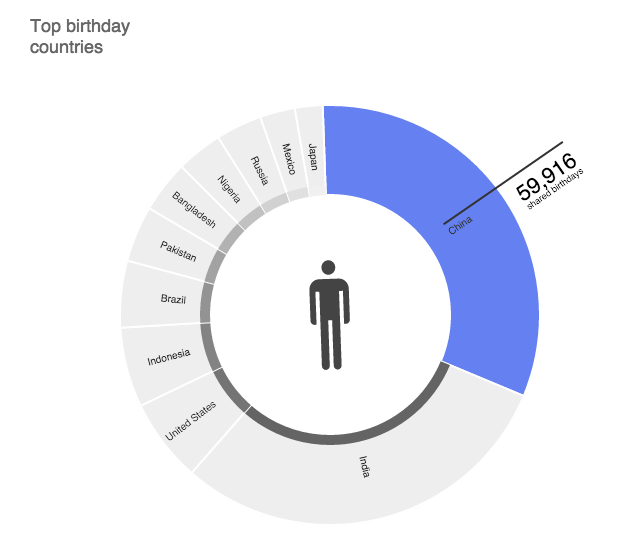 Whether you manage to figure that out or not, the site tells me I share a birth date with 311,000 around the world and unsurprisingly, a huge number of these people are in the world’s two most populous countries – India and China.

This makes me strangely happy for some reason, perhaps it’s the thought of ~9 million candles being blown out at the same time?

What if I spent my life in a different country?

Since I started working at the World Bank, one of the most surprising things I’ve learned was  from Branko Milanovic. He’s one of the world’s leading authorities on income inequality and he estimates that 80% of your income level can be explained by the “lottery of life”. Your citizenship at birth, the income status of your parents, your race and gender have much more to do with your wealth that most would like to admit. 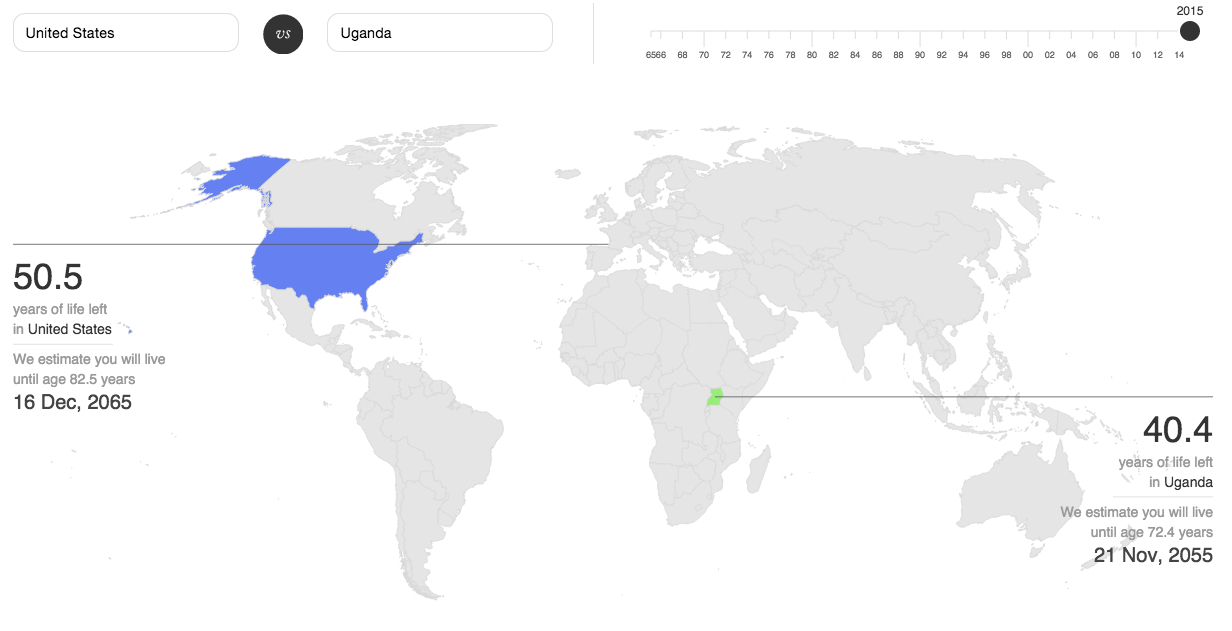 So it’s interesting to imagine how my life itself would differ had I been born and raised somewhere else. I was born in the United Kingdom, but my father was born in Uganda. If I continue to live in the United States, I can expect to survive another 50.5 years, but if I were living in Uganda, experiencing the typical life of a citizen there, that figure would be 10 years lower.  Sadly, this is another reality of life’s lottery.

What kind of data and demographic modelling are going into this?

I hope you get a chance to explore population.io – you can read more about the methodology used and check out the data API and source code for yourself.

The data are coming from various UN sources that include sex-disaggregated population estimates, and age-specific life expectancies. Since most of the data are at an annual or 5-year resolution, the figures are interpolated down to the daily levels that the site displays.

As an aside, you can also get a hold of population data and projections from the Bank’s Open Data site and we just published a Subnational Population Database which contains estimates for the first administrative level below the national level.

And for a final dose of demography, don’t miss this episode of “The Data Minute” which asks: “How many people have ever lived?”

ps: if you want to check your answer to the Birthday Problem, check out the Wikipedia Page