I’ve spent a lot of time scouring New York City’s Open Data Portal and one thing I’ve noticed is a dearth of crime data.  Sure, the NYPD has created a crime map, which may be a curious thing to browse on a one-off, but it’s not much use to those who want to analyze the city.  No data?  No analysis.  It’s a real shame that the NYPD is not leveraging the analytical talents of the city’s citizens.

That being said, there have been a few small steps in the right direction lately as far as police transparency.  First, after years of demand, the NYPD released its traffic collision data.  Though it’s not crime data, it does show a willingness of the department to change its attitude about opening up information.  (It’s important to note though that someone had already written a PDF scraper to release the data for them, so by the time they released it, is was more of a formality than anything.) Second, City Comptroller Scott Stringer recently released a map of all lawsuits filed against the police in 2013 as part of ClaimStat.  According to the ClaimStat report, these lawsuits are “primarily of allegations of police misconduct, civil rights violations, and injury and/or damage from accidents involving police vehicles.” Although the Comptroller’s office released the data under the banner of transparency, they too gave us only a map and failed to release the underlying data.

Luckily, Chris Whong showed me how to unlock the data hidden within the ClaimStat map, so with that I analyzed the entire year of lawsuits filed against the police.

I started by creating a heat map, showing how the 3,800 police lawsuits were distributed in 2013: 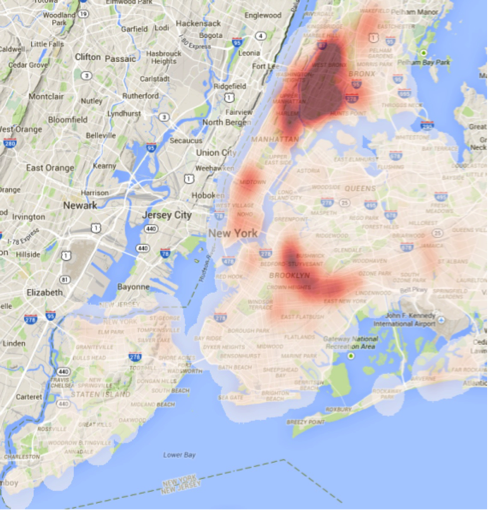 While these lawsuits were present throughout the five boroughs, the map shows that they were anything but evenly distributed.

The largest hotspot in the map is clearly in the Bronx, but there are others.  A look at the number of lawsuits filed per one-thousand residents in each borough also shows that Bronx residents were more than two times as likely to file a suit than residents from Brooklyn and more than six times more likely than residents of Staten Island:

For more granularity, I also looked at rate of lawsuits in each neighborhood (or Neighborhood Tabulation Area (NTA) to be more specific): 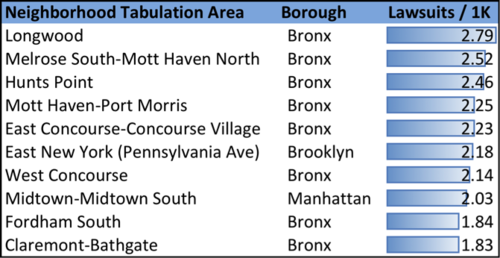 Longwood in the Bronx had the highest rate, which is 2.79 lawsuits per one-thousand residents, more than six times the rate of the city as a whole.  Eight of the top ten neighborhoods were in the Bronx, though East New York did make an appearance at number six and Midtown showed up at number eight.  I’ve included an interactive table below with all NTA’s and their statistics so you can look up your own neighborhood.

With our city’s attention turning to the tragic loss of Eric Garner, I was wondering what the lawsuits rates were within Staten Island.  The following map shows where the 109 lawsuits filed in 2013 originated, as well as a red star for the site of Eric Garner’s death: 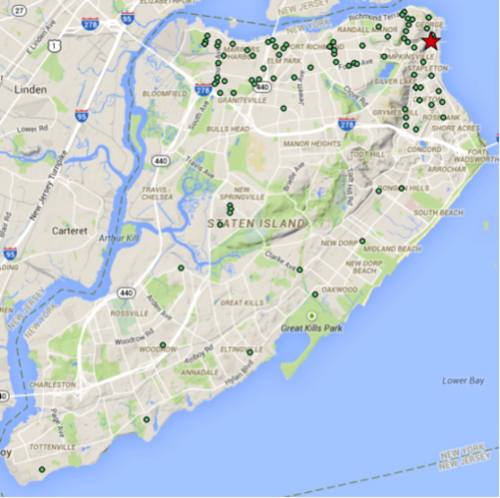 Zooming into that location more specifically, we can see that in 2013 alone there were three lawsuits filed within two blocks, including one across the street at 201 Bay Street.  (Garner’s death was at 202 Bay Street and 2014 data is unavailable.)  In fact the NTA where the incident occurred, Stapleton/Rosebank, had the second highest lawsuit rate on Staten Island, (though 36th overall in NYC). 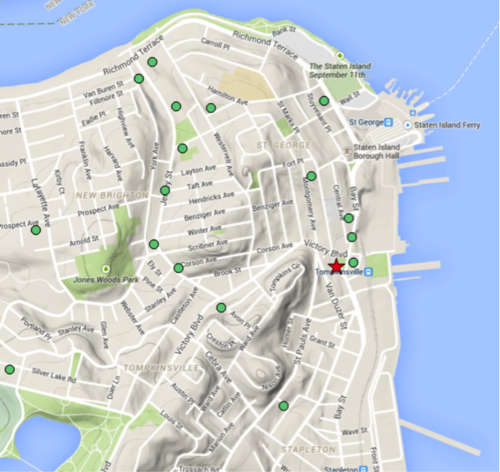 There are a few caveats here.  First, I’m assuming from the title that the large majority of those who file lawsuits are residents of the City, though I lack data to back up that intuition.  But more importantly, there are generally more crimes reported in many of the neighborhoods referenced, which means more police interactions and inevitably more lawsuits.  I would love to normalize for crime rate, but as I have said, the NYPD won’t release that data.  They do release aggregated crime data at the precinct level though, and the Comptroller’s own analysis shows a similar trend in the Bronx, even when normalized for crime rates.

One other thing I noticed; incidents on Sundays led to only about 6.0 lawsuits per day, while non-Sunday incidents led to about 11.2, nearly twice the rate.  Could it be that crime is that much lower on Sundays in general, or is something else going on?  Once again, I lack the data to dig any deeper there, but feel free to reach out if you have an idea.

Normalized or not, the data shows that policy makers needs to look long and hard at police/citizen interactions in various hot spots across the city.  This type of analysis can help us to direct resources, whether that be police training, CCRB officers or community based resources, to the areas that need them most.