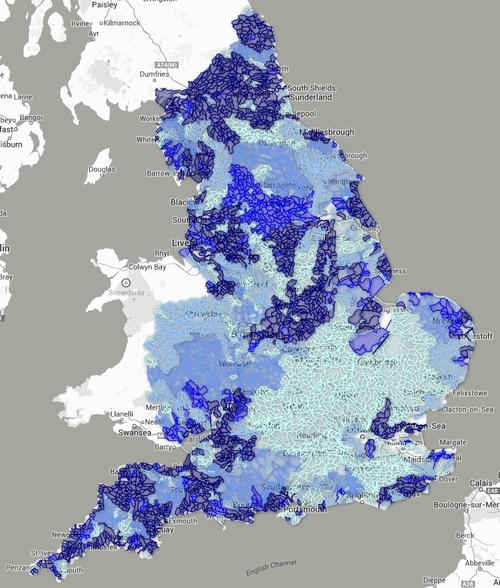 Created automatically from RSS feedPosted on February 10, 2015 Posted in Benefits of open data, Informing Decision-making, Posts from feeds, Transparency
This post was created automatically via an RSS feed and was originally published at http://mapgubbins.tumblr.com/post/110652245100

The dataset indicates whether, and for what percentage of time, additional water may be available for consumptive abstraction from river, lake and transitional water bodies in England.

The dataset tells us two things about each water body: whether water resources are available for abstraction licensing, and the percentage reliability of consumptive abstractions.

I have made an interactive map to visualise the percentage reliability:

(The map has some performance issues due to the size of the dataset. For more serious use it would be sensible to generalise the catchment polygons.)

See the documentation for more information about the Water Resource Availability dataset.

Other data on water abstractions

There are also a couple of related Environment Agency datasets that are not currently available as open data.

One is the Water Abstraction Licences themselves. An unlocking request was submitted for that dataset last year. In the meantime the licences are visualised on EA’s own interactive map.

There also seems to be a spatial dataset called Consumptive Groundwater Water Abstractions, which shows long term averages of water abstracted from the ground.

Image: map derived from the dataset described above. Data is © Environment Agency copyright and/or database right 2014. All rights reserved.