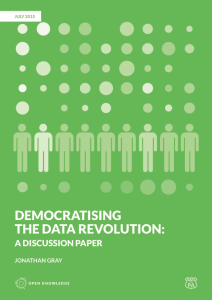 Created automatically from RSS feedPosted on July 9, 2015 Posted in Benefits of open data, Informing Decision-making, Posts from feeds, Transparency
This post was created automatically via an RSS feed and was originally published at http://blog.okfn.org/2015/07/09/democratising-the-data-revolution/ “New technologies are leading to an exponential increase in the volume and types of data available, creating unprecedented possibilities for informing and transforming society and protecting the environment. Governments, companies, researchers and citizen groups are in a ferment of experimentation, innovation and adaptation to the new world of data, a world in which data are bigger, faster and more detailed than ever before. This is the data revolution.” – UN Data Revolution Group, 2014

What will the “data revolution” do? What will it be about? What will it count? What kinds of risks and harms might it bring? Whom and what will it serve? And who will get to decide?

Today we are launching a new discussion paper on “Democratising the Data Revolution”, which is intended to advance thinking and action around civil society engagement with the data revolution. It looks beyond the disclosure of existing information, towards more ambitious and substantive forms of democratic engagement with data infrastructures.1

It concludes with a series of questions about what practical steps institutions and civil society organisations might take to change what is measured and how, and how these measurements are put to work.

You can download the full PDF report here, or continue to read on in this blog post.

Rather than just focusing on the transparency, disclosure and openness of public information, civil society groups can argue for changing what is measured with existing data infrastructures. One example of this is recent campaigning around company ownership in the UK. Advocacy groups wanted to unpick networks of corporate ownership and control in order to support their campaigning and investigations around tax avoidance, tax evasion and illicit financial flows.

While the UK company register recorded information about “nominal ownership”, it did not include information about so-called “beneficial ownership”, or who ultimately benefits from the ownership and control of companies. Campaigners undertook an extensive programme of activities to advocate for changes and extensions to existing data infrastructures – including via legislation, software systems, and administrative protocols.2

As well as changing or recalibrating existing forms of measurement, campaigners and civil society organisations can make the case for the measurement of things which were not previously measured. For example, over the past several decades social and political campaigning has resulted in new indicators about many different issues – such as gender inequality, health, work, disability, pollution or education.3 In such cases activists aimed to establish a given indicator as important and relevant for public institutions, decision makers, and broader publics – in order to, for example, inform policy development or resource allocation.

Historically, many civil society organisations and advocacy groups have collected their own data to make the case for action on issues that they work on – from human rights abuses to endangered species.

Recently there have been several data journalism projects which highlight gaps in what is officially counted. The Migrant Files is an open database containing information about over 29,000 people who died on their way to Europe since 2000, collated from publicly available sources. It was created by a network of journalists who were concerned that this data was not being systematically collected by European institutions. In a similar vein The Counted project from The Guardian records information about deaths in police custody in the US, explicitly in response to the lack of official data collection on this topic.

The Role of the Open Data Movement

The nascent open data movement has often focused on the release of pre-existing information about things which are already routinely measured by public institutions. Advocates have pushed for the release of datasets under open licenses in machine-readable formats to facilitate widespread re-use – whether to develop new applications and services, or to facilitate new forms of journalism and advocacy. Datasets are often published via data portals, of which there are now hundreds around the world at local, regional, national and supranational levels.

As well as opening up new datasets, some public institutions have implemented mechanisms to gather input and feedback on open data release priorities, such as:

In principle these kinds of mechanisms could be used not just to inform priorities for the release of existing datasets – but also in order to facilitate engagement between institutions and civil society actors around what should be measured by the public sector and how.

To use a metaphor, if data can be compared to photography, then might the open data movement play a role in intervening not just around access and circulation of snapshots taken by public institutions, but also around what is depicted and how it is shot?

We would like to catalyse discussion and gather input about how to increase civil society engagement around the data revolution and questions about what should be measured and how. To this end, we invite advocacy groups, journalists, public institutions, data users, researchers and others to respond to the following questions.

What Can Civil Society Groups Do?

What Can Public Institutions Do?

We welcome responses on these and other topics via the channels below: