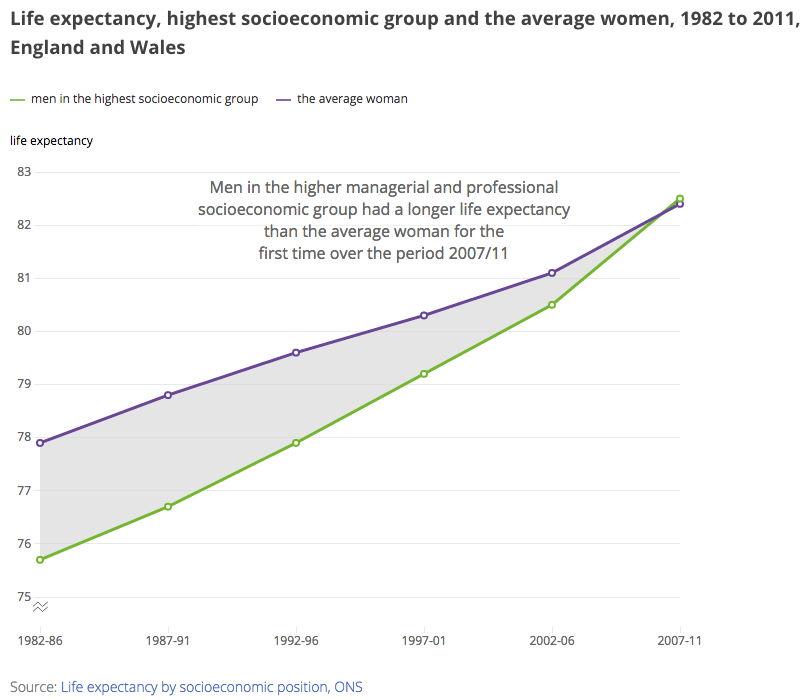 Men in the highest professions are outliving the average woman in England and Wales for the first time.

Research on life expectancy by socioeconomic position between 2007 and 2011 revealed that men in the most advantaged group of higher managerial and professional could expect to live for 82.5 years; marginally longer than an average woman at 82.4 years.

Despite this, women in the most advantaged socioeconomic group – which takes into account an individual’s occupation, education and salary – still have the longest life expectancy at 85.2 years.

Life expectancy, highest socioeconomic group and the average women, 1982 to 2011, England and Wales

Since the 1970s, men have been catching women up in terms of survival. The decline of the mining industry and the move away from physical labour and manufacturing industries towards the service sector is a likely cause, along with a reduction in the proportion of men smoking.

The full report includes further information on trends in individual social classes for life expectancy at age 65 as well as at birth and on trends in alternative measures of inequality.

What is the life expectancy for your socioeconomic group? Enter your occupation and find out:

***Bulletin: Trend in Life Expectancy at Birth and at Age 65 by socioeconomic position based on the National Statistics Socioeconomic Classification: 1982 – 86 to 2007-11, England and Wales.