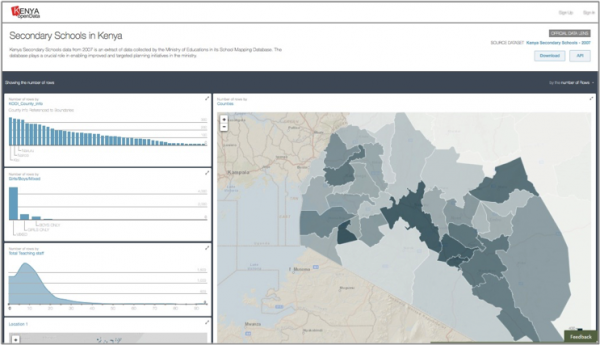 Today, four years later, KODI enters an exciting, new phase. Kenya has re-launched its national open data portal. This is more than just a reboot; it is more than a relaunch of a newly re-designed portal. It represents a big step forward in how data is becoming a vital utility provided by governments to its citizens, businesses, and civil society. Kenya once again is proving itself to be a prime mover in Africa — which is especially important with the approach of the first continent-wide Africa Open Data Conference on September 4-5 in Dar es Salaam, Tanzania.

Kenya Embraces Data as a Utility

Data as a utility is becoming the new normal. In this, Kenya may be the first in Africa to truly see the path forward — and to start walking it.

“Kenya is a great example of something important happening with governments all over the world at all levels — city, county, state, and national agencies — where access to data is being recognized as more like access to water or electricity, a necessity to power 21st-century life. It is a new paradigm of digital government, where data is a vital utility integrated into consumer-friendly applications, data-driven services, and citizen engagement,” observes Kevin Merritt, Founder and CEO at Socrata.

In recent years, Kenya received notable criticism as an example of an open data initiative that stalled. In truth, criticism of Kenya became a meme at odds with reality.

Progress in open data did slow (hey, open data across a big government is hard). But as today reinforces, Kenya has made tremendous strides in releasing high value data and retaining a remarkable level of engagement with its open data portal. The numbers tell the tale:

Does this mean open data has changed the face of Kenya? Not yet. But the portal is definitely getting used and engaging audiences. And data-driven applications are beginning to emerge.

Kenya’s new approach to data as a utility is designed to enable greater and broader understanding of important issues that matter to Kenya’s citizens. High value information for high priority needs — and easier ways to get insights.

Linet Kwamboka, Kenya Open Data Project Coordinator, put it in powerful, simple terms when speaking about open data as a utility: “This amazing resource is available to the public for free. People should know this and take advantage. It’s the way to making better decisions for oneself, the community and country.” And that in a nutshell is what delivering government data as a utility is all about.

As part of this, the ICT Authority is not merely turning the data taps on. It is making data more understandable, explorable, and usable for more people with innovations such as:

Open Budget — an application that replaces incomprehensible budget data with an intuitive, interactive tool for citizens, officials, and other stakeholders to explore how the public’s money is invested, bringing genuine transparency to Kenya’s budget.

Data Lens — a new, visual way to explore and experience data that makes it easy for citizens and others to get answers to their questions in a visual, intuitive way without getting lost in data.

“The impact of data as a utility is real — informing the daily decisions of government employees and citizens in ways that improve quality of life, unleash new economic opportunity, and increase operational excellence in government,” said Merritt. Socrata is proud to be a partner with the government of Kenya in this revolutionary effort, and we look forward to its continued innovations in data-driven government.

Jeff Kaplan is Socrata’s Director of Multilateral & NGO, responsible for work with multilateral and non-governmental organizations globally, including UNDP, World Bank, Oxfam America, Bill & Melinda Gates Foundation, as well as having regional responsibility in Africa. Jeff has been a high-profile expert in the global open data space for years. Prior to joining Socrata, he worked with the World Bank leading groundbreaking open data work with countries such as Mexico, Moldova, Nigeria, Russia, and Rwanda.