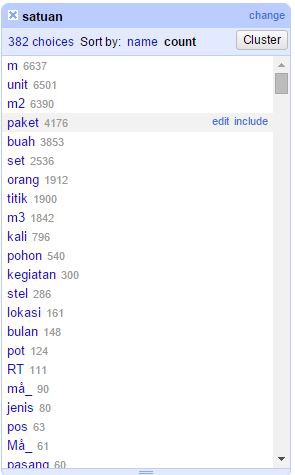 To give you a brief background, musrenbang is Indonesia’s flavor of participatory, bottom-up budgeting. The idea is that people can propose any development for their neighbourhood through a multi-stage budgeting process, thus actively participating in shaping the final budget for the city level, which will then determine the allocation for each city at the provincial level, and so on.

The catch is, I’m confident enough to say that not many people (especially in big cities) are actually aware of this process. While civic activists tirelessly lament that the process itself is neither inclusive nor transparent, I’m leaning towards a simpler explanation that most people simply couldn’t connect the dots.

People know that the public works agency fixed that 3-foot pothole last week. But it’s less clear how they can determine who is responsible for fixing a new streetlight in that dark alley and where the money comes from. Someone might have complain to the neighbourhood leader (Pak RT) and somehow the message gets through, but it’s very hard to trace how it got through. Just keep complaining to the black box until you don’t have to. There are very few people (mainly researchers) who get to see the whole picture.

This has now changed because the brand-new Jakarta open data portal provides musrenbang data from 2009. Who proposed what to whom, for how much, where it should be implemented (geotagged!), down to kelurahan/village level, and whether the proposal is accepted into the final city budget. For someone who advocates for better availability of open data in Indonesia and is eager to practice my data wrangling skill, it’s a goldmine.

The data is also, as expected, incredibly messy. While surprisingly most of the projects proposed are geotagged, there are a lot of formatting inconsistencies that makes the clean up stage painful. Some of them are minor (m? meter? meter2? m2? meter persegi?) while others are perplexing (latitude: -6,547,843,512,000  –  yes, that’s a value of more than a billion). Annoyingly, hundreds of proposals point to the center of the National Monument so it’s not exactly a representative dataset.

For fellow data wranglers, pull requests to improve the data are gladly welcome over here. Ibam generously wrote an RT extractor to yield further location data, and I’m looking into OpenStreetMap RW boundary data to create a reverse geocoder for the points.

A couple hours of scrubbing in OpenRefine yields me a dataset that is clean enough for me to generate the CartoDB map I embedded at the beginning of this piece. More precisely, it is a map of geotagged projects where each point is colored depending on whether it’s rejected or accepted.