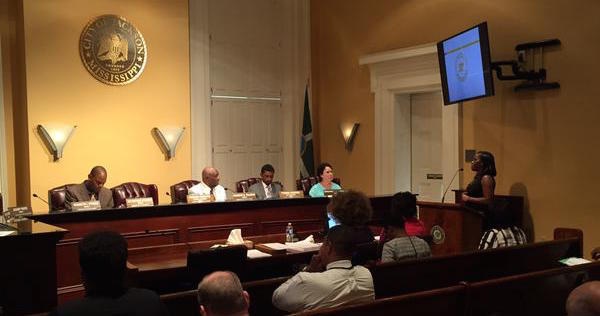 Created automatically from RSS feedPosted on September 1, 2015 Posted in Benefits of open data, Informing Decision-making, Open Government, Posts from feeds, Transparency
This post was created automatically via an RSS feed and was originally published at http://sunlightfoundation.com/blog/2015/09/01/jackson-miss-becomes-first-what-works-city-to-sign-executive-order-on-open-data/

In a huge step forward for transparency in the city of Jackson, Miss., Mayor Tony Yarber has today signed an executive order that will create an open data policy and establish a powerful commitment to government openness.

Making key datasets available to the public is a crucial part of Jackson’s commitment to the What Works Cities initiative, a three-year program to help local governments across the nation use data and evidence to improve their residents’ lives. Jackson, among the first round of cities selected for What Works Cities, is the first in the program to sign an executive order on open data.

“Jackson will codify and standardize open data processes and policies to share data openly with residents, as well as internally,” said Yarber in a press release. “We’ll ensure staff across city departments understand the purpose of data collection, regularly collect and publish data, and make decisions based on such data.”

Based upon best practices in open data, the order seeks to establish a culture of transparency and accountability amongst city leaders and agencies. The executive order also sets the default to open — the basis of Sunlight’s Open Data Policy Guidelines — creating a positive change in the way Jackson’s government operates and how it serves its constituents.

Jackson will now start to take inventory of the data that it collects and determine how it will collect data moving forward, as well as embark upon a public engagement process that prioritizes datasets based on community input. In the coming weeks, Jackson will convene an open data governance committee to tackle the implementation of the executive order.

As a partner in What Works Cities, Sunlight traveled to Jackson to meet with stakeholders, department and agency heads, as well as Mayor Yarber to discuss crafting a policy that would fit the needs of Jackson. While there, Sunlight was able to see first-hand how an open data policy could help drive the decision-making process for Jackson and increase community engagement. Yarber described the changes he wanted to make in Jackson and how he wanted to bring Jackson together through open data; Sunlight is grateful to have been able to work with the city to help integrate Mayor Yarber’s vision for open data into this new policy.

In the future, Sunlight will continue to provide expert advice to city officials in developing the open data policy and making this information truly open and accessible to the public. As an additional partner on the What Works Cities initiative the Johns Hopkins Center for Government Excellence will also be playing a role in helping Jackson leverage open data to make evidence-based decisions.

Sunlight is excited to be a partner in What Works Cities and looks forward to continuing support to the City of Jackson. Congratulations to Mayor Yarber, Director of Innovation and Performance Justin Bruce, Director of Constituent Services Beatrice Slaughter and Chief Administrative Officer Gus McCoy for moving forward with the city’s first open data policy.