↓ Skip to Main Content
Home › Benefits of open data › In the Fight for Open Nonprofit Data, Everything Changed in June

In the Fight for Open Nonprofit Data, Everything Changed in June

Created automatically from RSS feedPosted on July 2, 2015 Posted in Benefits of open data, Posts from feeds
This post was created automatically via an RSS feed and was originally published at http://www.marketsforgood.org/in-the-fight-for-open-nonprofit-data-everything-changed-in-one-month/

This post was created automatically from a feed, and was originally published at: http://www.marketsforgood.org/in-the-fight-for-open-nonprofit-data-everything-changed-in-one-month/

In recent years, the federal government has taken strides towards making its public data available in standardized, machine-readable formats. In the future, we will look back at the nation’s first open data mandate, the DATA Act of 2014, and see it was critical not just in its transformation of federal spending information into open data, but also in its role as an archetype for a larger, government-wide transformation.

Today, untold stores of valuable public data, across many different government domains, are buried within non-searchable documents. There is much work to be done in chipping away at antiquated policies and procedures keeping this information from light. Transforming it all into open data will take years of acts of Congress, new infrastructure, and strong leadership within the executive branch.

But there are some places where much quicker change now seems possible. The Internal Revenue Service’s Form 990 is one of these. For Form 990, everything seemed to change in the single month of June, 2015.

Form 990 data: Valuable and public — but not open

The U.S. nonprofit sector is the largest in the world, a multi-trillion dollar industry — and larger today than it’s ever been. In a 2013 report, the Aspen Institute points out, “[T]his robust sector has grown one hundred fold while giving rise to everything from the civil rights, environmental, and Tea Party movements to revolutions in agriculture, medicine, and the media. Universities, churches, foundations, charities, and social service organizations of all kinds are major drivers of culture, art, religion, science, and altruistic services in the United States.”

“The public, government, media, and nonprofits themselves all need access to accurate, accessible information on the robust nonprofit sector.”

The IRS’ Form 990, the primary tax return form for nonprofit organizations, is our window into the nonprofit sector. Every IRS recognized tax-exempt organization must file some iteration of the form, be it the regular Form 990, the Form 990-PF for private foundations, or Forms 990-EZ and 990-N for medium-sized and small nonprofits. The Form 990 family is critical to understanding the U.S. nonprofit sector. Beyond basic finances, it also details the mission, activities, and organizational structure of each nonprofit.

Data on nonprofits’ finances and operations is valuable to a great number of institutions. The public, government, media, and nonprofits themselves all need access to accurate, accessible information on the robust nonprofit sector.

VIDEO – IRS 990 forms: An explainer by Suzanne Perry of The Chronicle of Philanthropy

“Timely public access to the Form 990 is crucial to understanding the size and scope of the nonprofit sector, its role in our economy and trends in private and public sector giving.  Public availability of these forms also leads to greater compliance with the law, improved form accuracy and better accountability, as donors, prospective donors, and regulators all make use of this information.  In short, the efficient, timely, and accurate submission of Forms 990 is of paramount importance to non-profit organizations, the public, researchers, and policymakers at all levels.” – Aspen Institute PSI

Unlike most tax information collected by the IRS, Form 990 information is legally public. In exchange for a tax exemption, nonprofits allow the public to scrutinize their operations. Unfortunately, the process by which the IRS currently makes 990 forms available makes their information extremely difficult to use.

Today, the IRS collects most Forms 990 through electronic filing (“e-filing”), which means the information comes into the agency as searchable data. But some Forms 990 are collected as paper documents or PDFs.

To make this information public, the IRS prints all Forms 990 on paper–even the ones originally submitted as searchable data!–and scans them, then publishes the scans in the Tagged Image File (TIF) format on DVDs. These image files, which are voluminous on each DVD because TIF format treats each page of a form as its own file, can be read by humans but not processed by computers.

People and institutions who need to use Form 990 information must spend millions of dollars converting the images from the IRS’ DVDs into data — even for the 990s that came into the IRS as data to begin with.

A growing chorus of advocates for change

If only this information were uniformly collected from nonprofits as open data, then uniformly published by the IRS in the same way!

A formidable group of advocates has begun to call for just that: first, universal e-filing of the Form 990 so that all the information comes into the IRS as open data to begin with; and second, the publication of this information as open data.

The Aspen Institute’s Program on Philanthropy and Social Innovation has been a leader on this front since the publication of its influential 2013 report, Information for Impact: Liberating Nonprofit Sector Data, by Beth Noveck and Daniel Goroff.

Since then, proposals to mandate Form 990 e-filing and require the release of Form 990 data have been issued by President Obama and Republican and Democratic chairs of the House Ways and Means Committee and Senate Finance Committee. Earlier this year, Congressman Mike Quigley (D-IL) introduced legislation that included a section requiring the IRS to expand e-filing to cover all nonprofits and to both collect and publish nonprofits’ Forms 990 in a nonproprietary machine-readable format.

But even though everyone seemed to be in favor of transforming Form 990 into open data, none of these proposals became law. Each was part of a much larger legislative package: President Obama’s 2015 budget, Republican and Democratic tax reform proposals, and Rep. Quigley’s wide-ranging Transparency in Government Act.

In January 2015, a Government Accountability Office report entitled TAX-EXEMPT ORGANIZATIONS: Better Compliance Indicators and Data, and More Collaboration with State Regulators Would Strengthen Oversight of Charitable Organizationsrecommended that Congress consider expanding the mandate for electronic filing of nonprofit tax forms in order to improve oversight and transparency of the nonprofit sector. 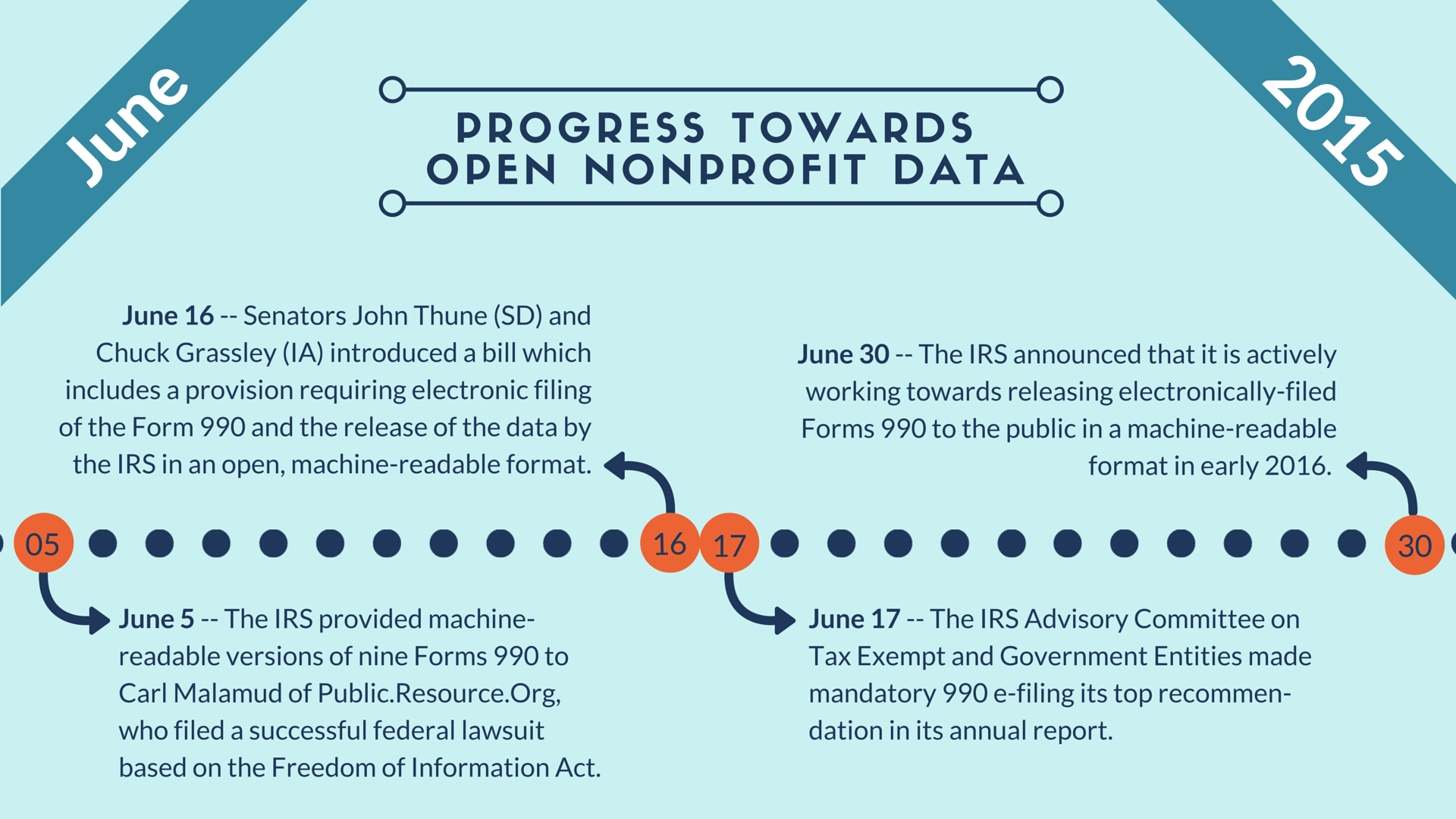 June 2015 was a big month for the growing chorus of individuals and organizations advocating for open nonprofit data.

On June 5, the IRS provided machine-readable versions of nine Forms 990 to Carl Malamud of Public.Resource.Org, who filed a successful federal lawsuit based on the Freedom of Information Act. On June 16, Senators John Thune (SD) and Chuck Grassley (IA) introduced a new taxpayers’ rights bill that includes a provision requiring universal electronic filing of the Form 990 and the release of the data by the IRS in an open, machine-readable format. On June 17, the IRS Advisory Committee on Tax Exempt and Government Entities made mandatory 990 e-filing its top recommendation in its annual report and called for support of a congressional mandate for e-filing and open data publication. On June 30, the IRS announced that it is actively working towards releasing e-filed Forms 990 to the public in a machine-readable format in early 2016.

To be sure, June 2015 seemed like a month of fast change. But these events would not have happened without years of groundwork, including the Aspen report more than two years ago and Malamud’s expensive and determined pursuit of public access under the Freedom of Information Act.

None of these events, standing alone, guarantees a universal transformation of all Forms 990 from outdated documents into open data. Malamud’s successful lawsuit and the IRS’ announcement apply to Forms 990 that were originally e-filed, not Forms 990 that are submitted to the IRS as documents or PDFs. The Thune-Grassley bill faces the same challenges as any legislation. The Advisory Committee’s recommendation is not binding.

However, considered together, these four positive steps strongly suggest that the full transformation — universal e-filing plus universal open data publication — is coming, and soon.

How can we make sure? The Data Transparency Coalition and its members and allies need to hold the IRS accountable to its commitment for 2016, keep public attention on the Advisory Committee’s broader recommendation, and ask Congress to move a universal open data mandate.

Transforming nonprofits’ tax filings into open data is part of the Coalition’s broader policy agenda for open data. Some items on that agenda — for instance, the adoption of open data formats for federal laws and regulations–might seem remote. But the events of June 2015 should teach us that the right groundwork can culminate quickly, just as the 2013 Aspen report and Malamud’s lawsuit appear to have done.

To stay up to date with the latest Markets For Good articles and news, sign up to our newsletter here. Make sure that you are also following us on Twitter!