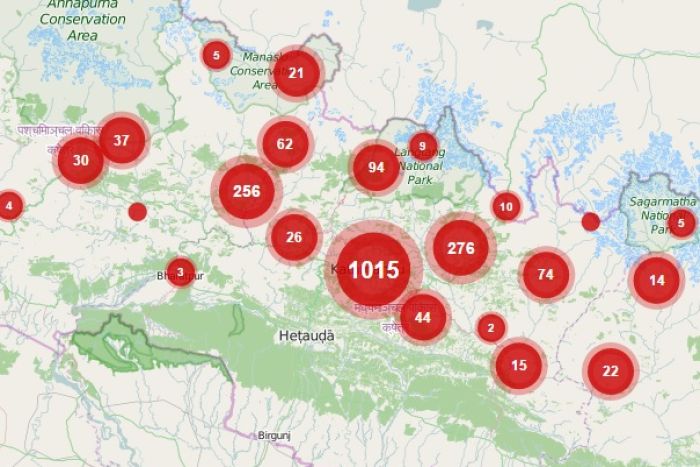 The earthquake in Nepal in May exposed the national government’s unpreparedness to deal with the aftermath of a huge natural disaster, but it also gave rise to a movement of young Nepalese people with the skills required to help their country in its hour of need.

A group of educated, tech-savvy men and women launched Quakemap.org, a website that made up for the shortfall in official information in the immediate aftermath of the quake.

Quakemap.org invited people to report earthquake damage in real-time and list what kind of aid was required around the country.

For example: someone in contact with, or living in, an affected community might mark on the map that 50 tents were needed in a certain district.

People could also mark areas where people were trapped, where roads were blocked and where shelters had been set up.

There were over 2,000 reports made on the map, from all across Nepal.

While phone networks were sketchy in the days following the quake, many people — even in remote regions — had access to the internet on their mobile phones and this became the primary method of communication for those affected by the disaster.

This information registered on Quakemap.org was public and thus instantly available to both official and ad-hoc aid groups.

Once the aid had been delivered or if the needs of a community changed after the initial report, the database could be instantly updated to prevent redundant supplies being sent out.

One of the major challenges following the earthquake was the void in information — there was a gap between what victims were looking for and what relief organisations were providing.

Dr Budhathoki said the earthquake led to a mobilisation of young urban Nepalese wanting to help their countrymen.

“It’s unbelievable, they were proactive and working cooperatively.

“It has inspired the whole of Nepal.”

“Obviously we could have had better coordination in terms of crisis coordination, even among the formal organisations,” he said.

He maintains while the interactive map made use of interesting technology, rapid communication is what made it work.

“A lot of people over-emphasise the technology,” Dr Budhathoki said.

“The effort in technology was about 20 per cent. The rest of the effort was in closing the loop, in what you do with the information.

“We tried to close as many reports as possible — that was a lot of work and many phone calls.”

The quality of the information on Quakemap.com was so good the Nepalese Army turned to it in coordinating its relief distribution efforts.

“Being small is actually good, you can quickly make decisions and move quickly,” Dr Budhathoki said.

The Nepalese government has responded to the social success story.

It has established the National Volunteer Program — a network of organisations including Kathmandu Living Labs that can mobilise quickly and cooperate to respond to crises on a similar scale.

There were other ways technology and social media came to the aid of the Nepalese when official bodies failed to do so.

Started by a local photojournalist, it brought together images of quake damage that were seen by tens of thousands of followers around the world.

The crowd-sourced pictures also gave people an insight into the degree of damage suffered in hard-to-reach regions.

The @nepalphotoproject account also spread the word about Quakemap.org and posted photos of missing people in the days after the earthquake.

Both projects were a kind of rolling coverage with added information — useful data that people from around Nepal and the world could use to direct their help quickly and effectively, during a period that was otherwise characterised by chaos.