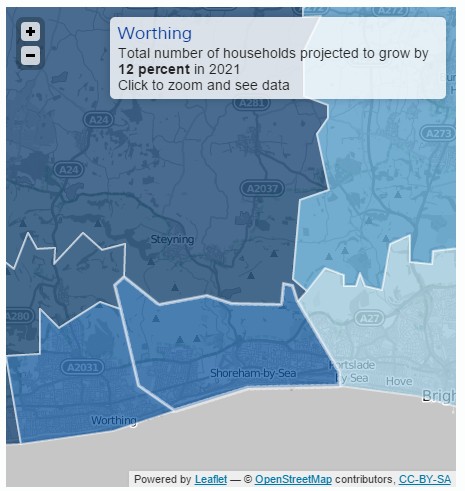 Household figures for local authority districts in England are derived by the Department for Communities and Local Government (DCLG) from a household projections model that uses sub-national population figures from ONS.

The counts of households are disaggregated by age band, gender of household representative and relationship groups. All figures are captured annually back to 1991 and projected forward to 2037, which makes them useful for planning purposes both inside and outside local government.

The projections are published on GOV.UK as a collection of official and national statistics.

In addition to the official and national statistics, DCLG has released detailed data for modelling and analytical purposes, suitable for use as inputs to local models.

The most recent release of detailed data was in December. The release included the following notes on copyright and re-use:

I emailed both DCLG and ONS, pointing out that most of their statistics are re-usable as open data under the Open Government Licence. I asked why this dataset was an exception. I anticipated there might be a good reason, such as third-party intellectual property rights in the data (or in the household projections model).

ONS replied the next day as follows:

With regards to our population estimates then these are re-usable under the OGL. Because this is a DCLG publication and our estimates may have been used purely as a contributing factor in the final projections, it would be best for them to provide you with a definitive answer.

But DCLG ignored my query, as well as a follow-up email four weeks later.

I waited another week and then rephrased my query as an information request (to engage the Freedom of Information Act). I asked for the content of any correspondence or documentation held by DCLG that explained or provided a rationale for the licensing restrictions on re-use of the Household Projections dataset, with particular reference to any reason why the dataset should not be available for re-use under the OGL.

This week DCLG responded: information not held. In other words the department has no record of why it decided to restrict re-use of the Household Projections detailed data.

However DCLG has said it will “consider whether OGL is appropriate for the next release of Household Projections expected later this year.”

It’s good news that DCLG will at least look at this issue, and the lack of information held probably means there is no third-party IP constraint on open data release.

However the lack of information also suggests DCLG is automatically applying re-use restrictions to new data releases without any formal procedure for consideration of more open licensing. Perhaps DCLG should consider evaluating its processes using the Open Data Maturity Model, developed by the ODI and already in use in more forward-thinking areas of government.

Query emails with ONS and DCLG