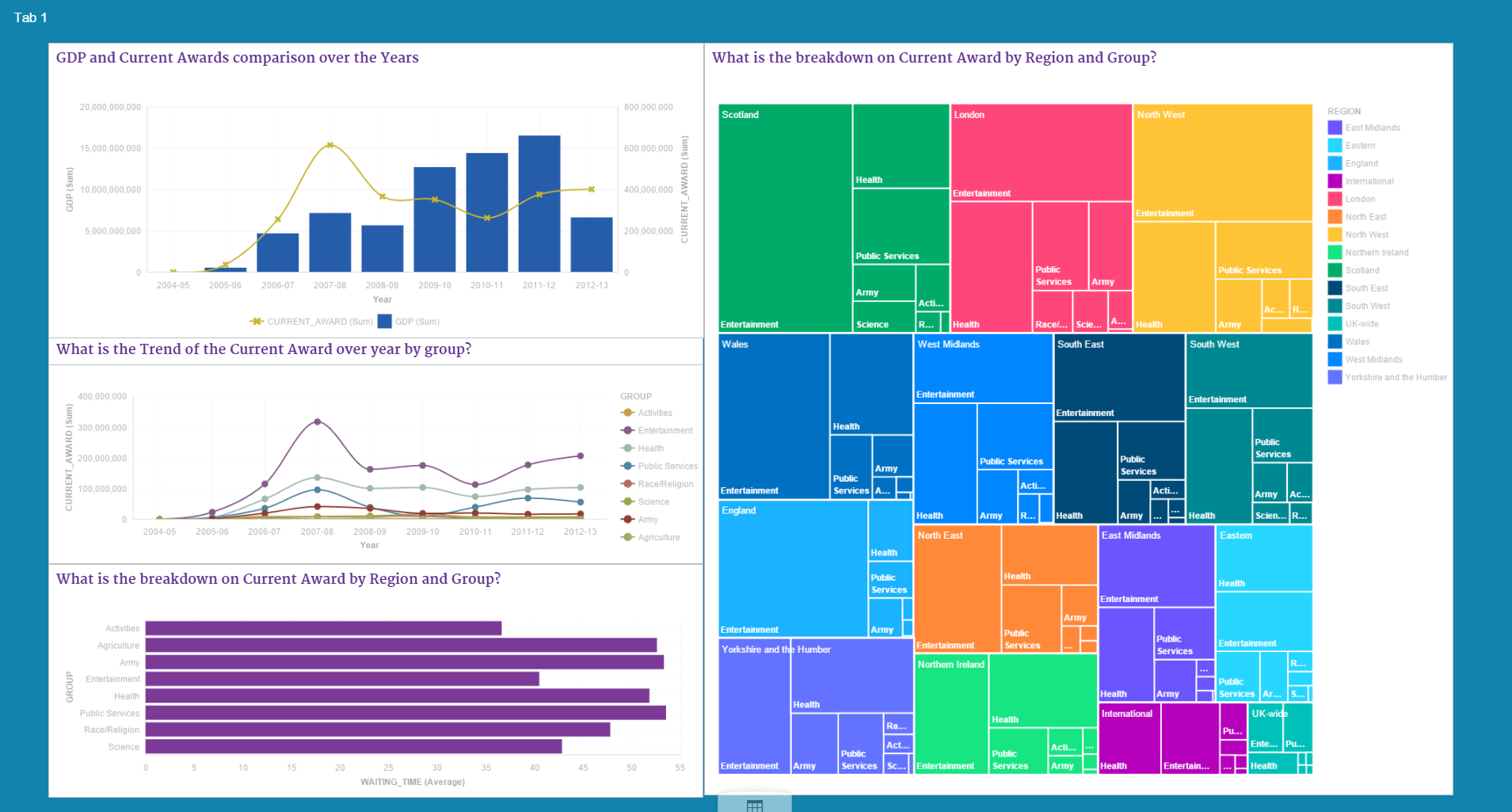 Here at AAM Associates we’re exploring how various data sources and approaches can be used to drive social impact.

Earlier in the summer we supported a short open data project with London South Bank University and the Big Lottery Fund, who recently released nine years of their funding data, totalling some £6bn. The assumption was that this information will be useful for lots of civil society organisations – to see spending priorities by theme and region, for example.

However, we also wanted to see what value it may have for the Lottery itself, so London South Bank University’s Informatics Department used this data to set a task for first-year informatics students, as part of their end-of-year assignment.

The task was to create a dashboard (using IBM Watson Explorer) of value to the Lottery. This very broad brief turned up some interesting results. Walking around the groups as they presented, three main things struck me about the value of even such a short exercise:

The Lottery usually – and quite sensibly – present their data on money spent by programme. However, one student group looked at things in an entirely different way.

They noticed that each line of data also contained the full text of the media release that accompanied the announcement of each new funding agreement. They pulled in this text, built a new dictionary around it, and presented the totals as new ‘themes’ (agriculture, health, activities, etc). This of course enabled oversight that cut across a range of programmes.

While much more work would be needed to hone such findings (for example, text references to press releases or use of video might suggest ‘entertainment’ as a category, when the associated programmes are nothing of the sort), but it was instantly apparent how useful such a challenge to existing thinking and assumptions might be. Further similar analysis, for example, might suggest links between programmes that had not previously been identified.

This potential for fresh thinking is part of the reason why the Lottery released this data in the first place, which is a refreshing approach and one that other funders should now emulate.

The power of linked data

It will come as no surprise to learn that the most interesting findings came when the Lottery’s data was overlaid with other data sources. One student group aligned the amounts invested yearly with GDP, for example, and were fascinated to start exploring how the two correlated.

Perhaps the greatest immediate value to the Lottery, however, came from one student group who aligned the Lottery data with constituency boundary data. It emerged that the Lottery are contacted on a regular basis by MPs and other local political influencers wanting to know details of the amount and type of programmes supported in their patch.

Rather than asking a data team to pull off such data and send it to the enquirer, having a platform in place to do such a thing automatically – and perhaps driven by the person making the request – was obviously of interest as it would deliver both an enhanced user experience and a more efficient and cost-effective system.

The power of partnerships

Perhaps the greatest challenge the students faced was in coming up to speed with the focus and aims of the Lottery; they did remarkably well in such a short space of time. This highlighted an area that for me needs more work – the convening of more social sector data partnerships

We need more civil society organisations to find ways to share their data, to provide the basis of useful experiments. The three corners of a potentially powerful data triangle would be:

1. Civil society organisations – who can provide whatever data they may have, highlight which problems are most pressing and add valuable context to the issues in hand.

2. Open data providers such as the London Datastore – whose data can provide many more levels of context to help unearth insights.

3. Universities – who can provide the infrastructure and skills to analyse, explore and find value.

The civil society organisations receive data analysis that they could probably not afford. The open data providers get more people looking at and applying their data in socially useful contexts. The universities get real-world problems for their students to grapple with, and more evidence of how they are helping to drive real social impact.

It will be interesting to see how more partnerships such as this are brokered in the coming years.

Many thanks to the excellent Nigel Phillips from LSBU, and the very supportive Simon Marshall from the Big Lottery Fund. Hat-tip also to the energetic 360Giving team – and especially Will Perrin who came along to judge the entries – for pushing hard for a wide range of funders to publish their data.