↓ Skip to Main Content
Home › Benefits of open data › Google at NTB and KLL: Collaborating for an Open Data Paradigm in Nepal

Google at NTB and KLL: Collaborating for an Open Data Paradigm in Nepal

Google at Nepal Tourism Board and Kathmandu Living Labs: Collaborating for an Open Data Paradigm in Nepal 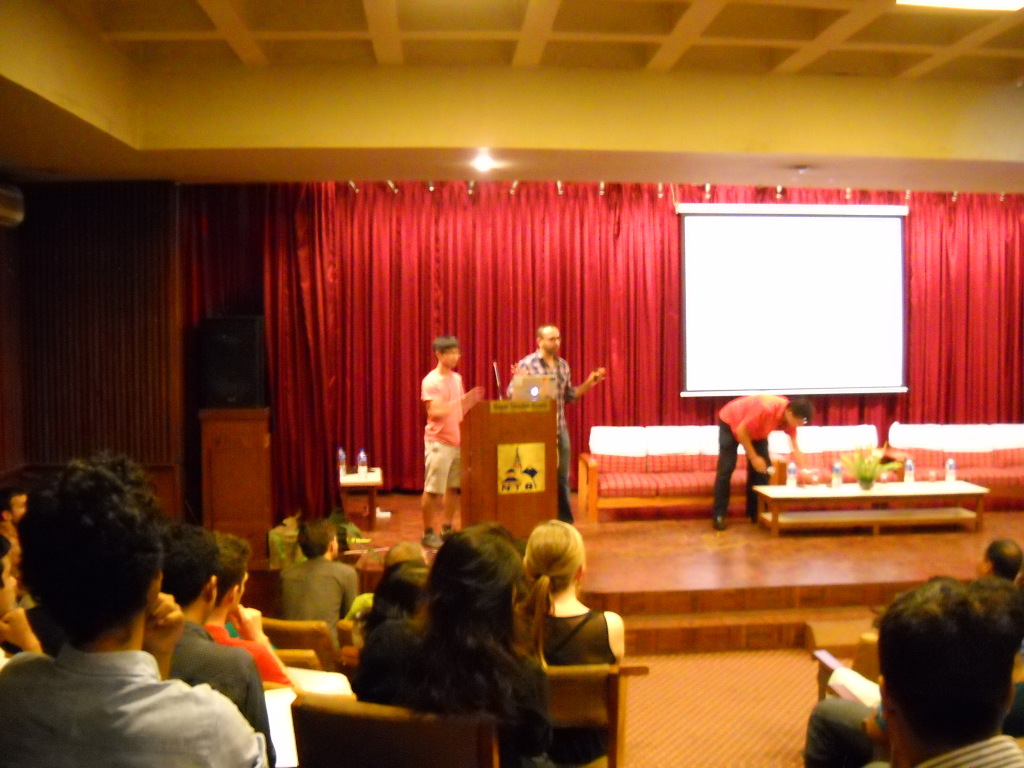 Just Google it! Now a pop culture reference point heard throughout the world, this phrase also defines the hyper-connected, continuously-innovating world of peer-to-peer technology. Google was here! Kathmandu is currently in the throes of recovering from the earthquake of April 25, 2015. Amidst the recovery process and rubble, a team from Google, somewhat serendipitously, has been working with NGOs in Kathmandu on critical post-quake issues.

Presently, Kathmandu Living Labs is collaborating with Sumier and Chris from Google on an Open Data Project at the National Planning Commission. From the company that institutionalized “hangouts,” the Google Meet on July 28 at the Nepal Tourism Board, which drew from the team’s insights, experience and vision, was interaction design 2.0. The Google Team started their trip to Nepal with the Startup Weekend in Kathmandu where they came up with product ideas to benefit disaster relief here. The group of 18 Googlers then split up into teams to begin work on various NGO projects. Following this, the Tech Talk at NTB on Tuesday was organized for the wider entrepreneurial community.The team has met with local tech companies such as Leapfrog Tech over the course of their work. Sandip Agrawal, Software engineer for YouTube, and Ethan Yake, Partnerships Officer at All Hands Volunteers, helped organize the NTB event.

Google has been at the forefront of disaster response with its Crisis Response Tools, Disaster Gift Matching Campaigns and Google.org Corporate Grants. When a disaster strikes, Googlers have been interested in supporting not only their generous dollar donations but also their valuable time. As a result, Google launched the Google Disaster Corps (GDC) program in 2015 – a philanthropic Human Capital Investment Program in Disaster Relief. GDC is designed to meet urgent technical needs of relief agencies and to match these with Googlers interested in volunteering for disaster relief, providing critical support to relief organizations during the response process.

The Google Tech/ Entrepreneurship Meet was planned as a set of talks and a 45 minute Q&A panel discussion by Googlers which centered around presentations and discussions on User Experience Design, Tech 4 Emerging Countries and Techno-preneurship in a world not only driven by innovation but also ridden by problems of every scale. Members of the Google Team in Kathmandu are working with organisations such as Mercy Corps, Accountability Lab, Save the Children, Room To Read and the United Nations. The panel discussion with the Googlers in Kathmandu comprised a dialogue with audience members covering varied, cross-sectoral insights on the engine for innovation that is Google; perspectives on tech development, design and sprints and growth opportunities for tourism and tech in Nepal.

The presenters at NTB demonstrated, yet again, that tech for sustainability is a core necessity of the time. Chris is part of the Design Team for Google Chrome and has majored in Computer Science and Human Computer Interaction from Carnegie Mellon University. He has been with Google since he graduated. Sumier has a Master’s in Information Design from the Georgia Institute of Technology and is part of the UX Team – he works at CorpEng and Internal Tools for Google. Their Google Meet presentation at NTB was entitled ‘UX for Entrepreneurs’. Scot is Partner Operations Manager at Google and his presentation was titled ‘Growing a Company from Emerging Markets to Developed Countries’.

Chris and Sumier’s talk on UX for entrepreneurs harnessed their collective insights on user experience, design-driven products and design sprints. From generating audience feedback on the design of a Weather App to presenting Google’s essential design philosophy of the user experience, the speakers delved into the process, research, design and evaluation of UXD. (The Google user interface must certainly be streamlined and crash free now!) Introducing the design sprint concept, the presenters engaged the audience thoroughly in what was, surely, every developer and entrepreneur’s life cycle analysis of choice. “Nothing is a mistake. There’s no win and no fail. There’s only make.”

Scot’s presentation refocused attention on a pressing need in the region – sustainability and technological solutions for critical problems faced by the Developing World. As a case study and prototype, he presented on a clean energy project he worked on with One Earth Designs in China. A solar cooker named SolSource, developed in China with local know-how as well, served to remind that while current advancements in technology are often beyond the reach of many, these are part of an emerging philosophy of a social, environmental and financial support system which merges ideals of people, planet and profits.

Currently at KLL, Chris and Sumier are working to make the UNDP/NPC Human Development Report data more accessible to citizens and NGOs for both mobile and web interfaces – in summary, a UX Design for the Nepal Human Development Index jointly produced by the United Nations and the National Planning Commission of Nepal. Key data elements from within the HDI that are part of the UXD include health, income and education indicators such as adult literacy, life expectancy and per capita income.
The KLL team working with the Googlers on the NPC Project are particularly motivated by its scalable, modular and visual aspects. Aakash Sigdel is a Front-end Developer at KLL and has majored in Computer Science and Engineering from Moti Lal Nehru National Institute of Technology in Allahabad. Pratik Gautam is a GIS and Front-end Developer and Designer at KLL and has majored in Civil Engineering from the Institute of Engineering, Pulchowk Campus.

Translating and visualizing Nepal Human Development Data, collected via the Central Bureau of Statistics, onto a mobile-friendly interface which will be embedded in the NPC website is a system architecture collaboration with Google that has virtually no precedent here. Large volumes of information from UNDP/NPC Reports are currently being designed at KLL, location and sector wise, for searchable usability and accessibility – with maps, colours for comparative analyses, charts, search functions, filters and a responsive visual standard, this is a conceptual design exemplar.

According to the Googlers, the UX design, techniques and code generated at KLL can also be re-used as a data framework and model for other data visualization projects. This would mean opening up data in other sectors in Nepal such as infrastructure and transportation. Chris is keen to see the tourism sector in Nepal become more data savvy with accurate and relevant information readily available in support of both a steady influx and sustainable growth.

In post-quake Kathmandu, Sumier sees a viable drive to create start-ups that solve critical problems and challenges facing the rebuilding and recovery processes. Technology functioned as a vital tool and enabler during the emergency relief efforts in Nepal and remains very relevant for coordination among citizens, sectors and agencies. In terms of gaps and issues, Chris further opines that the role of technology in Nepal extends to economic growth as well whereby Kathmandu’s budding start-up community could lead the shift towards an open, innovation-based, entrepreneurial economy. Kathmandu’s entrepreneurs and ideators could shape the process and leverage the design for change and problem-solving idiom. Taking Quakemap’s example, Sumier also brings in the crowd-sourcing dynamic that is fundamental to solutions-based coordination among NGOs and civil society for post-disaster assistance and resilience.

Kathmandu Living Labs is a non-profit technology solutions organization harnessing local knowledge in support of an Open Data ecosystem in Nepal. Part of a growing, global OSM Community, KLL works towards the successful implementation of Open Data platforms, practices and methodologies that help solve day-to-day civic issues. With significant experience and outreach in many parts of Nepal and a diverse range of organizations, KLL was at the forefront of disaster information management during and after the Nepal earthquake of April 25, 2015.