A guest post from local open data expert Mark Braggins originally published on data.gov.uk The post provides an excellent overview of some of the innovative open data work underway in our region.

In my previous post I argued that a combination of ‘chance’ and open data can lead to good stuff happening. I supplied a few examples, and also mentioned ‘engineering serendipity’, where ‘chance’ is given a bit of a boost.

In this post, I’m going to rattle through a few updates, and introduce a couple of new examples.

At BlueLightCamp in May 2014, Chris Cooper – co-founder of Know Now Information – came up with the idea to use open data to try and predict when and where flooding might occur in future.

Know Now have been working with the Science and Technology Facilities Council (STFC) at Hartree, and have created Flood Event Model, which has proven – with 85% accuracy – that open data from a wide variety of sources can be used to predict the precise location and time there will be an impact on human lives.

This means that emergency services can be forewarned, before an event takes place, giving them time to take action e.g. closing affected stretches of road, putting in place diversions, warning householders, and positioning resources where they’ll be most effective. 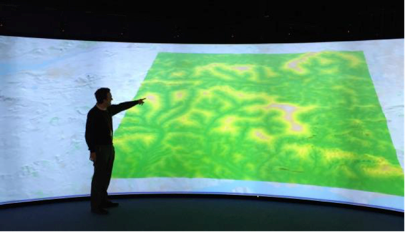 Making sense of the data – one of the visualisations from Flood Event Model, based on open data for Hampshire

Flood Event Model is still ‘just’ a model, however, and the next steps will include workshops in Hampshire to look at the practicalities of integrating it as a service into an operational environment. I’m pleased to be working with Know Now on that.

Footnote: Just spotted this article in the Financial Times, written by Clive Cookson, and also this press release by STFC.

Back in my Hampshire Hub days, I helped instigate an initiative called Crowdsourcing Landscape Change (CLC). It’s a partnership between Remote Sensing Application Consultants (RSAC), the University of Portsmouth, and Hampshire County Council, with support from InnovateUK. 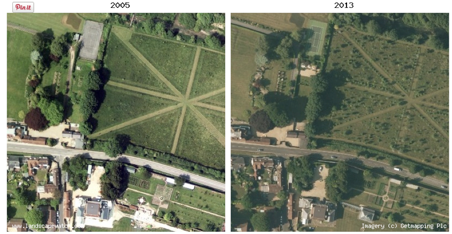 Basically, CLC uses two sets of aerial photographs – from 2005 and 2013 – and asks people to ‘spot the difference’ between two snapshots of the same location. Once you’ve registered, you can pick a square, or have one selected for you. There are some simple choices to make about what’s changed, and any differences you identify are captured as data (which will subsequently be released back into the wild as open data). For those who like a bit of healthy competition, there’s a leaderboard, and there’s also a forum where you can discuss what you find.

●it can help inform us about the changing landscape

●people are creating new data,which is being shared back with them again as open data

There’s more information on the Landscape Watch Hampshire web site, which is now ‘live’. Please give it a go – even if you aren’t in Hampshire – every observation gets added to the pot and adds value.

Another example from Hampshire is the work that the Geodata team at the University of Southampton has been doing with Aerial photography. This is another of those ‘unanticipated benefits’ that I was banging on about about earlier – basically councils in Hampshire released the images and data with an open licence, and Geodata have done some amazing stuff with it. Geodata created the Hampshire Data Portal, which lets you select and download aerial data in a variety of formats, and also lets you explore in 3D. It’s not finished yet, but I couldn’t resist mentioning it here.

One of those which I mentioned previously is the map created by Chris Gutteridge and Dr Ash Smith. Amongst many other things, it includes food hygiene and transport open data, which helps students and staff find out which pubs and restaurants are on well-served bus routes.

Well, Chris has been at it again, this time using open data to create a model of Ventnor (Isle of Wight) in Minecraft. Simon Perry from On the Wight covers it nicely in his article: Minecraft Ventnor: If you know a Minecraft fan, this will blow their minds, and Chris’ site is:http://ventnor.totl.net/

Actually, it was Chris and Ash’s work which first connected me with Sian Thomas from theFood Standards Agency (publishers of Food Hygiene Certificate open data), and led to Sian joining the organising team for Open Data Camp.

Open Data Camp – the first unconference in the UK devoted entirely to open data, took place in February 2015. By most accounts, it went rather well, and lots was written about it.

Over 150 people made it to Winchester over the weekend, despite the rail replacement bus service in place both North and South of Winchester!

We originally envisaged there’d be a hack as well as the unconference, but people ‘voted with their feet’, and it turned out to be predominantly unconference as there were so many interesting sessions. 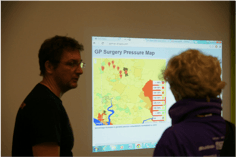 That’s not to say that no development at all took place at the weekend: Nick Allott of Nquiringminds (one of the sponsors) was hard at work creating GP Pressure Map, which uses open data to identify which GP surgeries will be most under pressure by 2020.

It attracted lots of interest, and Nick was later interviewed about it for BBC South Today.

Overall, Open Data Camp went so well that everyone just assumed there would be another one. Whilst Winchester was a great venue, we all agreed that the next one would be “up North”, which brings us on to our very own Northern Power…Camp:

Happily, the ODC organisers are dispersed across the UK, and Jamie Whyte is well-placed to lead the next event. Jamie runs Trafford Innovation and Intelligence Lab, and is well-connected with the open data and innovation community in-and-around Greater Manchester.

All of the original team are of course still involved, and this time we’re also being joined by Julian Tait of Open Data Manchester, and Vimla Appadoo of SpacePortX, who bring their own knowledge and local expertise.

At the time of writing, there are a few tickets left, but you’ll need to be quick as they’re going fast.

I’m particularly interested in any stories involving open data for a new venture (which will be the subject of my next post).