Created automatically from RSS feedPosted on July 13, 2015 Posted in Benefits of open data, Innovation, Posts from feeds
This post was created automatically via an RSS feed and was originally published at https://www.data.gov/meta/get-local-data-build-apps-win-the-national-challenge/

Earlier this summer, the U.S. Census Bureau announced the “City SDK Open Data Solutions Challenge.” This challenge is now in the homestretch with submissions accepted through the end of July, encouraging developers to use the Census Bureau’s new City Software Development Kit (SDK). Challenge finalists will have the opportunity to demo their apps to the U.S. Department of Commerce Chief Data Officer, Ian Kalin.

Since the CitySDK’s initial launch during the National Day of Civic Hacking on June 6th, momentum has been building with new and compelling uses of open data rolling in on a weekly basis.  Teams in cities across the country used the CitySDK to deliver software that produces social good in their respective communities.

For example, at the Chicago location of the National Day of Civic Hacking, teams were hosted by the Center for Neighborhood Technology and focused on sustainability issues.  Participants were able to demo their apps to U.S. Chief Data Scientist DJ Patil, followed by a pitch session in the afternoon to a panel of judges.  The top two finishers in Chicago are highlighted below.

Purshable is a social good start-up that wants to revolutionize how grocery stores connect with consumers.  They used the CitySDK and Census geocoding features to help match stores with consumers to get access to perishable goods at discounted prices. 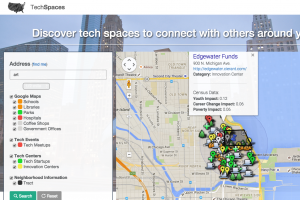 One of the key capabilities that the CitySDK offers software developers is the ability to prototype web applications in a matter of hours instead of days.  Coders can leverage  open data assets from federal and local sources to create applications for social good and also to explore new business opportunities.

The current set of CitySDK integrations include participation from Census, HUD, USDA, Department of Energy, Socrata, ESRI, Leaflet JS, Microsoft and others, and is completely open for any organization to scrub into the project and help make data easier to use.     Finally, be sure to explore the local data sets available on your city’s open data portal as well as Data.gov.  If your city is not already listed on Data.gov, be sure to reach out to your city’s open data contacts and request it be added.

How to Get Involved

Teams across the nation are invited to participate in the “City SDK Open Data Solutions Challenge.” To get started, visit Github and walk through a series of interactive examples that use the CitySDK, or attend an upcoming City SDK webinar.   Finalists of the CitySDK Open Data Solutions Challenge will have the chance to demo their app to Department of Commerce Chief Data Officer Ian Kalin.