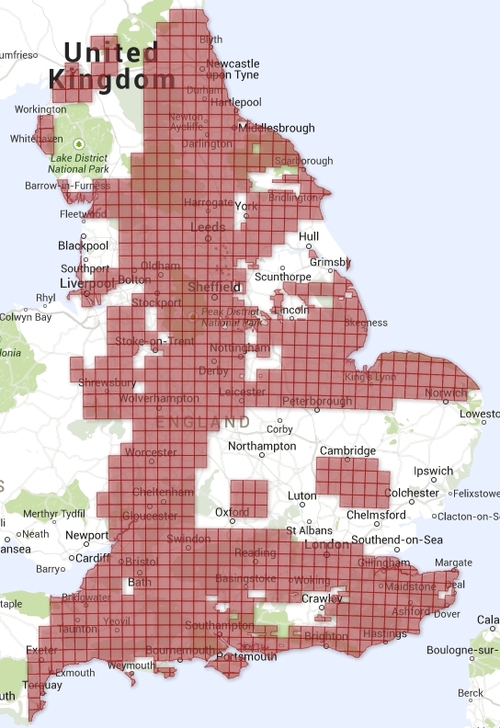 Updated 15 February 2015 with an additional map related to flood risk. See the end of the post.

There is a lot of interest in “fracking maps” at the moment. Rules for shale gas exploration in the UK are under debate as the Infrastructure Bill goes through Parliament.

The Government seems to have accepted a Labour amendment to ban fracking in National Parks, Areas of Outstanding Natural Beauty (AONBs) and Sites of Special Scientific Interest (SSSIs). There are also discussions about banning fracking in Groundwater Source Protection Zones (SPZs), although its currently unclear how those areas will be defined for the purposes of the Bill.

Last week the Guardian and Greenpeace separately published analyses of the effect of those amendments on the blocks offered for the 14th Round of onshore oil and gas licensing. Friends of the Earth also have a map that effectively visualises the various layers of data.

The Guardian calculated that the proposed bans would reduce the land available in England for future shale gas drilling by 39.7%.

I’ve had a go at duplicating those results using available spatial data, by subtracting the combined areas of the National Parks, AONBs, SSSIs and SPZs from the licensing block polygons. According to my calculations the available land would be reduced by 39.0%, basically the same as the Guardian result. (There are a number of slightly different ways of calculating geographic area, i.e. Cartesian vs spherical.)

I’ve made an interactive map to show the effects on the licensing blocks of subtracting the National Parks, AONBs, SSSIs and SPZs.

These are the unamended 14th Round licensing blocks:

These are the same blocks with National Parks, AONBs and SSSIs subtracted:

These are the same blocks with the further subtraction of all SPZs:

Most of the relevant datasets are open data: DECC has released the licensing blocks, and Natural England has released spatial data for National Parks, AONBs and SSSIs.

Data for Groundwater Source Protection Zones (SPZs), maintained by Environment Agency, is unfortunately not available for reuse under an open licence. However there is a good presentation of the data on EA’s own mapping site. There are different types of zone and it’s debatable which (if any) are of direct relevance to risks associated with fracking and shale gas exploration.

I’ve added a new visualisation showing the proportion of each 14th Round licensing block that is on the floodplain.

I calculated the percentages based on the spherical area of each block that overlaps with Environment Agency’s Risk of Flooding from Rivers and Sea spatial data. RoFRS shows all locations with a chance of flooding of 1 in 1000 (0.1%) or higher. (However note that the model does not include groundwater risk.)