Flooding & WUDoWUD. What’s in a name? 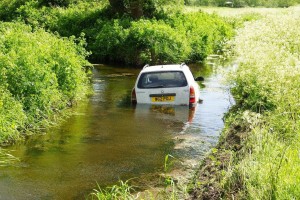 This is a guest post, written by David Patterson of Know Now Information, about the Whether You Do or Weather You Don’t (WUDoWUD) initiative. It was originally published on the Know Now blog.

Our WUDoWUD project has seen significant progress over the last few weeks thanks to the tireless work of the team from the STFC and IBM.

Our approach to the project has been to use historic data to help predict which areas would be susceptible to future flooding events. In particular we look where cars pass through fords in the road either getting the occupants stuck in their vehicle or causing secondary flooding for households as the bow wave from the car overtops local flood defences.

Development has been going very well at the STFC’s Hartree Centre. I was privileged to attend a demonstration of progress so far last week and will be travelling to their site to work alongside them from Wednesday to Friday this week.

Particularly thrilling for me was the opportunity to see the datasets and predictive models visually represented on the large format 3D screen. The attention to detail that the team have put in, the level of expertise they have applied as well as the ideas to deliver further are very welcome indeed.

A week last Friday I attended a meeting about Flood Resilience hosted by the Environment Agency in Bristol alongside Mark Braggins from the Hampshire Hub. We were talking about the WUDoWUD solution and how it provides real time predictions for Flood Events in Hampshire.

Around 100 people who manage flood situations and emergency response were present and the presentation seemed fairly popular. It seems that the model we have created is very similar to that used by the environment agency but more hyperlocal and at a fraction of the cost. It should prove to be really useful for local communities and local authorities to take action to prevent damage and protect lives.

Over the next few weeks we will be creating a front end which will allow people to run their own predictions and queries on the datasets and potentially provide some mapping so that people can see whether they are likely to be affected by a flood related event.

We will also this week be trying to get as much of the solution running on IBM’s Bluemix platform as possible. This will give us a fast development capability and allow us to concentrate on increasing functionality rather than worrying about the individual services that allow WUDoWUD to run properly.

The aim then will be to create a method that will allow for deployments in other UK counties or even other locations around the world. At the same time we will also be looking to augment the capability by introducing more datasets, for example satellite imagery, and tailoring the output for further use cases, such as looking for silting in rivers.

It is likely that as we approach commercialisation of the solution that we will look to change the name from WUDoWUD. It is a name that has served us well in development and created a talking point. It might not however be wholly appropriate for an enterprise class emergency planning tool! No name has yet been chosen but it is likely to be along the dour but functional lines of “Real-time flooding impact analysis tool”. Any better ideas that you may have will be really gratefully received!

I look forward to bringing you news of when WUDoWUD, or whatever it might be called by then, will be finally launched!