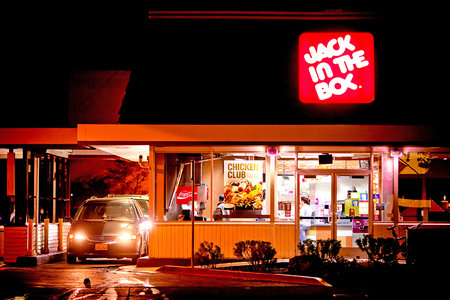 No one thought about data standards when the Jack in the Box E. coli epidemic erupted in 1993. Instead, there was panic as the stomach-clenching illness engulfed more than 700 victims across California, Washington, Idaho and Nevada. The strain of bacteria, transmitted through undercooked beef patties, left more than 170 with permanent kidney and brain damage. Most of these were children, and tragically, four died as a result.

“I’m a two-time E. coli survivor,” Schacht recalled. During the Jack in the Box outbreak, she contracted the disease at the age of 13 along with her 5-year-old brother. And in 2013, she was diagnosed yet again after dining at a Seattle restaurant.

Schacht’s encounters now serve as driving forces as she campaigns to fight food-borne illnesses with data. In an attempt to cultivate what may amount to a digital vaccination, Schacht is pioneering what’s known as the Local Inspector Value-Entry Specification (LIVES) standard. The program — started in 2013 as a public safety venture between San Francisco, Socrata, Code for America and Yelp — has turned into a national movement by cities to educate consumers through easily interpretable food inspection data.

With most food inspection information too raw and convoluted for average citizens to digest, there’s a real need for a unified system for alerts. The U.S. Centers for Disease Control and Prevention (CDC) conservatively estimates that each year, about 48 million people — or one in six Americans — are infected with food-borne illnesses. Within this group, 128,000 are hospitalized and 3,000 die. Often diners are left to bear the brunt of both the health and financial consequences. Schacht said during the Great Recession, many restaurants cut costs by downgrading their liability insurance. It was a practice she witnessed first-hand in her second E. coli incident in Seattle when, after filing a joint lawsuit against the restaurant, she watched the establishement shut its doors and claim insolvency. By the end, Schacht was left with more than $30,000 in medical bills — and this excludes ongoing physical therapy treatments.

A single standard would alert consumers immediately about potentially hazardous restaurants and enable health comparisons city to city. In Toronto, Canada, Schacht said after two years of publishing inspection reports, that visibility led to lowered food-borne illness incidents by as much as 30 percent. She added that, on average, restaurants complying with food inspection standards show a 5 percent increase in revenues.

The Local Inspector Value-Entry Specification (LIVES) open data standard for restaurant inspection information represents an opportunity to scale the standard across governments and facilitate citizen education on food safety standards. LIVES has successfully met with eight major metropolitan areas that have been using LIVES over the last two years.

Socrata has built the LIVES Access Program (LAP) to deliver a smooth process that requires minimal staff time to take existing restaurant inspection data and produce it in LIVES, making it available through an open data portal and facilitating the presentation of this data in restaurant information sites like Yelp.

LAP will provide up to 22 Socrata clients a structured, supportive cohort environment, where their team will learn how to implement LIVES and can leverage support from Socrata’s Customer Success and Ecosystems teams while launching their LIVES data.

Sign up for the program by filling out the online form here.

Provide citizens accurate, timely and readily accessible restaurant inspection information on an expanded range of restaurant information services.
Engage in public health and food-handling education, where citizens are naturally gravitating toward restaurant and food information.
Provide staff experience in coordinating and launching data in a standard format.
Recognition from national public health and local media.
Opportunity to participate in peer-reviewed research on LIVES public health outcomes.
Learn from and build relationships with peer governments around the world.

Cohorts will run over the course of two months, allowing clients to space out work and stakeholder engagement. The cohorts are based on a successful model from Sweden.
Less than 40 total staff hours (split between public health and IT staff) will be needed to complete the launch of LIVES data.
Three one-hour Google Hangout training sessions per cohort.
Two 45-minute one-on-one guidance sessions per government, per month.
Last three weeks include testing of data, review and integration into Yelp.
Start dates: July 18 and Aug. 1, 2015. All cohorts wrap by Sept. 30, 2015

LIVES aspires to replicate such results through open data by educating consumers through its nationally suggested 0-100 rating system and violation listings. Most notably, it’s been popularized by Yelp, which has placed the ratings right next to user reviews. The scoring, which can also be harnessed by civic developers, is a progressive first step — although it has experienced setbacks as it tries to mold itself on top of a diverse topography of food inspection methods.

Despite 15 government entities monitoring U.S. food supplies, there’s no required federal standard. The CDC and the U.S. Food and Drug Administration (FDA) only provide general guidelines that have compelled cities and states to craft a cornucopia of their own evaluation metrics. Some score restaurants with numeric methods, others use alphabetized grading, many dress scores in color-coded labels, while still others opt for pass-fail assessments. Some might be surprised to learn of Schacht’s research, which says 60 percent of cities don’t operate with any rating system at all and prefer violation lists instead.

Against the disparate backdrop, skeptics may conclude a single rating system improbable, if not impossible. Yet Schacht and her public- and private-sector advocates still see an opening, one that rests less on broad measures and more upon minutia.

In Albuquerque, N.M., Mark Leech frames the regulatory landscape with a frontlines perspective. As the city’s application development manager, Leech couldn’t be more removed from a government-as-usual mentality. He collaborates with the Albuquerque hacker community at Code for Albuquerque, has served as a resource for Albuquerque’s 2015 Code for America Fellowship program and — as his Twitter account attests — is a devout advocate of government transparency.

When it comes to Albuquerque’s unique food inspection ratings, however, Leech says little can — or should — be done.

“We have a pass-fail food inspection rating,” Leech said. “And the interesting thing is that there is actually a mandated ordinance for us on this. So it’s not about business policy or anything like that — this is what the ordinance tells us to do.”

The Albuquerque Environmental Health Department delivers green passing or red failing stickers to restaurants post-inspection. Restaurants can still operate under failed inspections as long as they remedy issues and schedule a new review within five days. Leech says citizens chose the rating because, while not as nuanced perhaps as a numeric grade, pass-fail immediately communicates safety at a glance.

“I just think it’s a lot easier to see when I’m going through a restaurant’s door whether it’s got a red or a green sticker on it,” Leech said.

Still, Albuquerque was the fifth jurisdiction to sign up for the LIVES standard, translating its pass-fail results into a “0-or-100″ score in LIVES. It’s an imperfect solution in what the city sees as a viable, yet evolving, standard.

“Really what we’re finding right now is that it’s a great idea, everybody is interested with it, but now what does it take to make it work?” Leech said.

In Albuquerque’s view, Leech said they see themselves more as data suppliers than data curators, metaphorically akin to a lumber company than a maker of wooden chairs and tables. The point, he explains, is that whether the city’s LIVES data is used by Yelp or a single community project, the drive is to turn data into a resource for a wide range of consumers — entities like businesses, nonprofits, internal government users and citizen groups.

“As far as we’re concerned,” he said, “we’re just putting it out there, and whoever wants to use it can use it.”

Diving from the panoramic 0-100 rating to a more in-the-weeds approach, Schacht said she’s working with Yelp on an update expected to open LIVES to the more than 60 percent of U.S. cities that lack scoring systems. The new judging criteria won’t eliminate the 100 score, but separates critical and noncritical violations into two columns, with critical violations — those likely to produce illness and close restaurants — red-flagged for diners.

The update also couples reviews with the background behind their evaluation processes. Schacht explains that food inspection scores are sometimes tricky to interpret. Unlike academics, a 70 rating in one city isn’t necessarily equal to a 70 rating in another jurisdiction. In fact, it could even translate to failure. Alterations like this and city health department links for reporting, Schacht said, will be just some of the new additions. A spokeswoman for Yelp said they don’t yet have an official comment on a preferred rating system.

As a viable pairing to the LIVES data standard championed by Socrata and Yelp, there are a number of app developers in a race to be the national source for food inspections. “What the Health” and HDScores are two notables among these. Using jurisdictional data, the two have created their own scoring systems to strategically side step the complicated city-by-city and state-by-state grading variations. The move has empowered each of the apps to scale rapidly.

What the Health, which offers both letter grades and 0-100 scores for restaurants, is available in 10 states, mainly on the East Coast. HDScores delivers scoring via percentages, and is in 27 states, as well as jurisdictions in Canada and the United Kingdom.

Something both apps share is that they are still highly dependent on open data. This realization was one of the first concepts former chef and HDScores CEO Matthew Eierman grasped when he bootstrapped his startup a little more than three years ago. Other realizations involved a critical need to retain data fidelity through backlinks to original government reports and that the value of food inspection data correlates inseparably to its timeliness — all characteristics requiring government support as open data suppliers.

Today HDScores has created a database of more than 615,000 inspection reports integrated into its app.

“Our HDScore scoring system took a year to develop with the help of chefs, sanitation experts, data scientists and engineers.” Eierman said. “We do not have a national system, but a repeatable jurisdictional system that compares and unites all [restaurant] establishments against every establishment in a single jurisdiction — a true apples-to-apples comparison.”

This collective effort to raise awareness for food inspection safety — with civic tech startups, citizens, government and standards facilitators in the mix — might foreshadow what’s coming as jurisdictions embrace open data initiatives like LIVES and app developers deliver the information to consumers. Ultimately, however, Schacht said the overarching goal is to create a database so permeating nationwide that its value and use are self-evident. On Aug. 1, city officials are invited to join Schacht in Socrata’s free LIVES Access Program for a two-month-long set of tutorials on data launches via Google Hangouts.