An unexpected encounter in the Andes

Our Chilean journey came to an end four days ago, and we are now having a quick side-trip further south, in Argentina’s lake district. We didn’t think we’d have anything to report from this section of the trip, but sometimes travel surprises. We will summarise our week of research in Chile tomorrow, but today, we will tell you about an unexpected open data experience in San Martin de Los Andes.

San Martin de Los Andes is a small, beautiful town in the district of Neuquén, Argentina. It is well known for its stunning views of Lake Lacar, chocolate stores and ski resort. In the summer time people visit its beach or stay overnight after finishing the great tour of the seven lakes nearby. All in all, it’s a ‘tranquilo’ place, as locals say. Therefore, it was a perfect choice to relax after a busy 10 days in Chile. Open data and civil society groups are hundreds of miles away in the big bustling cities of the north-east. It is not much known for political activity, besides playing host to Che Guevara during his formative Motorcycle Diaries road trip.

Except that last night, the manager of our apartment complex, Pablo Saad, asked us casually about our upcoming work in Buenos Aires. “Open data research”, we answered, as we have done so many times before. What often follows in these situations is a rather blank expression, but Pablo’s reaction was surprising. “I love open data”, he said, with a spark in his eyes. “I did some analysis of open data policies in Argentina not a long time ago. It’s good to meet someone from outside of Argentina who is doing these kind of things!”

And so, with Mor’s broken Spanish, we had a spontaneous interview. We learned that Pablo is a member of a local organisation named ‘San Martin de Los Andes Como Vamos’ (‘How are we doing’ directly translated), which is part of ‘Red Ciudadana’ (‘civil network’), a network that stretches across six other cities, each of them much bigger than San Martin. The organisation promotes the strengthening of democratic processes and participation in the city, and its themes include open data and freedom of information. Pablo himself told us that he wished that Argentina would have as strong a transparency law as the Chilean one that we had heard so much about during our week in Santiago. He said that while the federal government has no such law, but he knows that other regional and municipal government do, even the municipality of San Martin. The problem, however, was not the bill, but the personnel – none of the employees in San Martin has the specific responsibility to execute such a policy. “We don’t have money for this, and money is important when it comes to training.”

The distance of San Martin de Los Andes creates another challenge as well. It is far from civil society centres in Buenos Aires, Santa Fe, Cordoba and Mendoza. “We have a website”, said Pablo, “but we don’t have the knowledge to create more than that. We need remote help when it comes civil hacking, like in creating local open data portals.” Networking, so it seems, still needs a face-to-face touch. Pablo hadn’t come across groups like Hack/Hackers  or Congreso Interactivo, not to mention other international groups. While his knowledge in the differences between different municipalities’ openness levels was very broad, he didn’t know any of the big networks aside from Red Ciudadana.

This leads us to think – how can you innovate in open data when you are on the periphery of networks, both geographically and politically? How is it that, in the Internet age, people are still not able to connect with peers in the centre, even though they have the technical infrastructure to do so? What does this mean for the international open data community, and what, if anything, can we do to make it better?

Maybe, we should be a bit like Che Guevara (cheesy we know, but follow our line of thought here for a moment). Maybe its time to ditch the laptop for a bit, pack a bag full of listening capacity and good faith, and start to explore these small communities who want and need innovation as much as everyone else, but don’t have the depth of resources and know-how to do so. Sometimes, it seems, a chance, face-to-face meeting in a local community can teach you so much more than just a Google search. We’ll have more to share from our Open Data Diaries very soon. 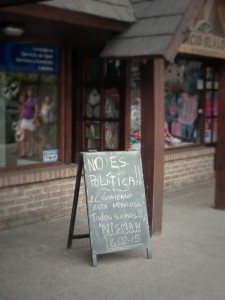