A Visualization of World Cuisines 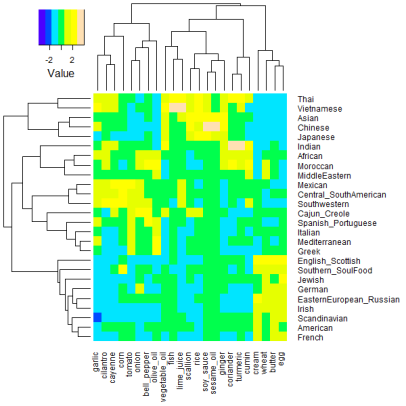 (This article was first published on Design Data Decisions » R, and kindly contributed to R-bloggers)

In a previous post, we had ‘mapped’ the culinary diversity in India through a visualization of food consumption patterns. Since then, one of the topics in my to-do list was a visualization of world cuisines. The primary question was similar to that asked of the Indian cuisine: Are cuisines of geographically and culturally closer regions also similar? I recently came across an article on the analysis of recipe ingredients that distinguish the cuisines of the world. The analysis was conducted on a publicly available dataset consisting of ingredients for more than 13,000 recipes from the recipe website Epicurious. Each recipe was also tagged with the cuisine it belonged to, and there were a total of 26 different cuisines. This dataset was initially reported in an analysis of flavor network and principles of food pairing.

Here is a part of the first few lines of data from the Epicurious dataset:

We use two approaches for the exploratory analysis of the normalized ingredient frequencies: (1) heatmap and (2) principal component analysis (pca), followed by display using biplots. The complete R code for the analysis is given at the end of this post.

There are a total of 350 ingredients occurring in the dataset (among all cuisines). Some of the ingredients occur in just one cuisine, which, though interesting, will not be of much use for the current analysis. For better visual display, we restrict attention to ingredients showing most variation in normalized frequency across cuisines. The results are shown below:

The figures look self-explanatory and does show the clustering together of geographically nearby regions on the basis of commonly used ingredients. Moreover, we also notice the grouping together of regions with historical travel patterns (North Europe and American, Spanish_Portuguese and SouthAmerican/Mexican) or historical trading patterns (Indian and Middle East).

We need to further test the stability of the grouping obtained here by including data from the Allrecipes dataset. Also, probably taking the third principal component might dissipate some of the crowd along the PC2 axis. These would be some of the tasks for the next post…

Here is the complete R code used for the analysis: