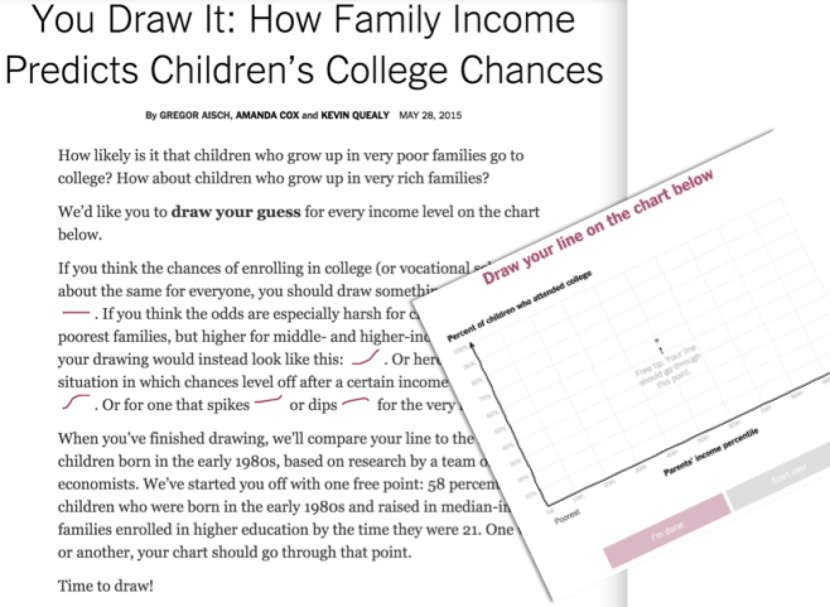 A couple of interesting devices for trying to engage folk in a data mediated story. First up, a chart that is reminiscent in feel to Hans Rosling’s ignorance test, in which (if you aren’t familiar with it) audiences are asked a range of data-style questions and then demonstrate their ignorance based on their preconceived ideas about what they think the answer to the question is – and which is invariably the wrong answer (with the result that audiences perform worse than random – or as Hans Rosling often puts is, worse than a chimpanzee; by the by, Rosling recently gave a talk at the World Bank, which included a rendition of the ignorance test. Rosling’s dressing down of the audience – who make stats based policy and help spend billions in the areas covered by Rosling’s questions, yet still demonstrated their complete lack of grasp about what the numbers say – is worth watching alone…).

Anyway – the chart comes from the New York Times, in a post entitled You Draw It: How Family Income Predicts Children’s College Chances. A question is posed and the reader is invited to draw the shape of the curve they think describes the relationship between family income and college chances: Once you’ve drawn your line and submitted it, you’re told how close your answer is the the actual result: Another display demonstrates the general understanding calculated from across all the submissions. Textual explanations also describe the actual relationship, putting it into context and trying to explain the basis of the relationship. As ever, a lovely piece of work, and once again with Amanda Cox in the credits…

The second example comes from Bloomberg, and riffs on the idea of immersive stories to produce a chart that gets updated as you scroll through (I saw this described as “scrollytelling” by @arnicas):

The piece is about global warming and shows the effect of various causal factors on temperature change, at first separately, and then in additive composite form to show how they explain the observed increase. It’s a nice device for advocacy, methinks…

It also reminds me that I never got round to trying to the Knight Lab Storymap.js with a zoomified/tiled chart image as the basis for a storymap (or should that be, storychart? For other storymappers, see Seven Ways to Create a Storymap). I just paid out the $19 or so for a copy of zoomify to convert large images to tilesets to work with that app, though I guess I really should have tried to hack a solution out with something like Imagemagick (I think that can export tiles?) or Inkscape (which would let me convert a vector image to tiles, I think?). Anyway, I just need a big image to try out now, which I guess I could generate from some F1 data using ggplot?