↓ Skip to Main Content
Home › Benefits of open data › 100 parliaments as open data, ready for you to use

100 parliaments as open data, ready for you to use 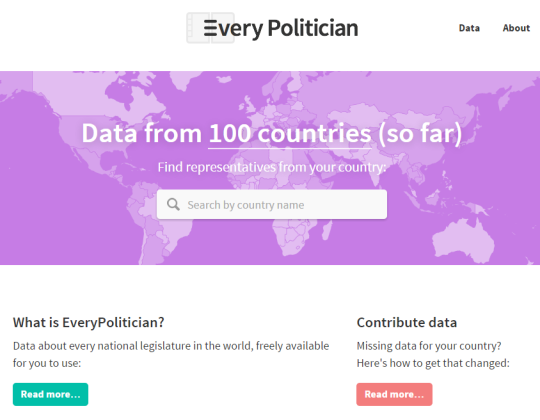 This post was written by Myfanwy Nixon and originally appeared on mySociety’s blog.

If you need data on the people who make up your parliament, another country’s parliament, or indeed all parliaments, you may be in luck.

Every Politician, the latest Poplus project, aims to collect, store and share information about every parliament in the world, past and present—and it already contains 100 of them.

What’s more, it’s all provided as Open Data to anyone who would like to use it to power a civic tech project. We’re thinking parliamentary monitoring organisations, journalists, groups who run access-to-democracy sites like our own WriteToThem, and especially researchers who want to do analysis across multiple countries.

But isn’t that data already available?

Yes and no. There’s no doubt that you can find details of most parliaments online, either on official government websites, on Wikipedia, or on a variety of other places online.

But, as you might expect from data that’s coming from hundreds of different sources, it’s in a multitude of different formats. That makes it very hard to work with in any kind of consistent fashion.

Every Politician standardises all of its data into the Popolo standard and then provides it in two simple downloadable formats:

This standardisation means that it should now be a lot easier to work on projects across multiple countries, or to compare one country’s data with another. It also means that data works well with other Poplus Components.

What can I do with it?

Need a specific example? Yesterday, we introduced Gender Balance, the game that gathers data about women in politics.

As you’ll know if you’ve already given it a try, Gender Balance works by displaying politicians that make up one of the world’s legislatures, one by one.

That data all comes from Every Politician, and it’s meant that the developers have been able to concentrate on making a smooth and functional interface, knowing that the data side of things has already been taken care of.

That’s just one way to use Every Politician data, though. If you’d like to use it in your own site or app, you can find out more here.

As you may have noticed, there are more than 100 parliaments in the world. In fact, despite having reached what feels like a fairly substantial milestone, we’re still barely half way to getting some data for every parliament.

So we could use your help in finding data for the parliaments we don’t yet cover, and historic information for the ones we do. Read more about how you can help out.